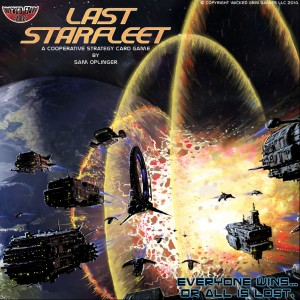 Space is a popular theme in modern board games. I think the reason this has happened, besides the popularity of Star Wars, Star Trek, and Battlestar Galactica, is that there is just so much you can do with it. Themes like races, resource gathering, combat, or colonization of planets are all things that you can do in the vast emptiness of space.

Today we will be looking at a co-op game, currently on Kickstarter, that focuses on the colonization of volatile planets. The year is 4010 and mankind still hasn’t gotten around to colonizing other planets, lots of red tape involved. In a tragic turn of events, the Earth explodes leaving only a small group of humans rallying to the nearest life-sustaining planet. Players will work together to colonize this new home world while dealing with dangers presented by the planet. Let’s dive a little deeper to see if this game is something you would like to support.

Last Starfleet is a 2-6 player, cooperative hand management game that plays in 60-90 minutes.

In Last Starfleet, players control one of six ships that are heading to this planet. Each ship is outfitted with a certain number of people aboard that will be used to replenish the human population. However, this won’t be as easy as just plopping the entire group down to the surface. The three possible planets are far from ideal matches to Earth and pose challenges to the ships and people. Each round, cards will be drawn from a planet deck that will have different effects on player’s ships and people on the planet’s surface. Players will have to combat these challenges with their own deck of cards to get 75 people onto the planet’s surface to win the game. If they are unable to do this, everyone loses and humanity is lost.

At the start of the game, players decide which of the planets they want to attempt to colonize. The planet board is placed in the middle of the table. The planet is separated into different sections where you can land people and there are also four atmosphere docks on the corners of the board (more on that later). Each of the different planets in the game has a separate deck that is mixed in with a standard orbit deck. Players will then decide on which ship they want to pilot. Each player ship has different abilities, strengths and starting colonists, so players will have options to choose from. Players will take people tokens and place them on their ship mat and the game can begin with players having three cards in their hand.

Each round is separated into three actions:

1. Draw Planet Cards
Players will draw from the combined orbit/planet deck with the number drawn determined by the number of players. These cards will have two possible uses. A small portion of these cards are designated as dock to atmosphere. These cards are placed onto the atmosphere docks around the board and will have constant effects until they are removed from the board. The other type of card is an action card where the effect of the card is carried out and then discarded.

2. Atmosphere Cards
If there are any ongoing effects from the current cards docked at the atmosphere docks, they activate. These cards will affect all ships or surface spaces on the planets when they are in play. Most of these cards do have a hit point total that can be removed by players attacking it on their turn. There are a few cards that don’t have hit points, will have to be removed by another atmosphere card or something from the player’s deck.

3. Player Turn
Each player will now each take a turn playing one card from their hand. Players have two types of cards in their hand. One is play cards which must be played on a player’s turn and immediately go into effect. These cards can be one of three types that are either one time use, used to upgrade a ship, or dock to atmosphere. The other type of card is a reaction card. These can be played at any time during a player’s turn when a required action has occurred.

After players have completed all their turns, they will draw another card and the round will start over. Players will have to work together to deal with constant challenges thrown at them by the planet in order to get 75 people from their ships onto the planet surface and win the game.

I love co-op games. It gives me a break from the typical every person for themselves that we see predominantly in board games. When I first got a chance to look at Last Starfleet, I wasn’t exactly sure what new twist this game would have. I was initially drawn to the theme, because it seemed like it would be Pandemic in space. After playing the game, I get the same feel as the classic co-op game but Last Starfleet is very different and that is a good thing.

The best part of this game for me is the variety that is in the box. This comes through in two ways, the ships and planet decks. Each one of the ship decks has its own personality and strengths. Certain ships are better at landing people on the surface, providing support to other ships, attacking atmosphere cards, and even getting stronger as things get worse. This adds an interesting element of constructing a team of diverse ships when you play with less than the max number of people. If you focus too much on one area, your chance of survival decreases. This element of uniqueness allows the game to be played with different groups of ships and still feel fresh. The same thing can be said about the three planets included in the game. Each one attacks the players very differently and this forces the players to change their strategy from one planet to another. The orbit deck being mixed in is a nice addition. It allows for some standardization between all planet decks.

Some of the most interesting cards in the ship deck are the upgrade cards. These allow a personality to develop for the player’s ship. These are extremely powerful upgrades that allow players to draw and play more cards on your turn, reduce the number of people required to win, adding more people to the planet each turn and many more. Each deck has more of these types of cards than the allowable spots on the ship mats and they lead to interesting decisions for players to make when deciding which ones to have in play. My one gripe with these is I wish there were more options for each ship.

Another positive for the game is there is less of a chance for a dominate player to take over decisions for the group. With so many varying abilities, it is necessary for every player to focus on their own ship. In my games, people would make suggestions for what they should do to the group, and unless someone had a better card in their hand we went with it. This allows for a sense of camaraderie to fester and you feel like you are working together. The game has some iconography that you will have to get used to, but it allows you to quickly see what kind of card it and when you can play it. This makes things a lot simpler when looking through a hand of cards.

The game play is very simple. First the planet acts, then the players, and then rinse and repeat. This is never bogged down by complicated actions on the cards and once you get the hang of it rounds occur very quickly. This simple element carries over to the player’s cards as well. There isn’t a ton of options for when you can play your cards and there are only three types of cards in the deck, however, this balanced by the vast array of things these cards can do. The real linchpin is you can only do one action per turn. You need to balance all the actions in your hand with what will be the most beneficial down the line. Plus, there are a lot of cards that require you to give up cards, people, or upgrades in order to use. This all adds up to a lot of strategic decisions you will be making in this game, which is a plus for me.

Overall, we had a lot of fun playing Last Starfleet. The game is no push over because the planets are very punishing and take no mercy. In order to win, the game requires a lot of communication and decision making by the group of players. Last Starfleet is a constant tug of war between dealing with the things the planet is throwing at you and trying to get people down on the planet surface. If you are looking for a new co-op game that puts the fate of humanity in your hands, consider giving Last Starfleet your support.

If you are interested in the game, it’s now in funding on Kickstarter and is scheduled for delivery in February of 2015. A pledge of $55 will get you a copy of the game and any stretch goals. You have until August 1st to become a backer so head over today if you are interested.