We review Kushi Express, a dexterity and pattern matching board game published by Mandoo Games. In Kushi Express, players are trying to quickly and accurately build Kushi skewers. 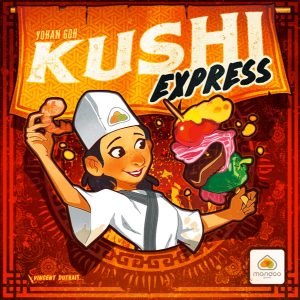 Kushi Express is a real-time pattern building game based on a famous type of Japanese cuisine on skewers. The best, boisterous experience is with three players since someone seems to fall further and further behind with full player count. If you feel comfortable with it, you can duel with one other friend and it’s just as fun, albeit a bit more quiet. I have never been great at real time, but when I skimmed through the rulebook to figure out if I wanted first dibs on this I was sold right away on the racing and yelling.

Kushi Express takes place over about 24 turns (or, orders). A plate is set at the center of the table, then the Shop Closing card is shuffled with 5 random order cards and acts as the game timer. Shuffle all other order cards and place them face down above the Shop
Closing card stack to form the draw pile. The first player reveals the first card from that draw pile.

Each player receives 4 ingredient cubes: meat, tomato, pepper, shrimp, and 2 topping strips: bacon and cheese, along with a skewer. All players must prepare their skewer exactly as shown on the order card then throw it on the plate, shouting “Bon Appetit”.

As soon as player places their skewer on that plate, everyone stops and checks to see if it matches. If it doesn’t, they cannot participate until the next turn and everyone else can continue to try and meet the order. If it does match, they take the order card but leave their skewer on the plate. This allows for a slight handicap as they must remove all their ingredients to catch up and try the next order.

One of the cards is a Touting card, which, when revealed, requires players to stand and yell “Kushi!” to attract bystanders, and the first person to do this can steal an order from the draw pile or from an opponent. Luckily there are only 2 of these cards in the entire game or else this would be annoying and pointless.

The game immediately ends when you reveal the Shop Closing card and you’ll calculate your score off Order Cards you gained. If applicable, ties are broken by one final turn Order Card.

If pattern recognition and being nimble is not your forte, and you’re a sore loser, this isn’t the game for you. Yet if you’re here to get excited and trash talk despite the outcome, this is for sure the game you want on your shelf.

The handicap on the player in the lead threw me off a lot because I kept trying to take back my skewer if it qualified for the winning points. I suppose it makes sense though because I wouldn’t just set a skewer in front of someone just to take it back before they’re even done eating.

Speaking of setting skewers on plates, it was unclear whether we were supposed to be rules-lawyering the orientation on the cubes. For example, if we’re trying to do this as exact as possible, the way that the tomato is positioned on the ingredient cube is different on the order card than it is on the cube itself. We didn’t bother about orientation for the sake of our sanity and game time, but this can be up to you and your group.

Yet, I really do enjoy the back and forth on the judging of the skewers, as I am very meticulous I can catch even the slightest difference from the actual order. Though it hits a bit close to home as I’m one of “those” complaint-filled guests whenever I eat at a restaurant… (excuse me while I hide in a corner due to my being called out by an adorable game like this).

I took the time to finish my order even though I didn’t qualify for the points anymore. I just had to end up with a sense of completion because of the small time investment. There was a spiritual aspect to the game of understanding how to relay the visual order cue to my brain and then to my actual execution of the order. Over time it became second nature to wrap the cubes, but at first, I was drawing a blank of how something would look and then how it would feel in my hands.

The real dexterity puzzle is in your nimble or clumsy fingers and getting to know the feel of the components. The familiarity of how to hold them against each other such that the skewer fits through nicely develops over several plays. I felt like I needed to practice when to assemble the skewer on the table vs threading one ingredient at a time. My update: I haven’t acquired the skill on this yet and what’s funny is that I have seriously considered training and practicing since my partner annihilated me the first time I played. This kind of learning experience makes it just as fun winning as it is losing.

My one and only serious complaint is the variable Shop Closing timer in the deck. More often than not it seems to only serve those who are slightly behind the leader because of the handicap. The game is also short enough that you could just do without the variable game end and just play through the entire deck like most games do. Your call, but my crew and I will be house ruling this.

At minimum, I honestly just love yelling Kushi without the touting card because the word is just straight-up fun to say.

Kushi Express is not for serious dexterity gamers as this is more about the excitement than anything else, but maybe that’s how it is a day in the life of a street vendor. In Kushi Express, everyone is hungry: you’re hungry for business and the customers are hungry for Kushi! You want to be the fastest, tastiest, and most accurate you can be. These orders can be wacky and unpredictable, and your opponents can be just as picky as your customers when evaluating your orders.

Final Score: 3 Stars – A quick-playing dexterity and pattern recognition game that will reward the nimble and quick thinking.

Hits:
• Components are pleasing to the touch
• Handicap on turn winner is seamless
• Skills for both dexterity and observation needed

Misses:
• Groupthink on quality assurance
• Touting card is not fun with cruel intentions
• No need for variable game end timer