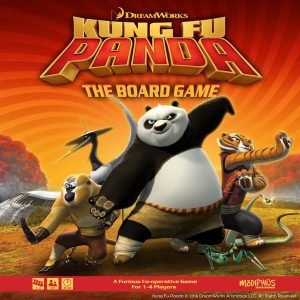 Thematic games that have strong intellectual property backing their experience haven’t always been kind to me, so I was a little nervous in my approach to this one. However, I will say upfront that I was pleasantly surprised and had quite a bit of kick and punch fun.

Kung Fu Panda: The Board Game is a co-op real-time game for 2-4 players that takes about 30 minutes to play. The best experience is with three players for just the right amount of chaos and chances for mission success.

First, choose whether you’ll just focus on one mission or have an adventure comprised of three missions. From there, choose the hero you’ll be for the mission: Po, Tigress, Viper, Monkey, Mantis, or Crane. They have different abilities, so choose wisely. You can also take that moment to maybe try and find some synergy with your other teammates. Other than that, the mission or adventure will tell you which Dial of Destiny to use, what the scene tile configuration will be, how many enemy miniatures will be placed, and any other obstacles or tokens on the tiles.

Each round is only a mere three minutes and the number of rounds is based on the mission setup. During the round, everyone rolls their action dice and spends them to take actions simultaneously. When attempting a reroll, one has to keep in mind that spending must be done all at once and not incrementally. They can also reroll any saved dice by going towards a different goal, so nothing is ever permanently locked.

Some actions you can perform are attacks like punch or kick, activating abilities or reviving heroes with chi, or make simple moves. Obstacles may require you to combine dice with other players and enemies have an exact combination of die rolls required to defeat them. The more complicated aspect of die rolls are claws, which advance the counter on the player’s Dial. The Dial of Destiny is one of the more difficult mechanics to manage in this game, as it can provoke attacks from enemies and spawn more of them.

When things get tough, the game also has special moves and hero abilities that can be used to help. They always require some amount of dumplings or chi, but can really turn the tables when the rolls aren’t working.

The game ends if you meet the mission or adventure’s win condition, or if the mission fails and/or when all players are KO’d and cannot be revived. You and your teammates can also just run out of time since the rounds are fixed.

One thing you will need to get used to right away before the game even begins is the actual setup of the environment. To me, it was very cumbersome and difficult to read the very small text or symbols marking the tiles. I can’t think of another way the rule book could have explained the setup without them, but just the execution alone can add a few extra minutes to the gameplay.

Once you get into the missions, they’re very engaging and not only incorporates some items or scenes from the movies, but also fits in with mission tropes you’re used to seeing in general. My personal favorite is the perceived hopelessness in battling hordes of enemies to stop them from unleashing some kind of ancient power.

As I mentioned earlier, some aspects of the Dial of Destiny that need to be resolved right away can really put a stop to some great progress your team is making. For example, maybe they’re about to enter into an area and you have been in a flurry of dice rolling and accidentally spawn a bunch of enemies onto the tile. Even worse, they may already be in the room and start getting attacked. Since you only have three minutes per round this is not something that one can easily mitigate.

The final piece of housekeeping I disliked in the game was maintaining the max limits on the enemies in the room. In practice, this may be a reasonable rule to implement because I imagine it would be awful to have unlimited enemies in the room that you may theoretically be unable to get through. My main complaint surrounding any amount of housekeeping comes from the time restraint so it seems the game really wants you to prioritize on the go.

The variable player powers were fairly disappointing and we found it was almost better to ignore that and just find ways to buy cards from the market. When things get too overwhelming and the attacks start coming in, the game does provide a way to help out your knocked out friends as well. In all actuality, I found it was actually hard to get help from teammates without performing the “lay your character down” suggestion in the rules. Even then, I think a majority of the attention was dedicated to rolling dice and evaluating re-rolls and allocations instead. I literally had to wave my hand in front of someone to get some help during the round.

The missions included with the game kept it fresh by introducing new mechanisms like levers to activate, or walls to smash down; which made it feel like a real mission. Some terrain even has movement requirements that are harder than normal because of the nature of the environment (e.g. getting onto a roof is a bit harder than just walking along a dirt path). These sorts of games can easily turn into just a generic dungeon crawl but it seems that the level designers were cognizant of staying away from that for Kung Fu Panda. Even the number of enemies that spawned or were in the initial setup felt balanced.

Any time I see the word “simultaneous” in a board game I am both scared and excited; scared at how messy it could be and excited at the game not taking an excruciating amount of time. You get exactly what you expect here. Kung Fu Panda: The Board Game is indeed a frantic dice rolling cooperative game that keeps the excitement alive throughout. This game is for those of you who enjoy real-time cooperative games with a martial arts theme. Admittedly, this is a major bonus for those who like the lore and style of Kung Fu Panda. While the setup can be a little tedious, the fact that the missions and adventures that come with the book have stories behind them to tie in the environment together makes it worth it. After that, you just need to be okay with your plans falling through while attempting to collaborate with your team.

Final Score: 4 Stars – Work with your teammates, roll dice in a flurry of obstacles and enemies in the world of Kung Fu Panda.

Misses:
• Unclear rules on allocating dice
• Setup is cumbersome
• Planning can be futile