We review Koi, a hand management and action programming game where players will play cards to move their Koi around to board to eat dragonflies and frogs to score points. The player with the most points at the end wins. 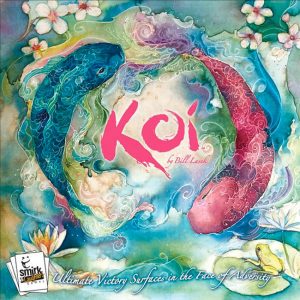 I used to work with a close friend over my college summer breaks. Since I didn’t live that close to where we worked, I used to stay a few nights at his place during the week. He had a nice deck that overlooked a large koi pond. There was plenty an evening after a long day sitting on that deck, having a few cold ones, and watching the koi. I must admit it was a rather tranquil way to end the day and I was rather surprised how peaceful to was to watch those large colorful fish swim and eat.

This brings us to today’s review of Koi from Smirk & Laughter Games. In this game, players will play cards and move their koi around the board trying to eat dragonflies and frogs to earn the most points. Koi is a hand management & action programming game for 1-4 players that plays in 40-60 minutes.

The starting game length will be 7 days (rounds) and 6 weather cards are placed aside for each day (except for day 1). Weather cards will have actions that all players must follow for that day. Each player also receives a hand of koi cards.

Koi cards are read from bottom to top and have mandatory movements marked in black with optional ones in blue. These are the cards players will use to move their Koi meeples. Koi cards also show rocks, a frog, a lily pad, or cherry blossom and when played a player may place these onto the play area.

The first player may take the following actions at the start of the day:

After the first player’s turn ends, you check for a flood, which initiates if there are no dragonflies left on the board.

Play then continues to the next player and they have the same choices as the first player as outlined above. After all players have taken their turn, each player advances their scores 3 points for each dragonfly and 1 point for each frog eaten. The player with the lowest score becomes the first player and play continues for 7 days and the player with the highest total at the end of day 7 wins.

In regards to the components in Koi, it’s worth noting that the art and production is excellent. From the rulebook, game board, koi cards, and weather cards all include beautiful and tranquil artwork. Even the game meeples, especially the Koi, match colors and even have spots or are speckled like the actual fish. Overall, it’s all nicely done and eye catching.

The one game mechanic that is a slick equalizer for all players is a flood. After a player removes the last dragonfly on the board and ends their turn, a flood is initiated. This means that all koi tokens are moved to the outer edge of the board, frogs and cherry blossoms are removed from the board and lily pads spawn dragonflies. If you’re the starting player you have a decent advantage to claim points but a flood balances the playing field by refreshing the board for all players. This mechanic gives everyone a chance to score points each day. Now, lily pads do spawn dragonflies at the start of each day but if a flood is triggered it refreshes these during the round, not after.

I think the best balancing mechanism is the starting player reassignment. After the end of each day, if you’re the player with the lowest points, then you become the starting player for the next day. As I mentioned above, being the starting player is a great advantage given that you able to move first and can try to claim points before other players. The main advantage for all players is that this does keep the game fairly close and keeps the amount of runaways down which should keep most players engaged and in striking distance of a possible win.

Now, as I said in my introduction, and I believe the theme that is trying to be expressed by Koi is a tranquil game of hungry, colorful fish that emulates a peaceful environment. But the game itself is mean and not very peaceful. Koi definitely has a “take that” feel when you place koi cards such as rocks to block other fish, place frogs to eat dragonflies other players cannot claim, or by placing cherry blossoms to move tokens away or to your koi. At times it can feel very cutthroat, especially if you’re the player in the lead.

I must warn players that luck can also be significant to the game play. The cards move your meeple, but having too many cards which place items (rocks, lily pad, frogs, etc.) will keep you from collecting needed points. So, players really need to have a good mix of movement and object cards. The koi cards are rather precious, but as outlined in the overview, you can cycle cards on your turn to try to help your luck of the draw. Unfortunately, cycling cards gives back 1 less of what you discard, so at a minimum losing 2 to get a random 1 usually doesn’t help your luck in too many cases.

I have said it before that I usually don’t care too much about a game’s theme. There are some themes that I’m drawn too but solid game mechanics will win me over every time. Koi’s theme is one that projects peace and tranquility, however readers should know that the “take that” meanness of its game play conflicts with the artwork and projected theme. I honestly don’t mind the mechanic but it seems to better fit with a cut-throat Smirk & Dagger game than the typical family friendly Smirk & Laughter one.

In any case, Smirk & Laughter Games has made a well-balanced and fun hand management and action programming game with Koi. Elements like a flood and the first player reassignment both help to balance the playing field for each player and keep them in the race to gain the most points. Luck unfortunately is significant to the game play and even cycling of cards sometimes will not help bad luck.

Misses:
• “Take that” conflicts with theme
• Luck is significant to gameplay