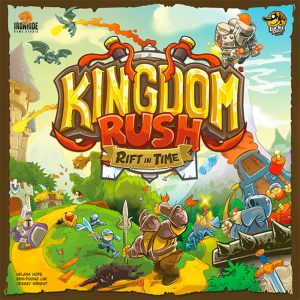 At the end of the age of Towers, the Kingdom puts away their weapons of war. But the Dark Mage watched, and once the last tower had been dismantled, he began sending waves of forces through a hole ripped in the fabric of time!

In Kingdom Rush: Rift in Time you and your allies must work together to fend off the furious onslaught of the mysterious Time Mage. Kingdom Rush is a cooperative tower defense game for 1-4 players. Each scenario (currently ten included) lasts about an hour.

Kingdom Rush: Rift in Time is a fully cooperative campaign board game based on the wildly popular tower defense Kingdom Rush app games. In it, you’ll use towers and heroes to defeat waves and waves of enemies bent on the destruction of your kingdom. The only way to quell the onslaught is to close the portals, but you’ll have to do this while holding back the forces of the Time Mage as well!

Waves of minions enter the playing field in groups, hoping to move across the field to attack your kingdom. Players will join forces to build and upgrade towers to repel the invaders. Tower fire of different types can damage minions but may be limited in range and direction until they’re upgraded. Heroes also move about the board with unique abilities to help do damage to the attackers.

Inflict damage on minions to destroy them and prevent damage to the kingdom is one goal, but your true target is closing the purple spawn portals. Upgraded towers and heroes can help take these out. Ultimately, you’ll need a good strategy based on controlling minion waves while taking out portals to defeat the Time Mage.

There are ten scenarios included in the base game. Players win by closing the portals before the kingdom is overrun by minion waves (losing all its hearts).

Converting video games to board games seem to be a tricky business – you either wind up with a fantastic experience (The War of Mine) or a pale comparison (7th Guest). Lucky Duck has done an OUTSTANDING job converting the frenetic, strategic feeling of tower defense to the table top.

Initial waves of minions may seem somewhat simple to defeat but plan wisely – it won’t be long before there are too MANY on the field. The polyominoes create an almost tetris-like puzzle in every minion tray, adding to the puzzle-like feel of gameplay (and are SO satisfying when you can get a perfect set laid).

Additionally, remember that it’s cooperative! The entire group will need to work together to upgrade towers or move powerful heroes to just the right spots. Heroes each have unique powers to deploy and can turn the tide of a battle and upgraded towers can fire further and inflict damage on portals. You’ll want to form strategies as a group to act the most efficiently.

The game art is taken directly from the game so it should look familiar to owners of the app. My favorite component are the minion trays. These are thoughtfully constructed to move waves of enemies across the board without picking and up and counting spaces for every single one.

Scenarios will scale over time, and the maps and placement will change, meaning no two games will be quite the same, and your group will meet with more challenges as you continue through the campaign. If your game group is also a fan of tower defense or cooperative strategy this is sure to hit the mark

Lucky Duck’s board game port of the popular tower defense app is sure to delight fans and create new ones. Kingdom Rush: Rift in Time is an exciting, thinky cooperative strategy game. Thoughtful design evokes the feel of tower defense on the tabletop. If you are interested in getting a copy of Kingdom Rush, it’s wrapping up its funding campaign on Kickstarter. Head over today to become a backer or for more information.