We review King Chocolate, an economic and tile-laying game published by Mayfair Games. In King Chocolate, players are trying to earn the most money by controlling the steps of turning cocao pods. 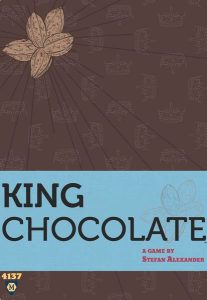 Welcome to the first of many reviews from a new series I’m calling “Old Man, Old Games.” This is where I look at old games in a traditional review, but also determine how well they stack up against new games. Not every good game is part of the new hotness, and I want to give light to some older board games. Why is it called “Old Man, Old Games” when I am the youngest person on the Board Game Quest staff? Maybe one day I’ll reveal why…

But for many gamers, theme reigns supreme. Monsters, aliens, soldiers, and civilizations are just a few examples of characters and ideas can draw players in when attached to a board game. But while those are some of the common ones that can hook a player, there are times when the unusual gets players more excited than the common. That tends to be my experience when pitching King Chocolate based on theme. Players control the steps of turning cocao pods (where the bean is held) into many forms until after six steps, the cocao is now chocolate and sold. And yes, it is cocao as opposed to cocoa, I had to look it up as well.

The theme sounds incredibly unique, right? Well, you can forget the theme once play begins and the tiles are placed.

King Chocolate seems straightforward upon learning the game. The game has money that players earn. There is a huge pile of brown cocao cubes that will get plenty of use. There’s a stack of double-hex tiles that will have a different stage of the six stages printed on either side, and the players specifically get workers and a player screen in matching colors.

On a turn, the active player must place a tile that they have behind their screen, adding it to the starting ring and other tiles that have been placed. This is mandatory, and if the active player cannot play a tile, they must draw two tiles from the pile, playing one, keeping the other, and skipping their turn.

Then, they have four actions to choose from, but three action points (AP) to use on any of them, including taking an action multiple times. The big one that will be a common action is to place a worker and populate a group. One of the workers is placed on a group of a matching stages that does not already have a worker there. Then, cubes are placed on the entire group for each circle printed on the tiles. The catch for this action is that it costs two action points.

The other three actions all cost one AP, and each have their own purpose and importance. One action is to draw a tile to be put behind the player screen. Another action is to move a meeple from one group to another. This is the most situational action, primarily done when an unclaimed group has an enticing number of cubes.

Maybe the most important of the one AP actions (and the final option) is production. The active player chooses a group with cubes on it and moves the cubes to a group of the next step in the production sequence up to the number of empty circles remaining in that group. The owner of the group where the cubes left is paid a dollar per cube that moved. The active player can choose a group owned by no one, themselves, or another player. They can also add cubes to a group in the first production sequence or move cubes back to the supply from a group in the last production sequence.

Once the display of four tiles can no longer be filled back up to full, then the game will end after one final round, and the richest player will win.

I can say from the get-go, the board is divisive to say the least. Looking at the hexes, they have different colors and tallies to show which step is which. To be frank, none of them have a connection to their theme that helps them distinguish the six steps. Now I had someone in a recent game point out the there is an image in the background on a hex that represents each step, but the art is so inconspicuous that I couldn’t tell that the pictures were anything more than background textures.

When the tiles interlock, it’s a bit confusing to parse. I personally have trouble remembering, which is the fourth step versus the fifth, so many times in a game I glance back at my player board for a refresher. While the information is readily available, the graphic design and art should help the players, not hinder. The art also does not help with the theme. Outside of the chocolate-colored cubes, the cocao-factory vibe is lost once the rules explanation finishes.

But here is where those things take a back seat. The gameplay for King Chocolate is quite unique. I owe it to Ethan from No Rules Review for best explaining it simulates the differences in vertical and horizontal integration. For this game, do I move the cubes through all my own groups and pay myself each time (vertical integration)? Or instead, should I monopolize a single step and require that other players use my groups (horizontal integration)?

Turns are fast due to the simplicity of the actions but knowing how to best make money is key. But not only are you looking at how much money you make, but how much money you give to your opponents. See in King Chocolate, there are many times where it is necessary to use the cubes in an opponent’s group, thus giving them money. If that becomes a regular occurrence, you have become their primary source of income, and can even hand them the game.

There are also instances where players can basically shut others out. Two players close together in the cocao steps strategize that supplying each other will net them beaucoup bucks, in turn rushing themselves far ahead of the pack. It’s a complaint I heard and recognize as legitimate in my experiences.

King Chocolate is not a perfect game. It’s not easy to look at for enjoyment of the art as well as deciphering moves. And depending on the table’s play, some players may fall behind due to alliances. But where King Chocolate falters, it offers many positives for a quick and streamlined economic game.