We review the party game Jungle Speed by Asmodee Games. Jungle Speed is a fast and easy to learn card game for up to 8 players.

When I’m looking for a good party game, my requirements are: very easy to teach, interactive, able to accommodate a large group of people and a quick play time. No one wants to sit through a 20 minute rule explanation when you are just looking to drink and have a good time.
So when I’m making my decisions on which games to bring to a gathering, one of the first things I grab is the bag (yes, it comes in a zebra patterned bag) for Jungle Speed

. With about 2 minutes of rules explanation, a play time of 10 minutes and a whole lot of interaction, Jungle Speed

has yet to disappoint. 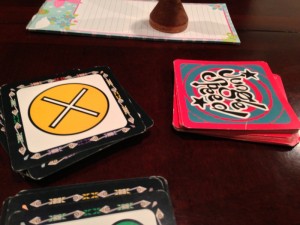 The object of Jungle Speed is to get rid of all the cards in your deck. Each player has an equal sized deck full of cards with various shapes on them. Play progresses by players flipping over cards until two people are showing matching cards, in which case a mad grab for the totem in the middle of the table occurs. The winner gives their face up cards to the loser and play continues until someone is out of cards.

There is not a whole lot of components to Jungle Speed. There is a deck of square cards, each with a colored shape on them. While the cards are high quality,  unless you decide to sleeve them, there is a good chance they will show some ware fairly quickly. Normally, that would infuriate me (as I like to keep my games in pristine condition), but as Jungle Speed is a chaotic party game, I don’t mind that my cards have a a lot of “Love”.
The other item of note is the Totem. A small, wooden…cylinder…for lack of a better word, that sits in the middle of the table. I should note that while my edition has a totem made out of wood, newer editions have the totem made out of foam/plastic. I’m not sure if this is to lower the production costs or to help avoid collateral damage (more on that later), but I enjoy the weight of the wood one and would say to get that version if you can find it.

As mentioned earlier, the game play is simple enough. Once the cards have been divided into equal piles, one player begins the game by flipping a card face up. Then the next player does likewise. The game progresses in similar fashion until 2 players are showing the same symbol. When this occurs, the player who ended up holding the totem gives all their face up cards to the loser. They go on the bottom of their current card stack, to be played eventually. Be the first to get rid of all your cards and you win.
The game throws you a few curve balls via some specialized cards. They range from everyone playing a card at the same time to just a made grab to be the first to snatch the totem. Another will change the game play so that you ignore shapes and focus only on color.
And that’s it. The game play is simple, quick and intense. 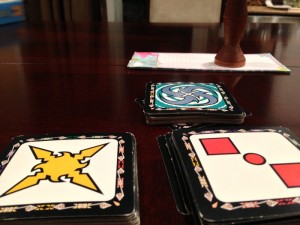 So what is it like to play? A whole lot of fun, for one. Most of my games with new players start off the same way. Everyone casually flipping cards as they go around the table. As players start to lose duels and acquire more and more cards, you can feel the tension increase. People will start to inch closer the the totem in the middle of the table until a match occurs. When that happens, look out, all hell can break loose. At least once or twice during the game the totem will go flying across the room as someone misses their grab (woe to the player that knocks it over accidentally, you must take all the face up cards on the table).
When playing Jungle Speed, drinks and food are not allowed on the table. Women should be required to remove their sharp wedding rings. To put it bluntly, someone will get injured. Usually it’s in the form of scratches or cuts from people’s fingers as they lunge for that elusive totem. I have seen a player literally pulled across the table as two combatants fight for control of the totem.
And that’s where the real fun in Jungle Speed lies. The chaos. Almost always, at some point in the game, 2 players will maddenly fight for that totem. Sometimes it even ends up bordering on a wrestling match, but in the end, someone will be holding the totem while the rest of the players are laughing hysterically. It’s truly a sight to behold.
So yes, Jungle Speed is not for the casual group looking to play word games. It can be intense, highly competitive and there is always a chance a slight injury may occur. Yet it’s usually an exciting ride. 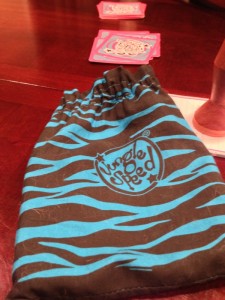 So it should come as no Surprise that Jungle Speed

is one of my favorite party games. Quick, easy to teach, able to accommodate up to 8 players and highly interactive hit all the right check boxes in my party game requirements. Jungle Speed is not going to win anyone over with its deep theme or high quality components. But that’s ok. This game is truly about the play experience.

is also a game where it helps to have the players in the right mood. If you are looking for a relaxing game to end your evening, this is most certainly not the right choice.
However, if you want something new to teach your gamer and non-gamer friends alike, than look no further. Just try and make sure nothing breakable is around.

Final Score: 4 Stars – A fast paced and interactive party game that can accommodate up to 8 players. Perfect for your next social gathering.

Hits:
• Finish a game in about 20 minutes
• Very easy to explain rules
• Highly interactive
• If you are highly competitive, you’ll love this chaotic game.

Misses:
• While is can play with 2-8, you really need at least 4 people for this game.
• Injuries may occur, property can be damaged. (Can also be considered part of the enjoyment.)