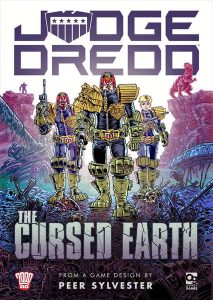 There is something about the 70’s comic styling of this game that just speaks to me. Like many things from a few decades ago, it just feels primed for a comeback. I don’t have any familiarity with the original comics, my only Judge Dredd exposure is the very bad Stallone movie, but knowing the game is a reworking of the well-received Lost Expedition made me interested enough to give it a shot.

Judge Dread: The Cursed Earth is a cooperative game for 1-4 players that takes about 30 minutes to play.

Judge Dredd: The Cursed Earth has three different game modes—solo, cooperative, and competitive. Solo and cooperative have only slight differences, where competitive keeps most of the same mechanisms but obviously changes a few key rules about how the timer in the game works so players are on equal footing. That said, it’s best experienced in the cooperative mode without a doubt.

Players are the role of the Judges, trying to reach Max Normal, a citizen who is infected with a deadly virus who happens to be really important in saving the world. The villains are after him too and have a head start.

During dusk, the cards will be resolved in the order they are played. Again, there is a slight variation for the solo game but the general premise is about the same—during dusk it’s harder to plan for exactly what route you’ll take through the obstacles.

Resolving the encounter cards will also present the players with some choices. The boxes on the encounters are color-coded: yellow is mandatory, blue is optional, and if red boxes are present you choose one of them. Generally, the encounters cost you some of your resources—ammunition, health, or food rations. You’ll also be subject to more-than-slight radiation in the Cursed Earth, potentially ending your world-saving mission prematurely. The encounter cards will give you opportunities to advance to the next location in the Cursed Earth, bringing you closer to Max Normal and victory. But the bad guys will be moving along too. Reach Max Normal first and you’ve successfully saved the world.

If you are familiar with the Judge Dredd comics and you really have a feel for The Cursed Earth, this game will likely come alive for you. Each encounter card is beautifully illustrated and look like they were pulled right out of the comics. The rulebook starts off with a short two-page comic to get the non-initiated like me up to speed well enough.

The reality is the theme is pretty pasted on. Clearly, since the game is a reimplementation of The Lost Expedition with only slight changes. You really have to use your mind’s eye quite a bit to make it feel like much other than resolving symbols on cards. If you don’t have much of an attachment to the IP, you’ll probably struggle there.

And unfortunately, that part of the experience kind of sinks the game as a whole. Judge Dredd: The Cursed Earth hinges upon you really feeling like you are in the role of the Judges. The strategy here is pretty light and heavily dependent on which cards come out. The most important thing you can do during the game is to advance your judges to the next location, but you can’t just choose to do it whenever. You have to have an encounter card come up that allows you to progress and have the resources available that it demands. There are significantly more chances for the bad guys to advance making the deck certainly feel stacked against you.

The game is just incredibly difficult, you’ll find yourself losing and losing a lot. Generally, I love difficult cooperative games. Some of my favorite gaming sessions are from losing dozens of times. But the fun in losing is an experience where you feel like you are just this close. And if you would have maybe done something differently a turn or two ago you could have made it out alive.

Rarely did I feel that way in The Cursed Earth. The vast majority of the decision making is trying to set up the encounters in such a way that you’ll skip over the really bad ones. But with limited information (or random flips from the deck in the solo game) the best-laid plans don’t necessarily always come to pass. The competitive mode doesn’t help much here either as it feels similarly weighted toward lucky outcomes rather than clever plays.

If you are a big Dredd-head (I assume that’s what the fans would call themselves) you certainly should pick up Judge Dread: The Cursed Earth. The artwork is killer. With a bunch of background on the characters, the world, and the story I think the experience would be memorable, even if you feel a bit like you are up to the whims of a random deck of cards.

For the rest of us, Judge Dread: The Cursed Earth is a pretty game, but one that is let down by how punishing it is and how little agency the players have. Games rarely feel tense and when you inevitably lose it rarely feels like you were a fair shake.

Misses:
• The outcome is often controlled by which encounters come up.
• The rules for scaling difficulty don’t make the game much easier.
• Many of the decisions left to the players don’t feel impactful.