We review Jinja, a worker placement and area control game published by WizKids Games. In Jinja, players are placing shrines around Japan trying to secure the most honor. 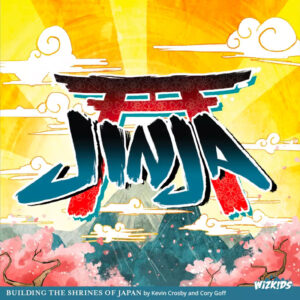 The major jinja shrines scattered throughout Japan’s countryside are places of spiritual significance, easily recognizable by the large red torii gates that mark the passage from the ordinary world into the sacred realm. Whether walking through the tunnel of torii gates of the Fushimi Inari Shrine in Kyoto or marveling at the sea-bound “floating” Itsukushima Shrine’s solitary gate, these locations command respect and honor. They are the homes to enshrined deity spirits and are said to bring good fortune for those willing to pay respects.

Jinja, published by WizKids and designed by Kevin Crosby and Cory Goff, is a two- to five-player worker placement and area majority/influence game that plays in sixty minutes. How do these mechanics match the spiritual theme on display? Let’s pass into the realm of the review to learn more.

In Jinja, the player’s job is to build new jinja shrines throughout seven territories of Japan, each comprised of multiple temple locations. Gameplay spans five seasons, in which players work to complete shrine Deeds and earn victory points, or honor, for their efforts. Honor is also awarded during final scoring via regional area majorities and through requirements met on Omikuji (Japanese fortune-telling paper) cards.

Before each game, players are dealt five of the Omikuji cards and must choose three to keep as secret goals. This choice will give them direction on where to build their shrines. Then players are dealt six Deed cards to draft by selecting one and passing the remaining cards clockwise. This continues until all Deed cards are claimed.

Every season has three phases, starting with a “beginning season” phase that adds structure tokens to each territory via a supply bag. There are four structure tokens in total and each shrine’s Deed card features certain structure requirements to be completed. Next, a season card is revealed that will affect the game state in some beneficial way.

The second phase is worker placement and comprises most of the game. Players will take turns placing their limited supply of workers onto various worker and territory locations on the board. The worker placements spaces may allow players to gain new structure resources, gold, or additional Deed and Omikuji cards. The territory locations allow players to gain the random structures that have been placed on the territory. Placement on these locations also allows players to build a new shrine.

To build a shrine, players reveal the respective Deed card from their hand, place it into their tableau, and return the required structure tokens to the supply. They then place one of their shrines onto the board in one of the available, but limited, territory locations.

Each worker placement space is restricted to one worker, a rule that can only be broken by spending a rare and limited Fox token that is given to certain players based on their order in the opening turn structure. If not used at all during the game, this Fox token is worth three honor during end game scoring.

The final phase of each season occurs after all workers have been placed. At this point, workers are returned to each player’s supply. Then lantern bonuses located on each territory are awarded to those who’ve built shrines in these locations. Then players are given a chance to use the End of Season bonus that’s printed on each built Deed. These can range from gaining gold, paying for additional structures, or flipping lantern tokens to change their payout. Finally, the first player marker is passed clockwise, and a new season begins.

Jinja is a strange beast. It takes several popular mechanics and tries very hard to make the most of them in this relatively quick game. And while the theme was intriguing at the outset, it quickly becomes lost in the machinations of each action. I knew immediately that I was responsible for building more shrines across Japan, but ultimately the reason for doing this, outside of scoring honor, didn’t resonate with meaning.

This disconnect is most apparent in the artwork and graphic design. It’s the first thing anyone will notice with the game’s cover—it’s bright, loud, and quite counterpoint to the serene and spiritual setting of the game’s narrative. In fact, it harkens to the illustration on display in the popular video game Okami, but without the watercolor movement, it doesn’t quite work.

I do applaud the artist Lamaro Smith for attempting to breathe life into the stale beige game art we see all the time. Unfortunately, the uninspired design of the Deed cards, and especially the bland gray worker placement locations, really pulls away from a cohesive vision. The illustrated Japan on the board looks great but is covered up by symbols and minimized to make space for both the boxy worker placement locations and end of round/game information. If something could’ve been done to integrate the areas of the board to allow the land to shine, it would’ve provided a more fully realized world. A final note on the art: the Kitsune cards are gorgeous. The season cards feature wonderfully detailed spirits that seem to be a step above the rest of the artwork.

Beyond artwork, the gameplay does have interesting elements; however, it isn’t as compelling as I’d hoped. The best part of the game is the restrictive space that’s developed from the outset via card selection. Due to drafting, players can attempt to plan a path to victory, and coupling these decisions with their Omikuji choices can make for a compelling puzzle. That said, it can be hard to gain more cards throughout the game, so players may be saddled with poor options based on the luck of the draw.

And while the drafting mechanic feels warranted, the worker placement in the game is quite lackluster by comparison. Players are given the option of placing on worker or territory locations, but the restriction of having only one worker per space can make for frustrating rounds. There’s not enough dynamic decision-making via these placements and many times players can be completely blocked from gaining the specific structures needed to build a shrine. In a five-round game, this can become a major setback. The designers attempted to mitigate this by allowing players to gain points by spending gold, but for a game that is all about building shrines, it feels like a subpar option and counter to the overarching theme.

An aspect that does provide more dynamic decision-making space is a lantern mechanic that’s attached to both the territories and the Deed cards. These lantern tokens, seeded randomly onto the territory locations at the beginning of each game, have hidden bonuses on the back that can be activated—and deactivated—during play. These lanterns will be flipped from a lesser bonus to a more robust bonus, and back again, many times, and can be a way to help yourself or hinder an opponent.

I’d be remiss to not mention the other random elements on display: dice rolling to determine the number of resources gained, blindly pulling structures from a supply bag, and the randomness of drawing Omikuji cards. Each make for a much more tactical experience in a game that starts by asking you to make strategic decisions. And to add to the dichotomous nature of play, one mechanic asks players to dig through a discard pile to add new Deeds to their hand rather than draw randomly, which increases the time between turns as players try to align the best options for their available resources.

There are certainly several areas where Jinja shines, though these areas are minor portions of a game that isn’t quite sure what it wants to be. Ultimately, Jinja feels like a design that came from a team who didn’t share a common vision on what they wanted to produce. As such, it showcases a story of two halves. Jinja is certainly playable, and those who are unfamiliar with these mechanics may delight at the decision space. For us, it didn’t do any one thing well, and with that did not pass from the world of ordinary into a sacred realm.

Final Score: 2.5 Stars – Jinja attempts to meld familiar mechanics into a uniquely themed puzzle but ends up feeling more pasted together than cohesive.

Misses:
• Worker placement is uninspired
• Too much randomness
• Theme disconnected from gameplay