We review Jetpack Joyride, a real time, tile placement board game published by Lucky Duck Games. In Jetpack Joyride, players are trying to quickly and efficiently place polyomino tiles through a side-scrolling grid. 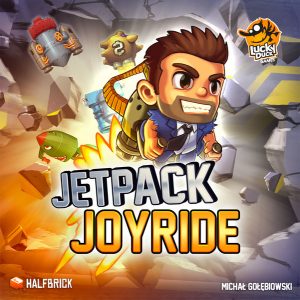 Strap on your jetpack and escape from the lab, avoiding burning lasers and explosive missiles! Based on the app of the same name, Jetpack Joyride is a light hearted, real time puzzle game from Lucky Duck Games. And if it fits into my pocket as neatly as my phone does, I might carry it with me everywhere.

Jetpack Joyride is a real time, tile placement game for 1-4 players that takes about 20 minutes to play. It plays best with 4 players.

To start, players are each dealt four lab sections numbered 1 to 4, which they’ll line up in front of themselves. Three mission cards are flipped out, defining bonus points for the round. The gameplay is comprised of three rounds. Each round has three phases: the run, scoring, and cleanup.

The run phase starts with the youngest player announcing the start. Players then race to grab polyomino shaped track tiles and place them one by one into their lab. Players start at the left and move through their lab cards, remaining inside the boundaries of those cards, attempting to be the first one finished with their final card. The goal is to attempt to gather coins, avoid hazards, and fulfill missions as tiles are placed.

Once someone has made it through their lab or all the track tiles are used, the run ends. Scoring for the round consists of adding together covered coins and bonuses from gadgets or missions, and subtracting any covered hazards. Once scores are tallied, deal out a number of gadget cards equal to the number of players. Starting with the lowest scoring player, choose a gadget to help with future runs.

Finally, during clean up, all tiles are cleared and placed back in the center and lab cards are passed to your neighbor. Play continues through two more rounds, with the win going to the player with the highest score!

I like phone app games. Portability aside, they’re easy to start and there’s usually not a ton to understand. The Jetpack Joyride app is a great example—fire it up and get your little Jetpack Jill through the maze. Lucky Duck’s cardboard port does a fantastic job bringing that experience to the tabletop.

It is a little larger than my phone, but the diminutive box size would fit into a larger handbag or backpack. You could even place the tiles in a drawstring bag and throw them and the cards in a quiver. I appreciate that Lucky Duck chose a small box that fits all the components instead of a big one that’s half air.

Setup is a snap. Choose and layout your lab cards, dump the track tiles in the center, place the mission and gadget decks and you’re ready to go. No fiddly twenty minute set up—which is fine for a 3-hour euro brain burner, but it is mad frustrating when it takes longer to set up and put away the game than it does to play. There’s also a solo variant that sets up and plays fast enough that I don’t just feel like I should have fired up a phone game.

You can explain this in less than five minutes. Anyone who has played a side-scroller is going to pick up on the main mechanic immediately, but even player unfamiliar with the platform will catch on pretty quick—get through the lab, don’t get hurt, collect some coins. Check cards for bonuses or strategy. Bam—you’re ready to play.

The art is cute and quirky, just like the phone app. I’m crossing my fingers that Lucky Duck considers an expansion that includes more of the app based upgrades and more labs. The yellow clear polyominoes and lab tiles with mostly dark backgrounds make it relatively easy to see what’s under them in most spots. A couple of sections of lab do fall down on this slightly but overall it’s better than many. Passing the lab cards seems so basic but it’s a clever little ploy to make you feel like you’ve advanced to a new level.

Lucky Duck is killing it in app game to board game ports and Jetpack Joyride is no exception. Fans of side scrollers will get a kick out of this, and families will likely find this a great addition to game night. Jetpack Joyride is quick to set up and teach, you’ll be grabbing tiles and jetpacking through this one in no time.

Final Score: 4.5 Stars – Like side scroller apps and competitive real time games? This one is for you!

Hits:
• Quick to set up and learn
• Perfectly evokes the feel of a side scroller
• Solo version is almost as snappy as loading an app

Misses:
• A few lab tiles could use slightly better visibility
• I find myself wanting just a few more items and fun perks from the game