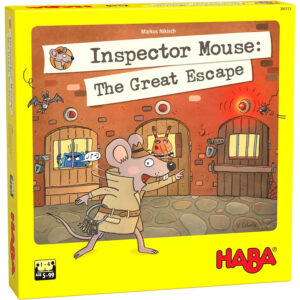 A rash of crimes have broken out and the local jail is being overrun with criminals. Full disclosure: most of the criminals are animals. And in a few cases, they actually appear to be law-breaking dessert items.

But it’s okay because you’re a mouse. An inspector mouse, that is, one who must catch the criminals before they successfully orchestrate a prison break. That’s the setup for HABA’s new children’s deduction game Inspector Mouse: The Great Escape.

Like many HABA games, Inspector Mouse’s box is an integral part of both setup and play. Before the game starts, players will use the game box to build the prison that the titular Inspector Mouse is guarding. The prison consists of three cardboard pieces that lay on top of each other. Each piece has disc-shaped holes into which players will add new criminals to the prison.

The hole on the underside of the prison board allows criminals to secretly attempt an escape once their disc has reached the special “escape tunnel” space. (One wonders why the mouse warden doesn’t correct this after the first escape attempt, but I guess it’s a budgetary thing.) The escape tunnel drops the criminal token on top of a metal bell piece that lets out a soft chime during an escape attempt.

Each turn, the active player will roll a die that tells him or her which direction to rotate the entrance of the jail. That player will keep rotating until there is an open slot at the entrance and then they will add a new criminal face up to that spot. Players will want to keep track of which criminals enter at which position because as the jail entrance gets rotated clockwise or counterclockwise it will become more difficult to remember the order.
Once the jail is full enough, the rotation will cause one of the criminals to attempt an escape as their token drops through the hole above the alarm bell piece. Players will need to listen carefully for the alarm, after which they must try to decide which criminal it was that was attempting the escape.

There are two main ways to play the game: a cooperative version where everyone can discuss their choices and a competitive version where players secretly pick which criminal they think tried to escape. If you’re playing cooperatively, players win if there are no more available criminals and less than four have successfully escaped. In the competitive version, the game ends when every criminal has been put in jail or if four criminals successfully escape. Whoever guessed the most correct escapees along the way wins.

Deduction games were some of my favorite things to play as a kid. Whether it was because I had a childhood fascination with Sherlock Holmes or because I fashioned myself a young mystery writer, nothing was more satisfying than opening that envelope at the end of Clue and seeing that the cards matched your guesses.

As my gaming palate has become more sophisticated, modern games like The Search for Planet X and Chronicles of Crime are in a regular playing rotation since I acquired them and even older deduction games like the better versions of Clue (The Great Museum Caper and the strange but fun Clue VCR Mystery Game) still find their way into my gaming schedule.

Inspector Mouse: The Great Escape is about as simple a deduction game as you can imagine. For adults, there’s almost no game here since the strategy boils down to remembering only a few characters at a time. But for kids? This is a fantastic entry-level deduction game, with a fun and engaging alarm mechanic. Remembering the characters that have entered the jail is tricky for younger kids, but they can utilize simple strategies to aid their memories when the die allows them to choose the direction that the prison spins. (When working cooperatively you want to keep things running in the same direction, but in a competitive game, it’s better to confuse your opponents so they don’t know where the characters end up.)

The artwork for the criminals is good and every character is distinct enough to differentiate them, but similar enough in some cases to make picking them out challenging. (My family already has nicknames for every character—bug guy, slime guy, ice cream lady, lizard queen, etc…) While the bell piece and prison boards are the highlights, the components for the game are exceptional overall, with the lone disappointment being that the individual suspect sheets are flimsy folded pieces of paper. Like all games geared toward children, I’m not sure how this would play without kids present, but there is a genuine excitement when everyone at the table leans in closely while the prison is being turned and that alarm bell goes off.

There’s no doubt that Inspector Mouse: The Great Escape was designed to serve as a deduction entry point for gamers and in that way it excels. The construction of the game board is fun and visually it looks neat when it’s set up on the table. Even though my success rate on catching criminals is far below perfect, there isn’t much game here for adults. (Somehow, I’m actually the second-best player in my house. The six-year-old is shockingly good at this type of memory gymnastics.)

The largest issue Inspector Mouse: The Great Escape has is that I’m not sure it has longevity beyond a certain age range. As I said, my six-year-old had a lot of fun and said she “loved” the game, but she was also very good at it already. The four-year-old kid struggled mightily, so it could be that this game has a limited time frame when it’ll playable for most children. Obviously, that remains to be seen in this house, but it might become too easy for kids who are seven or eight years old.

Misses:
• Might only be a viable deduction game until age eight or so