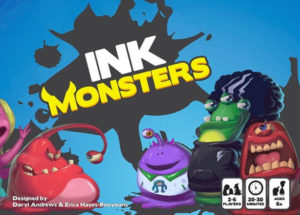 Monsters, Inc. has definitely registered itself in the minds of moviegoers as the default style for cute monsters. From the wackiness and cuddly factor of the creatures to the range of colors and appendage designs, the film’s style just ingrains itself into the minds of fans. That’s important because any game that implements that style can benefit from the film’s theme without actually being associated with it. Such is the case here.

Players in Ink Monsters are artists attempting to draw monsters with a magic pen. By combining monsters in certain sets, players can earn extra points. It’s a card drafting, set collection game for 2-6 players that takes about 20-30 minutes to play. It plays best with 3 or 4 players.

Ink Monsters is played over a series of rounds. Each round, a 12-card circular layout of monster cards is placed on the table with the pen card above one of the monsters. Every player also has a hand of 3 action cards.

Every turn, players may play an action card to manipulate the movement of the pen card and draw a replacement. Then, they MUST take the card located under the pen. Once they do this, the pen moves to the next monster.

Once the full circle of monsters has been taken, the round ends. After 3 rounds, players count their points from the monster cards. Some cards might give points by themselves, but many cards give additional points or negative points for having other monster types.

Once the setup of the game is complete, it’s easy to see the core design of this title owes its roots to a card game called Guillotine, designed in 1998. In this implementation, new cards have been added and the previous linear card row has been replaced with a circle of cards. These are solid, positive improvements to the game.

The turn structure is straightforward and easy to learn, especially important for younger gamers, which seems to be the target audience. There’s an innocent fun in taking cards of different monster types into your collection and figuring out the best way to score points.

However, the game does suffer from significant randomness. The cards in hand are players’ only avenues to manipulate the monster circle. So if a player doesn’t have the most optimal choices, they have to make do with what they have or what they draw. There is some strategy, but it’s always hindered by this tactical limitation.

The other problem is that the game does not use enough of the cards in the monster deck. Since some monsters depend on other monsters to score points, a certain strategy might be to collect monsters that gain points based on collecting others. Unfortunately, only about 75% of the monster cards are used in a game. Couple this with the randomness of the action cards, and there’s very little control of a strategy.

While Ink Monsters may be the perfect choice for younger gamers who aren’t looking for some advanced set collection, it’s a begrudging play from this reviewer. The theme is primarily a movie reference while the game structure is mostly an automatic move for the most points turn after turn.

Ink Monsters presents some new ideas to the previously released Guillotine. While the theme of the latter is more enjoyable, some of the mechanisms of Ink Monsters are better implemented. It’s an “ok” game for new gamers, but without the punch of theme, there is little more than cute monsters on cards and random card play. It’s a meh for this reviewer.

Final Score: 2.5 Stars – Even with some neat quirks to set collection, it doesn’t escape the trudge through randomness with every choice.