We review Imperial Settlers: Empires of the North – Roman Banners from Portal Games. This new expansion adds two playable clans to use in the game. We take both for a spin and let you know if they are worth adding to your collection. 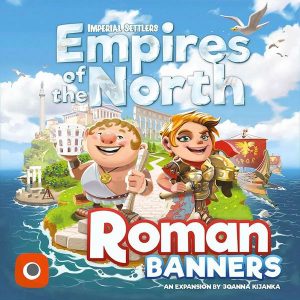 Last year, Imperial Settlers: Empires of the North blasted onto the scene with not only an excellent core game, but also a solid expansion (Japanese Islands) to up the variety of the game. Not even halfway through 2020, we have already seen the release of the newest expansion for the title, Roman Banners. If you’ve picked up an expansion from Portal Games before, you already know a little about what you are getting yourself into. So, let’s get to it.

Much like the Japanese Islands expansion, Roman Banners includes two new playable clans—the Flavian and the Trajana—as well as 6 more islands to conquer and pillage. Not much else to say on the contents, so let’s dive into the details.

The lower-rated complexity faction is the Trajana (although I’ve found Portals complexity scale to be fairly suspect, so take that with a grain of salt), who focuses on resources and sets. Many of their cards have building requirements based around how many types of cards you have in your empire. For example, the Pacus Formation card has a build cost of stone equal to the number of stone cards in your empire (include that card). So, cards like this are cheaper to get out early in the game. Conversely, some of their cards will provide bonuses based on how many you have of a specific type, meaning the longer you wait, the better. For Example, Souvenirs lets you spend 1 stone for every stone building your empire, earning you a VP for each stone spent (with no limit).

I found myself using the Construct action on the pawn wheel much more often with this clan to get around their higher build costs late in the game. The Trajana’s also has some solid field upgrades, so even if you don’t want to use the Construct tile, you should still have plenty of resources to do what you want to do.

The other clan is the Flavians. Their main focus is on getting foundations into play. There are two different types, cyclops, and phalanxes, but they don’t actually seem to be different from each other at all. They could very well have just been called Foundation A and Foundation B. Regardless, many of their buildings will require a specific number of these card types to be in play to build it. If you don’t have enough, you can use your foundations, which are essentially just face down cards bearing the matching icons. The only difference between those and a card in play is that once a foundation is used as a requirement, it’s’ discarded.

Interestingly, the Flavians are also fairly resource light. They have a wood forest and a stone quarry, but their third starting field produces foundations. I was able to handle dealing with these limited resources by relying on the clan’s Sculptor card, which lets you trade a stone for a VP or a gold. That and using axes from the Legions cards to conquer islands that would help produce what I needed.

When playing the Flavians, also expect to churn through your deck at a decent clip. One thing I really liked was that since the foundations are on the back of the card, you always know wants coming next. Sometimes I would do the Discover action if I were trying to push a certain type of foundation to the top of the deck.

Sometimes it’s hard to review an expansion for a game, especially when it’s not the first one released. Titles like these are the hardest because this review could have really been about two sentences long. Do you like Empires of the North? Then here is more variety for what you love. Unless a designer has gone really off the rails, then people usually know what they are in for.

And that’s the case with Roman Banners. If you enjoy Empires of the North, this is an easy buy. It’s Portal Games doing what Portal Games does best: giving us more content for games we love that go beyond being a simple reskin.

Hits:
• 2 new unique clans to play
• More island cards to up the variety
• Each clan feels fresh without a steep learning curve