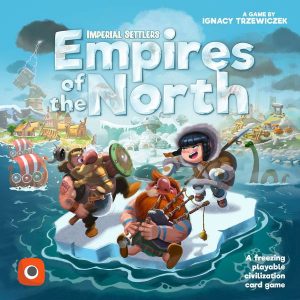 Imperial Settlers was released to great fanfare at Gen Con 2014, selling out in the first hour. It went on to win numerous awards and easily would make my top 10 favorite board games. This year, game designer Ignacy Trzewiczek brought us the next evolution of this engine building game, Imperial Settlers: Empires of the North. This is not an expansion or a reskin, but a completely new game set in the Imperial Settlers world. So let’s take a look and see if gamers should make some room in their collection for this one.

In Empires of the North, each player will take control of one of 6 different clans. The game is played over a series of rounds, each of which has four phases:

Lookout phase: Each player draws 4 cards from their clan deck and players must spend a worker for each card they wish to keep.

Action phase: One at a time, each player takes an action. Players can:

Once a player doesn’t want to take any more actions, they pass. After all players have passed, play moves on to the next phase.

Expedition phases: Players’ ships from their sailing actions are resolved in the order they were placed. Sailing lets players pillage or conquer islands. Pillaging will grant a one time resources and victory points while conquering (requires an axe) will add the island to the players empire giving them a new action they can now use.

Finally, the round ends with a cleanup phase. Rounds are repeated in this manner until one player gains their 25th victory point. At that point, the round is finished and players total up their victory points. The player with the most points is the winner.

One of the reasons is the lack of a common deck. Players in Empires of the North will rely solely on their clan cards and conquered islands to populate their empire. This allows players to laser-focus their strategies and build to the strengths of their empire. No more trying to figure out how to shoehorn a random common building into your empire.

And speaking of the clans, the game comes with six different clans and each one of them really does play differently. For example, the Ulaf is good at conquering and razing islands, while the Nanurjuk has a lot of cards with building bonuses and ways to cycle them in and out of their empire. I think these are a nice step up from the civs in Imperial Settlers that had different cards, but didn’t feel all that diverse (until you got to the expansions).

The one downside of the clan decks is that some cards can feel more vital than others in your deck. If the cards you are wanting are at the bottom of the deck, there usually isn’t much way to dig them out. While there are many ways to draw cards, and you should make your way through most of your deck, more than once we’ve drawn a card and said: “that would have been useful 4 rounds ago.”

I’ve also found Empires of the North to be fairly friendly to new players of the genre. There is no deck construction anymore and without common cards, every card that comes into a players hand will be useful in some way. More importantly, Razing, found in both Imperial Settlers and 51st State, is much tamer now. It simply exhausts a card for the round of your opponent. The downside for players more interested in conflict, razing doesn’t feel very worthwhile. In all the games we’ve played, I’ve only seen it used a couple of times as that axe is usually better spent conquering an island. That being said, I did use it on a linchpin card of an opponent that stopped him from winning the game that round. So it has its uses.

I’ve talked about sailing some and I was a big fan of this mechanic. As four cards are available at the start of the round to either conquer or pillage, players can see what is available and decide if one really fits into their strategy. If one does, you can try to rush the sailing action to make sure you get it. This was an interesting way to make sure players still get some variety in their empires without being forced by the luck of the draw.

Finally, the new action wheel helped give players a lot of flexibility. This wheel, which gives two free uses per round and two more by spending apples, allows players to fill holes in their empire. For example, if you need to hunt for a card, you can go exploring at least twice a round. Low on resources? Harvest (I should also note that you get to keep resources between rounds, which makes more thematic sense to me). And its variable setup helps give the game a bit of replay value as the action positions will change from game to game.

Imperial Settlers: Empires of the North has been thoroughly enjoyed by everyone who has played it at my gaming table. I was a little unsure at first whether there was room in my collection for both (I still love Imperial Settlers and it isn’t going anywhere), but I think there is.

Empires of the North boast some excellent production values, has some solid replay value, and even has a solo game mode for those who are interested in that. I’m interested to see what expansion clans Portal Games comes up with, as I love the uniqueness of each one so far. Whether or not you were a fan of the original Imperial Settlers, I think Empires of the North is definitely worth a look. It’s streamlined, friendlier to new players player, and will provide a lot of gaming entertainment for its price point.

Final Score: 4.5 Stars – The next evolution of Imperial Settlers brings us a great engine building game with a lot of variety between the different clans.

Misses:
• Razing is a lot less impactful
• Rulebook could be better