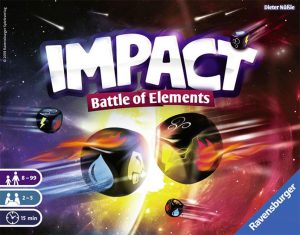 Back in 2012, an unassuming little game hit the French market called Strike!. This mindless dice chucker was probably one of the most silly and addictive games I had played in a while. The rules were incredibly simple and the game lacked any kind of depth… yet we played it endlessly.

For years, fans have been clamoring for publisher Ravensburger to bring this to the US. The only way to get a copy was to import a version from Europe. Well, fret no more, because Ravensburger has released Impact: Battle of the Elements, a reimagining of Strike! Will this new version satisfy our craving for mindless dice throwing or will we continue to import the foreign version. Let’s find out.

Impact: Battle of the Elements (Impact) is a Dice Rolling and Player Eliminating game for 2-5 players. Impact plays best with 4-5 players.

The core game of Impact is simple. Each player starts with a number of six-sided dice. Five of the six sides of a die shows a unique element, with the sixth side being blank.

On a player’s turn, they throw one of their dice into the arena. Any dice showing the blank symbol, are immediately removed. If any of the dice in the area match a symbol, they are collected and the player’s turn is over. If none of the dice show a matching symbol, then the player can choose to press their luck and throw another die, or pass their turn.

If a player runs out of dice to throw, they are eliminated. Last player left in the game wins.

I’m not going to spend too much time comparing Impact to its predecessor, however, I will say that the rules are almost identical (other than some variants we’ll touch on in a minute). I can easily say that if you own Strike, then don’t feel any need to get Impact. However, if you don’t own either, Strike! is still the one to get. While the dice are better in Impact (symbols instead of numbers), the arena in Impact is much, much worse. It’s about half the size and has steeper walls. This can cause less dice to fly out of the area (always fun to watch someone screw up like that), but the bigger issue is that it’s a lot harder to see the dice. Frankly, I’m not sure why they screwed up the greatness that was the Strike arena, but I’ve tossed my Impact arena in the trash and just put my Impact dice in with Strike. Now that that’s out-of-the-way…

Impact (and Strike! before it) is one of those games that’s better experienced than reading about. Reading the above rules, I’m sure most readers are thinking “That’s it?”. And you’d be right. That’s all there is to it. Yet the core game of Impact is incredibly addictive. Chucking those dice into the arena is very satisfying. If you are feeling adventurous, you can try to do trick shots by banking the dice off the wall or smashing them into other dice. Or you can just casually flip dice into the arena and hope for the best.

And that’s where Impact shines. It’s a mindless filler game that’s the epitome of “one more round” type of games. It has the ability to keep players attention on the game even when it’s not their turn because rounds move so fast. Throw, throw, done. And then you get the crazy moments, such as when all the dice in the arena match each other. You get to cackle with glee while you scoop up all the dice and force the next player to throw their entire pile of dice into the arena at once.

For players that want a little more variety, there are the symbol variants. Basically, whatever symbol is showing on the start die becomes the “activated” symbol for the game. When a pair matching that symbols happens during the game, its power is activated. For example, if the symbol is lightning, then when a match is rolled, all players have to throw one die into the arena and the active player collects any matches. Or for Air, when an air match is made, all players pass their reserve of dice to the player on their left.

Overall the variant symbols are fairly hit or miss. They do work well to shake up the game, but the also add another bit of luck to a game already overflowing with it. Usually, we just stick with the base game, but it’s a nice variant for when we’re in the mood.

Frankly, Impact: Battle of the Elements is a hard game to judge. Had I never played Strike!, I would have loved it more than I did. To me, it felt like a shrunk down version of a game I already love. The new dice and variant powers are nice, but I despise the new arena. Yet the core gameplay is still there and it’s as fun as ever. If you are able, grab a copy of Strike!. If not, Impact: Battle of the Elements is a suitable fill in, and probably works even better as a travel version due to its smaller footprint.

Final Score: 3.5 stars – While I would have much preferred a straight up localized version of Strike, it’s a suitable fill in for those not looking to import.

Hits:
• Addictive gameplay
• Perfect for a filler game
• Accessible to just about anyone.

Misses:
• Arena is a clear downgrade over its predecessor
• Variant powers are hit or miss.