We review Immersive Battle Maps, an excellent set of 30 detailed fantasy battle mats with a lay flat binding and dry erase finish that any tabletop roleplayer would love to have in their collection. 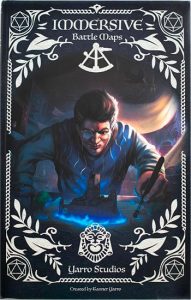 When I started roleplaying, my group mainly used graph paper to map out our adventures and would then only use figures during tactical situations and measure things with a tape measure. Not the most fun way to game but that’s what we had. It wasn’t until about college for me when my group moved to using dry or wet erase maps for combat. But these were blank grids where the Game Master had to fill in all the detail which created lots of downtime.

Gaming has finally evolved and now pre-printed maps are finally available, yet still somewhat limited. That brings us to today’s review of Yarro Studio’s Immersive Battle Maps. Does Immersive Battle Maps give your fantasy roleplaying combat the detail and variety it has so desperately needed? Read on!

Immersive Battle Maps is on the large side measuring 11” x 17” and once opened, the actual map’s widths double to 22”. In total it includes 30 maps ranging from a farm, forge, inn, sea, and lava fields to name a few.

The book has a lay-flat binding so minis can be placed directly onto the maps without having to weigh the edges down. Each map has a dry erase finish and each also includes preprinted 1” grid over the entire map. Most of the maps include details to the map type like tables, chairs, doors, etc but a few have minimal detail to further customize as the Game Master would like.

When you first get your hands on Immersive Battle Maps, it’s hard not to be impressed. Especially, when you first open it. If you’re a Game Master or even a player, then you’ll find your mind exploding with ideas of how and when to use this collection of maps. There’s a ton of variety and the maps do not duplicate so each is original and easily customizable with dry erase.

There might be some maps that you will likely use more than others, but included is a great amount of variety and replay with this book. There are a few maps with a simple forest and dungeon grid for you to customize and I honestly think that’s a great addition because even given all the detailed maps there are times when you do just need to make it your own.

I think the thing that surprised me the most when using Immersive Battle Maps is that it actually lays flat without much effort. Occasionally, you do need to play with the binding or weigh down a corner but for the most part, there’s not much effort needed aside from opening to the map you want to use. It also seems the more you use it the less you need to fiddle with the maps.

The thing I absolutely love is that there are enough maps included that you don’t have to wait for the Game Master to draw out all the necessary details. For the most part, they may add some more detail but gone are the sessions waiting for 10-20 minutes for the GM to draw out a room, corridor, or building.

Now, I was a bit sad to see on the Kickstarter page and yarrostudios.com site that static stickers are available to add more customization and detail to the maps but my review copy did not include those. So, I cannot comment on them fully. But I will be honest, I would love to have those because they look like excellent add-ons and they’re reusable.

My only issue with Immersive Battle Maps is that I wanted to interact at times with multiple maps but you’re not able to do that with the lay-flat binding since all are connected to the book’s spine. If the binding were a three-ring design, where you could pop them out and lay them out as you wish then you can interact with multiple maps. An open binding type would give users the most bang for their buck, but with those binding types, you do run the risk of losing materials or damaging it easier.

Overall, Immersive Battle Maps is very impressive with the variety of maps included and the amount of detail of each map. There are also maps included that have less detail and allow for more customization, but it all means less downtime waiting for the Game Master to draw and more time to game.

The lay-flat binding works as advertised but an open binding would give users the ability to interact with different maps instead of buying a second book.

Final Score: 4.5 Stars – an excellent detailed set of 30 maps that any tabletop roleplayer would love to have in their collection.

Misses:
• Binding does not allow maps to be removed