We review Honga, a family weight euro game published by HABA games. In Honga, players are trying to earn the most points by collecting resources and taking actions in the field. 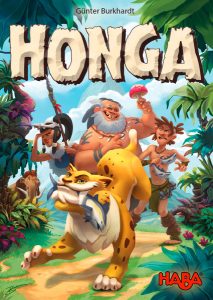 HABA Games has long been known for their children’s games. In the past few years, they’ve expanded their family-weight offerings with games that serve as a springboard from their yellow-boxed offerings for young children into the deep dark world of hobby gaming.

Today we are taking a closer look at Honga, a resource management game where you’ll have to make sure to pet the neighborhood cat sufficiently, among other things. It plays very much like a rules-light euro game and just might be an intermediate step you need before you try to teach your children how to play Castles of Burgundy.

In Honga, you’ll spend each turn playing your action disc on one of four locations. Each location is at the intersection of four different actions (of 8 total). And the power of the action you take depends on the number of paw prints on the quadrant of the associated action. Since each disc only has paw prints in some of the sections, you’ll need to choose carefully how to place and rotate it so that you can perform the right actions each turn.

The actions themselves are pretty straightforward. Four of them simply gather the games resources—fish, berries, mushrooms, and water that are tracked on incredibly well-produced dual-layer player boards. Those resources can be spent bartering with other clans, essentially just filling their orders in exchange for victory points.

Your actions can also be used to gather bonus cards, move up the temple, or attract a mammoth to your clan. While all of these have rewards of resources or victory points, if you have the most mammoths in the field you’ll also be awarded the mammoth tooth and draw from a special supply of more powerful action discs. The final action you can take it to pet Honga, the game’s namesake tiger. If you fail to pet Honga, he’ll come to steal some food from your tribe every turn and remain there until someone else ignores him.

The game ends once one player has reached a certain number of points (which changed based on player count). Play continues until all players have the same number of turns and then the player with the most points wins!

Clearly, HABA is known for their children’s games but have really broken into the family line in recent years. The success of Karuba and Adventure Land seems to really have spurred on their continued development of titles that work well for the whole family. And Honga certainly fits that bill.

For starters, the theme and production here are just fantastic. The player boards for resource tracking, chunky wooden mammoths, and Honga figures, and little cavepeople meeples for the temple track really make the game a pleasure to set up and play. The idea of having to pet the neighborhood cat every turn is certainly something your kids will be able to understand and make fun comments about throughout the game.

Mechanically, Honga my not be the most exciting action selection type of game you’ve ever played, but there is enough going on to keep the experienced gamers in the group engaged. You’ll have to decide between fulfilling the trading contracts or perhaps spending your early resources focused on mammoth taming so you can draw more powerful cards. Even ignoring Honga completely is a decision you have to consider. Taking food from you every turn is no small price to pay, but you’ll be free to continue to ignore him for the time being and use your precious actions elsewhere.

The biggest drawback for me has been that every play of Honga feels pretty similar. Even each turn within a game feels more or less like the turn before it. This isn’t the type of game even a family would likely be wanting to play multiple times in close succession or you’ll get burnt out pretty quick. But as a game to have available every now and then or to introduce some younger gamers to basically an entry-level euro game, this is a great option.

Honga isn’t the type of game you’d play with just your die-hard gaming group. But that isn’t the audience it is aiming for. I prefer to think of Honga as a great step for young children toward more eurogames that require a bit more strategic and tactical thinking. HABA’s age recommendation is 8-and-up, but even as young as 6 (with a bit of advice) we didn’t have any problems.

Final Score: 3.5 Stars – A thematic and engaging family weight game that will lead to a love of Feld-like euros in no time!

Misses:
• Replay value suffers a bit due to lightness and lack of variability.