We review Honey Buzz, an economic euro game published by Elf Creek Games. In Honey Buzz, players are trying to earn the most money by getting their bee business up and running. 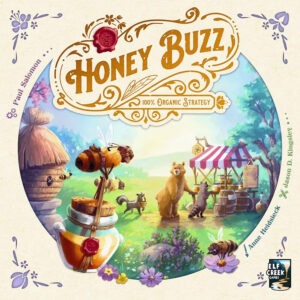 Did you know that honey bees are the only insect that produces food eaten by humans? They also pollinate over 80 percent of our cultivated crops. And in turn, we’ve decimated the honey bee population in the last 50 years. It seems like they’ve had enough.

The bees in Honey Buzz have realized they can cut out the humans and sell their honey directly to the bears and badgers of the forest for those sweet dollar bills that every bee’s dreams are made of. Hopefully, they can afford some good lobbyists to fight for environmental protection when it’s all said and done.

The gameplay in Honey Buzz revolves around your personal hive which you create from hexagonal tiles. Each tile has two hexagons and every player starts the game with the same tiles arranged in the same shape. There is also a field where different types of nectar are laid out in a grid. Each player has one bee token that can move around and collect nectar throughout the game.

Then you’ll take turns around the table either taking a tile or recalling your workers.

Most of the time you’ll be taking a tile. To do this, you’ll place your beeples (bee-shaped meeples, cute, right?) on one of the tile areas and take the matching tile. If another player has placed a beeple in that space you can still take that tile but most commit one more bee than the last player.  Each tile has one blank hex and one with an action on it. The actions include:

The trick to Honey Buzz is you don’t get to do the action when you take the tile. Instead, you must arrange tiles in a way that there is a completely enclosed empty hex in the middle. When you do so, you can take all of the actions adjacent to that empty cell in any order. These cells are vital to your production as it’s also the only way to collect nectar tokens as they have to have an enclosed empty cell to slot into.

Of course, when you don’t have any bees left to use, you must recall your workers. You also get to move your bee in the field one space if you’d like when you do this.

The game continues until the market for honey has bottomed out or enough orders have been fulfilled. Then the hive that has the most money is the winner.

Honey Buzz has a great table presence. Pastel-colored bees everywhere. Gummy-like pieces of honey. Cute woodland creatures adorn the board and many of the cards. You’d be forgiven for thinking you are about to play some light family game and not entering the dog-eat-dog world of bee economics. Maybe it should be a bee-sting-bee world? Either way, the point is this: things aren’t as nice and cute as you might expect. 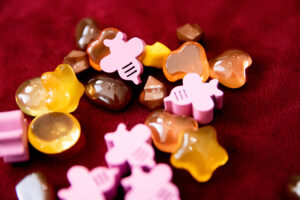 What there is though is a lot of strategy. And most of that comes from the interaction between your tiles and the actions you can take. The bulk of the game is centered around creating empty cells and filling them with nectar, but there is a lot to consider when doing so as the tiles you choose will dictate your actions later in the game.

First off, the pattern around the outside of the cell will change which game of nectar you can place there. Each tile is orange between the hexes and white on the ends. Acaia nectar requires the most white as part of the pattern and therefore requires the most tiles to complete. But it is the most valuable to begin the game. Wildflower is enclosed entirely around orange outlines so it can be completed with just three tiles. But it has the lowest value.

Of course, completing a cell isn’t just about what nectar you are getting but also taking the actions around the cell. Keeping in mine each 2-hex tile has the action on only one of the hexes and the other is blank. If you position the action-side adjacent to the empty cell, you’ll get to perform that action. But in doing so your future completed cells will offer fewer actions. So it’s important to have the right actions at the right time, not necessarily just having as many as possible.

And when you complete a cell with a bunch of actions… whoooooo wheeee! It’s a lot of fun to combo together four or five actions. Maybe not for everyone else at the table that has to sit around for 10 minutes while you figure out the optimized order to do everything. It can certainly slow the game down and even become a bit cumbersome as you try to remember which actions you’ve taken and exactly which ones you have left. I would have appreciated some tokens to cover up actions when you use them just as a helpful reminder (we eventually used coins).

One of my favorite things in Honey Buzz is the value of the order cards. Early in the game, it’s almost always more profitable to just sell directly to the market than it is to fill orders. But you can only sell one type of honey in each action so it can take more actions to do so. Of course, selling to the market means the future value is reduced. So at some point during the game orders will exceed the market in value. But, rather than just being a money consideration, completing an order also allows you to take a bonus action. Oftentimes you’ll fill an order even though selling directly could be more valuable in order to take the additional action. 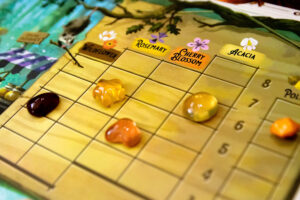 I do wish there was an option for some more volatility in the market board. The honey prices only go down and only when honey is sold there. And it only drops one space even if someone managed to sell five wildflower honeys all at once. Calling it a market is really giving it a bit more credit than it’s due as it’s more of a slowly declining price track. It works well enough, especially in conjunction with the order cards, but if you expect a lot of price changes, careful market timing, and manipulation you are buzzing up the wrong tree.

There are also three public goals revealed during setup that may point you in one direction or another. These could be things like bonuses for filling orders or having a certain type of nectar. Each game will play out a little bit differently as the overall goals and steer things in a bit of a different direction. But the broad strokes of what you are doing is changed more by the layout of your hive and your opponent’s actions than the goals.

Honey Buzz is a solid medium weight euro game covered in beautiful pastel colors, cartoon animals, and sticky honey. It’s not heavy by any means and makes good use of a spatial puzzle as a means of selecting the actions you are going to take. There’s a lot to consider with each tile placement and that can be both rewarding and frustrating depending on the outcomes.

I do wish there was more variety in ways to score points. The market and orders are well balanced and give you interesting decisions between them. But the games do boil down to producing and selling as quickly as possible. The end game goals help in giving you some direction on which types of honey to try to get to before the other hives snatch it all up.

Final Score: 3.5 Stars – Well produced euro game with an unexpectedly important spatial puzzle. The delayed gratification of triggering actions later is interesting, even if it leads to some longer turns throughout the game.

Misses:
• Market slowly reduces over time and isn’t particularly interesting
• Turns can take a while and become painful to sort out when you have a lot of actions.