We review Hero's Crossing, a dice drafting and tile laying board game published by One Method Monkey. In Hero's Crossing, players are trying to run the best town and shop to attract adventurers and earn money. 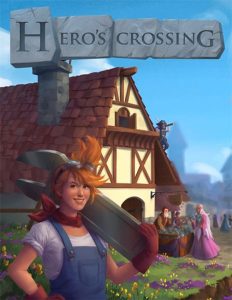 “Monsters and Madmen are everywhere. Glory awaits the stalwart heroes who would stand against the forces of evil.
You are not one of those heroes.”

Every hero is only as good as their gear. That’s where you come in. In Hero’s Crossing, you’ll make and sell goods to assist stalwart adventurers on their quests. Can you help save the world by balancing fantastic products with competitive prices?

Hero’s Crossing is a tile laying, dice drafting game for 1 to 4 players by One Method Monkey. It plays best with 4 players.

The object of Hero’s Crossing is to be the best shopkeeper. A player does this by improving their town and stores to attract customers.

The first round begins with a tile draft. Each player starts with four building tiles and 2 land tiles. Players draft building tiles, then use the tiles to form their town, using the land to separate the buildings (buildings cannot be next to each other).

At the start of each round, the first player rolls the zoning restriction die, which indicates the direction in which players can expand your town that round. The first player also draws and reveals an action card, determining the available actions for the round.

On a turn the player starts by rolling their dice (resources). Then they’ll select die and an action pair to take. Available actions include:

As free actions, players can also steal dice from their opponents by trading their own dice or trade four resources in for a victory point.

After the actions phase, those who chose to attract heroes will have the opportunity to sell resources to heroes. Players who bid on buildings can add them to their town.

Heroes and buildings are reset, dice and workers are collected, and first player passes.

End game is triggered when there are no more heroes in the draw deck (2 more rounds of play), or all heroes have had their needs filled (play ends immediately). Final victory points are tallied and the player with the most is the winner.

Most of us have played the hero of the story, the adventurer headed off to their noble quest. And goodness knows every D&D or Diablo quests ends with heading to the shop to buy gear for the next one. Flipping this trope on its head to make YOU the shopkeeper is fun and fresh.

The game art is perfect. In true JRPG fashion, you start out with buildings and heroes that are 8 bit characters, and upgrade them to 16 and 32 bit. Even your worker meeples are pixilated. The box art misses the mark – given that this game’s roots are in nostalgia for a certain type of game style, they should have doubled down on the old school style.

Building your town, producing, and selling have enough moving parts to keep the game momentum up. I never felt like I was marking time until a sell phase, or that I was just performing the same actions over and over. For players that like town building, this hits the mark.

I’m not keen on the dice stealing. The rulebook mentions that it’s an integral part of the game, but if feels a little cheap to be able to essentially use any die on the table. At that point, why not just create a communal pool?

The rulebook itself is very clear in its directions, walking the player step by step through setup and a turn while also having sections to explain actions in more detail. There’s also a link to a video tutorial.

While there is a solo variant, I’m not sure it works. It’s more a lot of “instead of X do Y” instructions based on standard play, and employs a dummy player. This probably won’t be anyone’s new favorite single player game and probably wasn’t necessary.

Hero’s Crossing is a cute drafting and economic building game that turns the ‘player as the hero’ trope on its head. Fans of JRPGs will love the art style, but players that are more into hack and slash may find this a little slow. Hero’s Crossing has a solid rulebook supports new players. Dice drafting mechanics are a little wonky.

Final Score: 3.5 Stars – Old school video gamers will appreciate this taking on adventuring while new players will have no trouble joining in on the fun as well. Solo Mode leaves a lot to be desired

Misses:
• Dice stealing in a drafting game seems to miss the point.
• Advertised solo-mode has flaws