We review Heroes Welcome, a set collection board game published by Pencil First Games. In Heroes Welcome, players are trying to earn the most points by servicing adventurers coming to town. 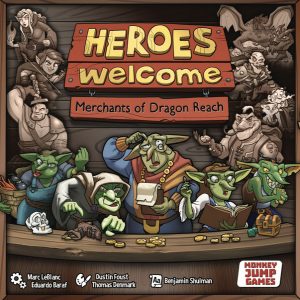 It is a trope as old as fantasy gaming: heroes burst into a dungeon, slay all the monsters, steal their gear, sell it or trade it for new goodies, then move on to the next town. This has always led me to more questions that could be the origin of an epic RPG campaign. What happens to the treasure after it gets sold? Where did the monsters get the shiny weapons in the first place? Just who are these “heroes” anyway?

Heroes Welcome attempts a light-hearted approach to answering these questions, with players taking on the role of goblin merchants buying from heroes and selling to the (doomed) monsters. Does Heroes Welcome level up?

Heroes Welcome is a set collection game for 2-5 players that plays in about 60-90 minutes. We recommend 3-4 players for the best game experience.

Heroes Welcome is played over a series of turns, with each turn divided into two phases, the Town Phase, and the Dungeon Phase.

In the Town Phase, players use actions given to them by Shops, allowing them to trade with three different adventurers. Some shops allow players to pay adventurers gold for their treasures, while others allow them to trade treasures directly. Shops differ in their target and amount of trade possible; some provide trading with any adventurer, while some require a specific target, and the limits vary from one-time to infinite use. After a player uses a shop, it is closed for the rest of the round. Players must move the adventurer token around the town as they progress, with shop selection on their turn limited to open shops adjacent to the token on their turn.

In addition, players can use Guild Halls, which are available to a player no matter where in town the adventurer token is. These provide options like gaining gold, trading with the black market, drawing Scam cards that can be played on their turn for bonuses and effects, or building new shops in town. Like shops, once they are used, they are closed for the rest of the round.

Finally, players can fulfill orders for monsters by crafting weapons and artifacts for them. Each monster has a specific requirement of what treasure needs to be spent to construct their order, awarding players victory points and gold when completed. Players can spend additional treasures to add extra abilities and value to their crafting, which provides bonus points. These monsters, now armed with their goods, can head off to the dungeon to fight the adventurers.

During the Dungeon Phase, the monsters are slain by the adventurers, allowing them to level up. The adventurers gain a number of new treasures equal to their level and new monster customers are revealed. All the shops and guild halls are reset and opened, and a new Town Phase begins, with the heroes’ sacks filled with the treasure and booty from their latest delve, ready to wheel and deal with the player merchants.

Play continues until all the monsters, including the dungeon boss, have had their orders fulfilled; the player with the highest number of victory points is declared the winner!

With the promise of a refreshing and clever twist on a fantasy theme, it was a pleasant surprise to find that the mechanics and gameplay of Heroes Welcome integrate and support that theme successfully. We never found ourselves thinking in terms of collecting sets or exchanging bits, but rather engaged and immersed in the theme. In a world where game themes are tacked on to a convenient mechanic, Heroes Welcome stands out as a title that is dripping with theme.

The action selection mechanic in the Town Phase was an aspect that we found especially interesting. Moving the adventurers to give yourself access to shops, while simultaneously trying to deny that access to your opponents, added some brain-burning to what could be a run-of-the-mill game. Many times, players found their upcoming plans foiled by having the adventurers move to a disadvantageous position for them. The one thing we would have liked was a smaller adventurer token, as we found it got in the way of seeing the game board quite often.

A concern we faced was the immense advantage that appeared to be granted to the player who went first in the round. Since they were the first to act right after the heroes had just collected a whole slew of treasure, that player had a clear advantage over the rest in that round. While ostensibly, this balances out over the course of the game since the first player rotates, but it was hard to shake the impression that going later in the round put players in a position of weakness.

In our plays, we found that Heroes Welcome requires players to do a little bit of everything, instead of focusing on a specific strategy. In one session, a player decided to ignore collecting Scam cards and the powers they grant, much to that player’s detriment. The same goes for not using the guild halls to their maximum potential–being able to have a balanced approach to game strategy seemed to provide the most success, which might not bode well for player interest on replays.

The theme is presented in a very light-hearted manner, including some humorous names for treasures that are a cavalcade of geek callouts, and the rules are equally as light. With a brief rules overview, some helpful player aids, and one round of run-through, we found ourselves playing as if we had known the game for years. We always appreciate a game that has strategic depth but straightforward rules and give kudos to Heroes Welcome for providing that experience.

Heroes Welcome combines a fun theme, familiar game mechanics, and a solid design into an enjoyable title that is good for any group of gamers. If you’re looking for a game on the light end of the spectrum, but still with some strategic meat on the bone, we would recommend you give Heroes Welcome a spin.

Final Score: 4 Stars – Light, fun and enjoyable. Worth checking out.

Misses:
• The first player has a tremendous advantage in the town phase.
• Variation in strategies seem limited
• Component scale can cause issues during gameplay