We review the two player board game Heir to the Pharaoh by Eagle-Gryphon games. In this auction and set collection game, players are trying to earn victory points to be the player who takes control of Egypt. 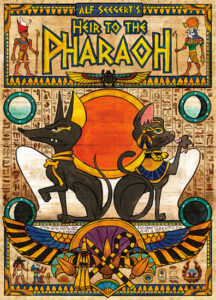 I’ve never been a huge fan of Egypt as a theme. While the pyramids are cool to look at, I’ve just never been drawn to Egyptian culture. Now I say that fully realizing that I own quite a few Egyptian-themed games in my collection (RA, Egizia, Cleopatra and the Society of Architects to name a few). So apparently as much as I don’t love the theme, they still tend to find their way to my gaming table. So who knows, maybe I subconsciously love all things Egyptian.

Today, we are going to take a look at the newest Egyptian-themed addition to my tabletop, Heir to the Pharaoh. Designed by Alf Seegert and published by Eagle-Gryphon Games, Heir to the Pharaoh puts two players in a battle for the right to succeed Pharaoh in ruling the kingdom.

Heir to the Pharaoh is a 2 player bidding and set collection game that takes about 45 minutes to play.

In Heir to the Pharaoh, one player will take on the role of the god Bast, while the other controls Anubis as they vie to take control of Egypt. Each round, players will be bidding to use the power of the gods to grant them special powers. These powers will let them build monuments, the pyramid and use animal magic in their quest for domination. Once the sun has made a full revolution around the board, the player with the most points will inherit Egypt and all its glory.

The components in Heir to the Pharaoh have their highs and lows. Every component, from the cards to the game board, is decked out in thematic, period appropriate illustrations. Whether that’s good or bad depends on your love of Egyptian culture. While it doesn’t appeal to me personally, I can recognize that it fits the theme of the game well, so no complaints here.

The monuments and pyramid are made out of cardboard, with stands for the monuments. However if you end up enjoying Heir to the Pharaoh, I’d highly recommend picking up the token expansion pack on the Eagle-Gryphon website. From the pictures alone, it looks like it would vastly improve the components of the game, going from cardboard standees to wooden tokens.

Finally, I must say I love the way the insert of the game is designed. It includes a tray that fits all the pieces, and even a plastic lid to cover it. I normally bag all my components because my games are stored vertically. This wasn’t an issue with Heir to the Pharaoh and I wish more game publishers would follow suit.

While the game play in Heir to the Pharaoh isn’t complex, it will probably take players a few rounds to really wrap their head around all that there is to do.

Each player starts the game with an identical animal magic deck and a hand of bidding cards, numbered 1-10. Once the rest of the tokens and cards are setup, you’re ready to begin play.

Each round is divided into two phases:

Bidding Phase:
The 7 god cards are revealed one at a time and bid upon. The first card revealed each round becomes “Pharaoh’s Favorite” and receives a bonus power for the round.

Players may use an animal magic card before bids are revealed, these allow a player to break the rules in some manner. To bid, each player selects a bidding card and places it face down. When ready, cards are revealed and the higher bidding player takes the card.

This is repeated for the first 6 god cards, except Pharaoh who works a little differently. The 7th god, Thoth, is not bid upon but immediately awarded to the player who won the least amount of bids that round.

Action Phase:
Each god has a number value, and they are resolved in that order from 1-7. The player who won the auction for that god gets to take the action.

1: Seshat – Take the active monument and token, and place it on the board.
2: Geb and Nut – Claim and rotate the monument. Points are scored at the end of the game for controlling monuments.
3: Ptah – Take the matching monument card. Points are scored immediately based on how many of that monument card you have.
4: Ra – Place a player disc in the spot currently occupied by the sun token. One point is scored immediately, and points are also scored at the end of the game for your longest chain of discs.
5: Wadjet – Draw an animal magic card.
6: Pharaoh – During the bidding phase, instead of bidding normally, players place a secret bidding card near the pyramid. Every other round, these cards are resolved. The player who’s bidding total is the highest, gets to place and claim the next level of the pyramid. Points are scored immediately for the level and at the end of the game for controlling the pyramid.
7: Thoth – This is a cleanup/reset phase. The player chooses the new monument for the following round. Also, all cards used to bid with this round are given to your opponent.

Rounds will go by in this manner until the sun token has made it all the way around the board (8 rounds). After that, the game ends and end game points are awarded. The player with the most points is the winner.

Overall, bidding games can be really hard on new players. The problem lies in the fact that players need to be able to judge the overall value of the item that they are bidding on. This becomes an even larger issue in games that are currency based. It can be easy for a player to cripple themselves early by over paying on a card that they can’t use.

Heir to the Pharaoh ended up creating a solution that solved a few issues I have with auction games. In regards to the above issue, players are only using a closed set of bidding cards, so that never really comes into play. Even if they overbid early, they will almost always get that bidding card back.

The second thing Heir to the Pharaoh does is that it’s created an auction game that actually works well with two players. Usually, auction games fall flat with only two, because once a player has bid and collected their card, the other player just pays the minimum for the second card. It ends up being fairly anti-climatic.

But I do really like how the auction is handled here. Especially, that you have to give the cards you used for bidding in a round to your opponent. This creates a nice balance in the game that gives it a bit of an ebb and flow. More than once I’ve tanked a round to feed my opponent 1 and 2 value bidding cards, setting them up for a dismal future round.

Another good thing about Heir to the Pharaoh is that there are many paths to victory. Most all of the god card give you a benefit in some way, with half of them providing scoring opportunities. From set collection to token placement, there are a lot of ways you can earn points.

However, with that open approach there is a downside. Heir to the Pharaoh can be a bit of a pain to teach. Not that it’s a complex game, it’s just that there is a lot to remember. Each god card works in a different way, and the game is lacking a player aid. Usually when a new god card is revealed, I had to either look up, or remind my opponent what it did. After a few rounds/games this becomes bit more intuitive, however the learning curve is definitely there.

The other issue I had with Heir to the Pharaoh is that I think that they game could have used a tad more variety. While the animal magic cards were a great touch, they only affected the bidding phase. So once you got to the action phase, all 8 rounds played out pretty similar.

This further affects the game experience when you get a down round. There will be some rounds where you will lose almost every auction. When that happens, there really isn’t much to do other than watch your opponent play.

Overall Heir to the Pharaoh does a lot of things right, most notably having an excellent auction mechanic that works perfectly with two players. Swapping the cards used for bidding with your opponent created a lot of fun strategies that players could experiment with. It also helped to balance out the game play and ensure one player couldn’t dominate an auction for long.

Once you get over the learning curve, Heir to the Pharaoh can be a fairly strategic game that really sets itself apart from other games in the genre. While not perfect, I still had a good amount of fun playing the game. Perhaps an expansion down the line could add a bit of variety to the game to help keep the later rounds fresh.

If you’d like to pick up a copy of Heir to the Pharaoh, you can get it for about $50.

Misses:
• Could use a bit more variety
• Not much to do when you lose most auctions.