We review Hedgehog Hop, a 2 player card game published by Fight in a Box. In Hedgehog Hop, players are trying to earn the most points by playing dancers to the dance mob and trying to find ones in sync. 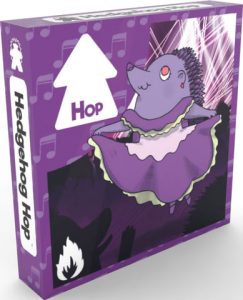 When rating your dance crew auditions, I think everyone knows that Jason Mendoza’s 13 point scale (with an 8 being the highest) is the way to go. Now the real question is where would a hedgehog fall on that scale? Rergadless, when forming a dance mob with hedgehogs, they need help getting in sync, and that’s where you come in.

Still with me? Awesome. That’s the somewhat goofy theme of Hedgehog Hop, designed by Seppy Yoon and published by Fight in a Box. So strap on your dancin’ shoes as we take a look at this small box game.

Games of Hedgehog Hop start with 9 cards laid out in a 3×3 grid forming the dance mob. Each player gets a hand of 7 cards and must play one of them each round. Every card has three parts:

When you play a card, it slides into the dance mob in the direction of the arrow on the card, pushing all the cards in a line that direction. Afterward, you score one backup dancer for each optionally adjacent card to the one you played that shares both the move and either color or style. On future turns, you are allowed to play one of your backup dancers in place of the card from your hand.

Turns alternate in this manner until each player has one card left in their hand, which becomes their lead dancer. Final scoring is based on the largest group of dancers in the mob that share the move, style, and color (scored separately) with your lead dancer, and also 1 point per backup dancer. Most points wins.

It’s probably fair to say that I had low expectations for Hedgehog Hop. When this tiny 3″ square box landed in my review pile, I promptly put it off for quite a while. With respect to artist Mark Eberhardt, the colorful and cartoony art really isn’t my style and didn’t do much to draw me in. Yet behind these goofy looking animals and small presentation is a surprisingly thinky game.

Hedgehog Hop ended not being the throwaway title I was expecting, but a well thought out game with some really solid mechanics. Players start out with 7 cards in their hand, so early decisions will probably be fairly easy. Play the card that gets you the most points. But what you also want to do is set up yourself for future cards. If you have a few dancers with the same move in your hand, it’s great if you can play them in sequence and manipulate the grid so that they are able to score off each other.

And about halfway through the game, you need to start thinking about your end game strategy. Since your lead dancer scores off all three of its traits, you need to start calculating which hedgehog you want to reserve for that final scoring. If you see a large mob of red cards forming, you definitely want to hold on to that last red card in your hand.

One issue that did crop up during testing was that if you get a hand of all the same type of moves, it really limits your options. Having to slide animals from the same direction constantly makes for a boring game and really limits your strategic options. Thankfully you can play from your backup dancer (at the expense of a point though), which was some nice luck mitigation from the designer.

The other issue that came up is that the player sitting on the opposite side of the dance mob will most likely have to hold their cards upside down. Otherwise, they’ll be doing some mental gymnastics each turn to trying to remember which way the arrows slide. It’s a minor annoyance but worth mentioning.

Did I expect Hedgehog Hop to suck? You betcha. Did it? Not even close. The gameplay is actually a bit of a brain burner, something I didn’t expect from such a small package. Speaking of, just because the box is so small, don’t except its table presence to be. While it’s super portable, you actually need a largish table to play Hedgehog Hop. Once the dance mob starts growing and sliding, a tiny table just won’t cut it. But the rules are easy to learn, the gameplay is engaging, and the playtime is all of 10 minutes. This one is an easy one to get to the table.

Final Score: 3.5 Stars – A thinky game hides under this small, portable game. Just make sure you have enough table space.

Hits:
• A bit of a brain burner
• Easy to learn, quick to play
• Very portable

Misses:
• Luck of the draw can cause issues
• Needs a good amount of tablespace