We review Heaven and Ale, a new resource management and tile laying game published by Plan B Games. In Heaven and Ale, players take on the role of monks in a monetary trying to brew beer and earn points. 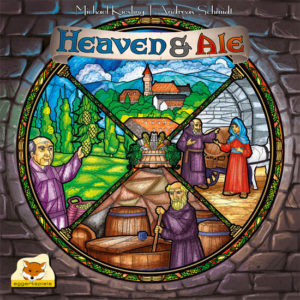 There’s a story that the phrase “one-trick pony” comes from a situation where a circus put on a display with a pony who knew only a single trick, that of playing dead. The phrase usually is one of condemnation, seeing as how it’s usually required that any form of entertainment should be adaptable to the audience. On the other hand, this isn’t always the case if that trick has some staying power.

Games are like that too. Such a title is Heaven & Ale, a tile placement, resource optimization game for 2-4 players (best with 3) which takes about 30 minutes per player. The theme, for what it’s worth, has players in the role of monks brewing ale around the grounds of a monastery. The player who brews the best ale (manages to collect the most points) wins the game. However, finding a path to a good score is a challenge easier said than done.

Players begin the game by laying out a series of tiles on the main board spaces. Hexagonal tiles represent the ingredients needed to make beer (yeast, hops, wheat, water, and wood for the fire and/or barrels). Round tiles are monk tiles. These will be useful for activating the hexagonal resources and improving the skill of the brewmaster.

During the course of the game, each turn has a player using a primary pawn on the main board to advance to a space to either acquire tiles or score tiles. By advancing to a resource or monk, that tile can be placed on a player’s personal board. By selecting a scoring space, players can utilize the monks and resources they have placed. They then transfer the purple scoring marker to their board to indicate that one of 10 possible scoring options has been used.

Each player’s board also has a series of resource markers on a track along with their brewmaster meeple. Scoring is the means by which players activate the tiles to advance their resource markers or gain money. Tiles placed on the lighter side of a player’s board will advance their markers while shady side resources will earn income. If a player manages to place their monks and resources just right, each tile could have multiple opportunities to activate and earn money or marker advancements. Maximizing this potential is the main goal of the game.

Once players have progressed through the appropriate number of rounds, based on player count, end game scoring commences. Players will begin exchanging their highest valued resources for their least valued resources. Once this is done, players multiply their lowest resource marker’s score by the multiplier listed next to their brewmaster’s exchange rate (x5, x4, etc). This results in a player’s base score, which could possibly be 0 if a player has not had enough success advancing their resources.

To determine the winner, players add any bonuses they activated from end game objectives. They only receive these if they stopped to get them with their pawn throughout the game.

As the introduction to this review suggests, Heaven & Ale feels like a one-trick pony, err… puzzle. The actions available are extremely narrow and represent a singular hexagonally shaped number puzzle. The optimization of numbers and actions to reuse those numbers is the goal pounded into player’s brain with every passing turn. Games with experienced players who aren’t burdened by analysis paralysis issues will be energetic and aggressive. With newer players unfamiliar with this kind of puzzle, play will be slow and plodding.

However, in both cases, play is often the same. While challenging, play often feels similar with each play and it’s hard to remember specific games as being distinct from each other. This feeling really shows that this game excels as multiplayer solitaire. Players are more often focused on trying to get away from the congestion moving around the main board as players buy tiles before them. The low level of player interaction will be a great thing to some, but lackluster and distinctly bland for others.

On the flip side, Heaven & Ale really excels at getting under the skin of players to immediately play again and get better. Performing well at tile placement on the player board is a feat, often requiring a thoughtful review between games. There is strategy and tactics for winning to be sure, but more often the skill of making just the right decisions to get a high base score is the motivation.

More so than other games, this is a difficult game to review. The play is addictive, but once the effect of needing to do well at the game wears off, there’s not much to get excited about for long term replay value. The game doesn’t have any mechanisms to change player board layouts or alternate options within the game (nor does this reviewer think those things would be welcomed by players who enjoy this type of game).

The biggest disappointment in all of this, much like other Euro games, is that theme is nowhere to be found. Sure the concept works for what it is, but after multiple plays, gamers will most likely get more inspiration for beer making from a walk in a wheat field than from another playthrough here.

Heaven & Ale is what it is; a product that serves a very specific taste of gamer, much like a double IPA. If a competitive puzzle to solve is the kind of pony players want to be entertained by over and over, this is the pony. For those who have seen the show and are looking for more, this trick is new and shiny for the moment, but in the long run, Heaven & Ale won’t be so impressive.

Final Score: 3.5 Stars – Step right up fans of spatial number puzzles! You will find a tent filled with magic and delight, for others, the game marketplace circus has better curiosities in store.