We review the new Harry Potter: Hogwarts Battle card game from USAopoly. In this deck building card game, players are working through the events of all four book as they try and defeat the villains in the Harry Potter series. 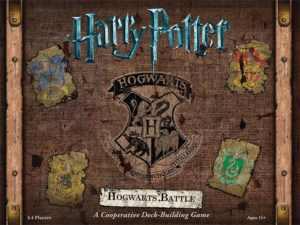 Fans of a certain teenage wizard could be heard giving a collective shudder of trepidation when the announcement of a Harry Potter card game hit the gaming scene. Pessimism abounded in the zeitgeist about the content and, more importantly, playability of the game. If a decent movie to game can ever be, pardon the pun, “in the cards” for Harry Potter fans, would USAopoly, a company more familiar with localized Monopoly reprints be the one to do it?

Harry Potter: Hogwarts Battle is a cooperative deck building game for 2 – 4 players that, depending on which game you’re playing, could take 30 minutes, or well over 90 minutes. Hogwarts Battle plays best with 4 consistent players.

Harry Potter: Hogwarts Battle (hereafter just Hogwarts Battle) takes players on a journey through the seven films adapted from the books. They span the years of Harry Potter learning at Hogwarts School of Witchcraft and Wizardry, meanwhile encountering the likes of various villains and one particular villain who-should-not-be-named. Players achieve their goals through some pretty standard deck building mechanisms and combating villains with spells, items, and companions along the way.

The main board for Hogwarts Battle is exceptionally made and holds up well to repeated plays. Although the spaces hint at what is to come, overall the board provides just the right space for card play. Included as well are player boards which focus players and provide locations for starting character cards, round reference cards, tokens, and health tracking. The cards are also of exceptional quality and can be shuffled repeatedly with little sign of wear.

The art for the components and cards fits right in the Harry Potter universe. Spells, locations, and characters are broadly represented, even with some of the more minor characters. The imagery for the cards is mainly taken from the films.

One of the most stand out components is the rulebook. It’s welcoming and well laid out, explaining as much as is needed in a friendly sequence. The additional game boxes will add rules to the game, as can be expected by the placeholder slots for rules in the back of the rulebook. The overall presentation of the game allows for repacking the game into its original state should a new gaming group inherit the game.

Probably the coolest component are the heavy metal location control markers used to denote how much villains are in control of game locations. They’re small, hexagonal metal tokens with a fearsome skull. They help to give intensity when they’re placed on a location, advancing the plot to the players’ defeat.

Hogwarts Battle presents players with seven game boxes representing an adaptive, progressively more difficult game each time the players successfully complete their objectives. There are new game mechanisms revealed with the various boxes, but the content can be predictable if players have seen the movies.

A game of Hogwarts Battle begins with setting up three primary decks: a Villain deck, the Dark Arts event deck, and the Hogwarts deck. These decks form the core of interactions with characters, items, villains, and spells. The Villain cards and Dark Arts events represent eponymous challenges or enemies to overcome while the Hogwarts deck provides allies, equipment and education in spells.

Each player’s turn begins with revealing a certain number of Dark Arts events based on the current location, represented by a card in the upper left corner of the board. Usually three stacked locations are present for each game. Dark Arts events represent the machinations of the villains as they seek to gain control of the location. Some cards directly harm the players. Other events will cause harm only when certain cards are played, or they might add location control markers to the Location card.

Next to be resolved on a player’s turn are any Villain Card effects. These are similar to the Dark Arts events but, because they stick around from turn to turn, they have the potential to form combinations with the event cards or with other villains (not a spoiler because the game board shows spots for three villains). Once multiple Villains appear, players should know the game strategy can change.

Hopefully, if a player isn’t too aggravated from dealing with all of the above, the main part of a player’s turn begins. In this step, cards are played from a player’s hand to gain influence to purchase Hogwarts cards, gain lightning bolt tokens to damage the villain, regain health, or draw cards. The influence and lightning bolt tokens are mainly used to keep track of how many of each a player has, placing them on their player board. This is key because it is possible to gain these tokens on another player’s turn, adding to the total available to the player on their turn.

The game continues in this pattern with player turns until all villains are defeated (player victory) or control markers are placed on all locations (villain victory). Players can progress to the next game box or replay if they did not achieve the box’s objective.

To cut to the chase, Harry Potter: Hogwarts Battle is a good game. It doesn’t deviate from tried and true deckbuilding patterns and implements some nice cooperative elements. Non-gamers experiencing a deck builder for the first time will be enthralled. Gamers with some deck building chops will pick up on the play quickly and should really start with the Game 3 box. It still won’t wow them, but it cuts out some softballs that serve to train those not versed in the mechanisms.

Spoilers can be found below, but without revealing anything, the content in each box is interesting, but not amazing. The continued tutorial format builds to a crescendo with the Game 7 box which presents a legitimately hard game. The number and combination of mechanics at that level is precisely on the level with many other deck building games. Unfortunately, to be more specific about what causes the reduced rating, spoilers will be revealed.

The primary let down of Hogwarts Battle is that characters only seem to improve through game effects presented as character abilities and proficiencies. Never are characters allowed to keep cards from one game to the next, much as would be expected in a campaign style game. It definitely feels like all the labor from one game of building a great deck would be rewarded with being allowed to keep one or two cards into the next game.

In addition, character abilities (presented in the Game 3 box) are specific and immutable until the Game 6 box (called Proficiencies). This is exceedingly late in the progression to allow players to change abilities or upgrade. By this time, games will take 90 minutes easily due to the overwhelming card and ability management necessary. Also, each character’s full power ability appears only in the Game 7 box.

One other conspicuous miss is the lack of any ability to remove cards from a player’s deck permanently (trash a card). This is most likely balanced by the tremendous number of villain abilities which cause cards to be discarded from a player’s hand, but even so, the inability to truly craft a deck is keenly felt. Even if there were an ability to replace cards in a character’s starting deck between games that would offer some continuity and sense of a journey. As it is, each game feels like starting from the beginning.

The feeling at the end is that the journey really begins in Game 3, ramps up quickly, and never remembers what came before. This is not a legacy style or even campaign style game. It’s a progressive tutorial for the real game which is contained in the Game 7 box. If players have seen the movies, they’ll know the characters and locations they’re likely to see. The slow reveal doesn’t really add anything except anticipation or education.

Harry Potter: Hogwarts Battle is a wonderful introduction to cooperative games and deck building for new gamers. It deserves high praise for achieving those goals. Where it falters are in areas that experienced gamers will notice. At times it is frustrating and the game time ramps up, but the overall play in Harry Potter: Hogwarts Battle leaves a satisfaction of a well-designed cooperative experience.

If you’d like to pick up a copy of Harry Potter: Hogwarts Battle, you can get it for about $50.

Final Score: 3 Stars – Experienced gamers may find little to explore, but wizened or junior deck builders will enjoy the cooperative and strategic play.

Misses:
• Later games are much longer than early games
• Desired play mechanisms absent
• Not as many options for deck manipulation