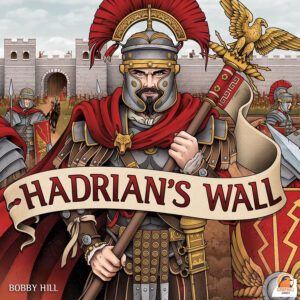 God, not another verb-and-write game. I assume that’s why you clicked here so I’ll jump right into it. Do I think you need another one in your life? No, probably not. But is this one worth checking out? Yeah, I would say so. But you’ll have to read my review to find out why I think that. Or maybe you will just scroll to the bottom and read my summary. I can’t tell you what to do. Live your best life, boo.

Hadrian’s Wall, from Renegade Games and Garphill Games, brings you the next flip and write game with a Roman theme you might want to try.

Before your eyes gloss over the spreadsheet-like player board, let me explain the game in broad strokes because it’s much less overwhelming than at first glance. At the beginning of each round, a card will be flipped over that shows what workers and resources all players begin with. Once you’ve taken those into your supply, each player will draw two cards from their personal deck. Here, you’ll have to decide which card to use for additional resources and which will be your guide for gaining end game points.

Now that you have your workers, resources, and some focus for scoring points, everybody takes their turn until they either run out of workers and resources or can’t place any more. Try to be as efficient as possible because unused resources don’t carry over between rounds. After everyone has placed their workers and used their resources, it’s time to brace for the attack.

Depending on the round and your difficulty setting, a certain number of cards will be drawn. This will show the players where the incoming invaders attack. After the damage is assessed, the round ends and the next one begins. The game will be played over six rounds and at the end, whoever has the most points, wins. Although this doesn’t cover all the ins and outs of the rules, this should give you a pretty good picture of how the game flows.

Verb-and-write games are a dime a dozen. I’ve played somewhere between five and ten, all at different levels of complexity and satisfying gameplay. I don’t go out of my way to play every one of them, but I’m always up for a pleasant surprise. Such is the case with Hadrian’s Wall. It’s got a bit of a learning curve, and I definitely wouldn’t use it to introduce the verb-and-write genre to a newcomer. But if you feel comfortable with the mechanic and have played more complex ones such as Fleet the Dice Game, I think you’ll be right at home and very satisfied with the experience.

There are a lot of choices in what a player can do with their turn. Some might think that the many pathways are too plentiful, but I think that’s one of the benefits of having the end of game bonus cards each round, especially in your first few games; it helps provide direction and it’s the place I’d direct a new player to pay attention to, to avoid having that aimlessly wandering feeling after learning a slightly heavier game.

Now what may be satisfying to one person doesn’t mean that it will be for another so let me talk specifically about what I enjoyed most about Hadrian’s Wall. It’s the combos that can be pulled off. While I am admittedly not the most at home as an efficiency player (just go read Andrew’s Tapestry review to see how terrible I am), this game forced me to be efficient in order to hit some very satisfying combos. Properly setting myself up at the end of one round to trigger the ability for me to gain four additional workers by one action, it doesn’t get much more satisfying than that.

But even if efficiency and planning ahead is not your strong suit, you’ll still be able to hit some bonuses, and it will definitely get those mental wheels spinning about how you can do that more often. I know it made me think about that after my first game and how I might play better against my next opponent.

Speaking of opponents, let’s talk about the level of interaction and how well the game scales. Hadrian’s Wall is by and large a solo experience. Your actions won’t set your neighbors back and typically will actually benefit them as well as yourself. For example, there is a scout action that allows you to Tetris-style fill in a section of your board to gain some benefits. You can use your neighbor’s shape and give them a resource to use. Some people might find this level of interaction boring and not aggressive enough, but it’s honestly par for the course for verb-and-write games.

So how well does the game scale in player count? By and large, quite well. The rules don’t change much, so you won’t have to learn a very modified version of the game if you decide to play with two or five people. What changes are there are pretty minor and easy to remember. But regardless of the number of people you can get to play, I think all will have an equally enjoyable experience.

I want to talk a minute about the theme, specifically a particular aspect of it that I feel some users would want to know about and could possibly impact their decision to buy the game. First off, obviously, it’s a Roman theme as you could probably tell from the artwork but really it could have been anything. The theme wasn’t really integral to this design. But a particular aspect of this theme, which they make a point about in the rule book, is the fact that one of the represented workers are slaves.

It feels very weird to me to play a game that has slaves in it, especially when you start to look around the board and see how they are used, which is usually in labor or other expendable roles and that feels really uncomfortable. Now before you think I’m getting on a soapbox for cancel culture, I understand that slavery was a part of Roman society. Anybody who’s completed high school knows this fact and I’m not denying its history. I’m simply saying, did that really need to be an aspect in this entertainment medium? I don’t think so. In fact, an easy fix for this could have been having different colored workers with no titles. Theme is pretty irrelevant, especially for a verb-and-write game, at least that’s mostly been my experience. So I wish something else had been done on this aspect of the workers.

Lastly, I don’t typically comment on the price of a game, but I feel like that’s necessary here. If you’ve been in the market for other verb-and-write games in the past, you’re probably used to paying no more than forty dollars tops. The MSRP for Hadrian’s Wall is fifty-five and I think that’s more than most people would pay, especially for this type of game. This game comes with a ton of sheets. Like, it fills 75 percent of the box. So you’re definitely going to be able to play it a lot. Probably not fifty times but you’ll be able to play it enough that you’d still have plenty leftover when you eventually sell it.

Overall, Hadrian’s Wall is a really enjoyable flip-and-write game, maybe one of the best I have played. With the numerous pathways and strategies for people to try out, I think folks who get into it will want to play it many times. Although I don’t think this is a game for beginners of this mechanic, it’s easy enough to learn the basic concepts and play through a game. While hitting combos made me feel like I was getting this whole efficiency playing thing down, my opinion of Hadrian’s Wall overall was a little tainted by the inclusion of slaves into a theme that didn’t require it.

Hits:
• Lots of pathways and strategies will equal a lot of repeat plays
• More advanced verb-and-write gamers will appreciate the complexity
• The game scales well
• Not many special rules to remember if you’re playing with two or fewer people

Misses:
• MSRP might be a hard justification for some
• Slaves are a part of the “theme” and it wasn’t necessary