We review the card game Guillotine by Wizards of the Coast. Guillotine is a quick little filler game that's great to fill out any game night.

When we think back to moments in history, we see how the game designers found inspiration from the past in a board game theme and mechanics.  Building the ancient seven wonders, railroad building in the United States, settling on a new continent,  and the beheading on nobles by using the guillotine during the French revolution.  Ok, the last one not so obvious, but I think that is where the designer for the card game Guillotine

got his inspiration for this game. 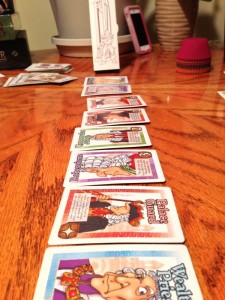 The game takes place over three days (rounds), where 12 nobles are put in a line to be executed by the guillotine. Each noble has a value on the card, with the highest values saved for the most loathed, Louis XVI and Marie Antoinette. The players job is to manipulate the order of these 12 nobles by using action cards in their hands to move different nobles to the front of the line, or some other action to get the highest value noble to be placed in their scoring pile. When all the nobles are gone, another day begins. After three days of head rolling, the player with the most points wins.

Components for this game are sparse, due to it being a card game. The art design is done tastefully using a cartoony-style for both the nobles and the action cards. Had they done something a little more graphic, I wouldn’t have liked the game as much and there would be no chance a young child could play. The only other component is a standing cardboard guillotine thing that comes with the game, which I find pointless. Its purpose is to show what noble is next in line to be executed, but this could of easily be done with a card. It makes the card box large than it needs to be and makes the game far less portable. Also the rule book is a little sparse. I feel a little more explanation on how to play a few of the action cards would of helped. Not a big thing, but would be a nice addition. 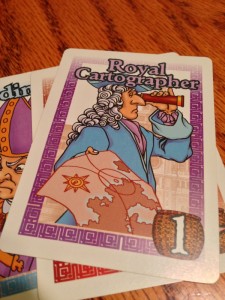 The game play is simple and a turn is done in three parts:

This is where the game is won and lost. The action cards are varied in what they can do and add tons of flavor to the game. They can be simple, move a noble up in line or back, but some are much more impactful to the rest of the players. These include reshuffling the order of the nobles, trashing all the action cards in players hands, trashing another players noble, and many other cards that can aid you and mess with others.

2. Collect the first noble in line. 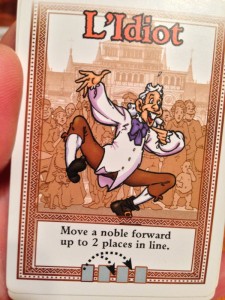 The experience I had with this game varied during each game we played, three in total. However, all of them were positive. The first game that we played, everyone was feeling the game out. The game was really easy  to teach to the other players. Within four turns, everyone knew how to play and was thinking strategy. The first game we played, we were very nice to one another, not playing many cards that would mess with others and trying to just go for the high point cards. After we finished the first game, everyone wanted to play again, a great sign for a game. The next two games became quite cutthroat. The gloves came off and we started playing action cards to wreck havoc with the other players. All the other players quickly made enemies with one another and kept attacking each other. It was quite fun to watch this unfold. Seeing each of the other players look for ways to get revenge on that last player that screwed them was entertaining and a surprising change from the first game. I’d have to say, the last two games were easily the most fun. The quick playing time of Guillotine made it possible for us to get 3 games in a short session, so even if a player suffered the brunt of another players assault, the next game was not far away.

The issue with simple card games like this is that people can tend to get bored with it quickly. The game play can become repetitive and the strategy to win is clear. This isn’t the case with Guillotine

. With the fifty plus noble cards and sixty action cards, the game play is never the same, but isn’t so random that it becomes luck driven.  It isn’t a deep game, but as a filler game it fits the bill. Guillotine

is a great game to have in anyone’s collection.

Final Score: 3 Stars – If you need a quick card game to round out your collection you can’t go wrong with this game. One of the best filler games out there.