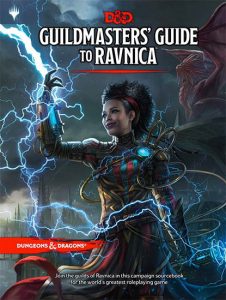 Dungeons and Dragons has, clearly, been the preeminent role-playing game on the market for decades. Fifth edition has been a critical and commercial success and the folks at Wizards of the Coast continue to produce additional content for D&D fans.

That said, outside of a couple one-shot campaigns, I’ve played basically no role-playing games. Yet I’m digging in today to the Guildmaster’s Guide to Ravnica because my passing interest with D&D has come crashing head first into my life-long love of Magic the Gathering (MTG). I hoped this guide would provide spark to my gaming group that, like me, leans more toward MTG than role-playing.

For those that aren’t caught up on their Magic the Gathering flavor, Ravnica is one of the most popular settings for the collectible card game. The Ravnica world revolves around ten guilds—made up of each color pair from the card game. Each guild has their own characteristics and flavor that translates well to a role-playing setting. The Azorius, for instance, are the lawbringers in Ravnica. They make up the judges, senate, and enforcement officers throughout the districts. Perhaps the other end of the spectrum is the Rakdos. The Rakdos thrive on mayhem. They disregard societal norms and prefer to just throw crazy parties with death-defying acrobats and fire jugglers providing the entertainment.

The Guildmaster’s Guide spends nearing 100 pages detailing the ins and outs of each of the 10 guilds. In additional to a thorough discussion of the guild’s background, it suggests classes and races that fit well into the guild membership. There are also ranks in each guild that your character can achieve, giving them additional flavor as they work up from a nobody member of a guild to perhaps the leader of the Rakdos circus.

The Guildmaster’s Guide to Ravnica adds five new races straight out of Magic lore. For your Ravnica setting you can create a centaur, loxodon, minotaur, simic hybrid, and vedalken. Of course, you can use humans, elves, or really any of the existing races other D&D material as well.

The race section of the guide includes suggestions for races based on which guild affiliation you are entering. The calm, nature-guided loxodon would be out of place in the science-focused Izzet guild, but perfectly suited for a Selesnyan character. This chapter also gives you suggestions for a classes by guild as you would be more likely to encounter a barbarian in the Gruul guild than, say, the necromancy-focused Golgari.

In sum, the guide gives you plenty of ways to go about creating a character. While you aren’t necessarily tied down by any of the suggestions, if you have a particular class, race, or guild you want to play, the book can lead you to creating a character that will fit well within the framework of the Ravnica world.

Ideally your adventuring party will be made up of characters from a guild—or maybe two—allowing your DM to create an adventure based on the overall goals of that guild. This does make it difficult to have player characters from all of the different guilds involved as many have diametrically opposed world views and would be hard pressed to create a story where they are working together. But if your DM wants a challenge, that would be a good one.

The Guildmaster’s Guide to Ravnica includes a short introductory adventure that is perfect for getting off the ground. There isn’t any additional fully-fledged out adventures but there is a section for each guild to help the DM after the introduction is over. These sections are unfortunately short, giving only a few suggested villains and story hooks but little else to help an inexperienced DM

The last couple chapters include item and NPC stats for various treasures, villains, and helpful strangers you could encounter wandering through Ravnica. DMs will find these useful to weave into a story using characters that are present in both Magic the Gathering and the world they are creating for the players.

The Guildmaster’s Guide to Ravnica is over 250 pages of material that experienced DMs who want to run a campaign in the MTG universe will no doubt find extremely helpful. The book is well organized, full of amazing artwork, and contains endless amounts of backstory about the guilds of Ravnica.

The biggest shortcoming is that it fails to be a good entry point into D&D for experienced Magic players. It is way more likely to be successful for a D&D player to get introduced to the world of Magic rather than the other way around. If you have little to no experience with running a Dungeons and Dragons campaign the Guildmaster’s Guide to Ravnica isn’t really going to hold your hand through the process.

Final Score: 4 Stars – A great resource if you want to run at D&D campaign in Ravnica.

Hits:
• Tons of backstory on Ravnica.
• New races and character suggestions based on guilds.
• Well organized and beautifully illustrated.

Misses:
• Only a short introduction adventure is included in the book.
• MTG players wanting to give D&D a shot will need a lot more material.