We review Gugong, a eurogame published by Tasty Minstrel Games. Set in the China during the 1500s, Gugong has players collecting gifts for an audience with the emperor. 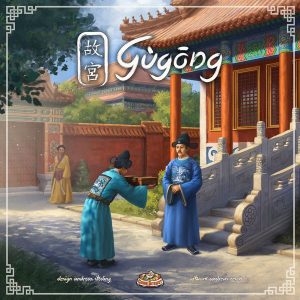 “Here. Review this,” said Tony. He was holding Gugong.

“Nice!” I exclaimed, reaching out for the game.

“Not so fast,” he rebuked, pulling it away from my outstretched hands. “What do you have to exchange for it?”

After several awkward seconds, I removed a picture of Lionel Richie and a TGI Friday’s gift card with a $2.14 balance from my wallet and handed them to Tony. “Here you go.”

His eyes lit up. He greedily snatched the “treasures” from my hand, gave me Gugong, and sprinted home, yelling “Sucker!” over his shoulder.

Most of you would think that I got the better end of the deal. That’s because most of you do not know how much Tony loves Lionel Richie.

Gugong is a game of gift exchanges (bribing) set in China during the 1500’s.

For this review, I played multiple games at player counts of two, three, and four. The game length varies based on number of players, lasting from 60 to 120 minutes.

The game is played over four days (rounds). Each day is made up of three phases:

The game ends after four rounds. After final scoring, winner is the player that a) obtained an audience with the Emperor and b) had the most victory points.

I will make this straightforward. This game is targeted at the multiplayer solitaire, point salad Euro gamer and it delivers!

Like most point salad games, there are a multitude of ways to score points. This game presents them in the form of seven locations, ranging from straight forward (purchase Jade, which is worth exponentially more based on the amount jade owned at game’s end), to the slightly complex (The Grand Canal, which has limited spaces, is shared by the players and, if not managed properly, can result in your ship and efforts being lost at sea).

The most important location, and one of the reasons I like this game so much, is the Palace of Heavenly Purity. If a player does not hold audience with the Emperor (move their Envoy to the end of the Palace track) before the end of the game, THEY CANNOT win the game. This takes Agricola feeding anxiety to a whole new level!

I really enjoyed the gamesmanship this location creates. Moving your Envoy too often at the start of the game will allow your competition to claim valuable opportunities in other board locations. For example, the Decree location offers six decrees that grant immediate points and unique powers or end game scoring bonuses. As players claim them, they get more expensive for their opponents. But if you wait too long to move your Envoy, it may become very expensive to make sure your Envoy sneaks into that audience before the game ends.

How can a location become expensive? Through the main action in the game – gift exchanges. I LOVE this concept. Gift cards have a value of one through nine. To activate a location, you must provide a gift that is greater than the location’s card value. If you do, you move location’s card to your discard pile and replace it with the card you gave. If the gift card you gave has an action, you can do that action as well as the location’s action. In addition, you have increased the cost of that location for every other player!

What if your card’s value is equal to or less than the other gift? You have three options:

The first two options allow you to use the location’s action (or both actions if your lower valued card had an action on it), whereas the third option is used to grab a card for a future turn and/or to match the destiny dice. Balancing when to give a higher value card vs. a lower value card (perhaps you have a surplus of servants, for example) is one of the fun decision points Gugong provides.

Balancing is where Gugong shines. Being conservative vs. aggressive, when to make your move vs. hold back. Do you overspend to make sure you build the last section of the Great Wall before it scores or do you go the safe route and perform a Travel action to gain some needed servants? Should you try to unlock the double servant, a VERY valuable resource, from the Canal location even though it will cost you the rest of your cards this round?

Finally, there is the game’s length, which contributes to the balancing nature of Gugon. Four rounds are the PERFECT game length. It really limits the number of actions you get in a game, so you better make each action count. This helps keep the overly aggressive player in check.

So, this is my first 5-star game? No, it is not. I had a couple of minor issues with Gugong.

First, the theme is pasted on. The art, the board, and the gift cards are all gorgeous. But, like many Euros, you could replace the theme and still have a great game. You could make this about diving and the numbers could represent oxygen and you would have the same game.

I am happy to own Gugong. I love the pace of play, the balancing required to win the game as well as the fact that, if you do not visit the Emperor, you cannot win.

If you like point salad games or games that force you to balance being aggressive vs. conservative, I highly recommend Gugong!

Hits:
• Fun decision to make with the gift exchange mechanism
• The Audience with the Emperor mechanism is a great concept
• Playtime is just about perfect

Misses:
• Play for the game, not for the theme
• Stay away if you do not like point salad