We review Great Scott!, a humorous card drafting game where players acting as inventors who are trying to build great inventions and gain the most VPs to become Queen Victoria’s Royal Inventor. 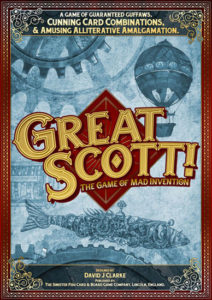 The Victorian age brought us many wonderful inventions we take for granted today. Things like the telephone, automobile, and the lightbulb to name a few. The Victorian age also brought us many bizarre and impractical inventions that luckily we don’t see today. Things like rocking bathtubs, flying bicycles, and toilet masks – I wish I was making these up.

The latter Victorian inventions bring us to the game we’re going to review today, Great Scott! by Sinister Fish Games. This card drafting game has players acting as inventors who are trying to build great inventions and gain the most VPs to become Queen Victoria’s Royal Inventor.

The goal of Great Scott! is to amass the most points at the end of 3 rounds.

Each player will start with 6 Commendation cards. Players will then setup the 3 Concept Decks and split the Asset Deck into 2 piles. Players will select 2 cards from each Concept and Asset Deck, starting with 10 total cards.

Each round, players will draw one card from any of the 5 decks and add it to their hand. They then choose one card and simultaneously reveal it, placing it face up in their play area. The rest of their cards are passed to the left. This action is repeated until 5 cards have been chosen.

After each presentation, players will tally their invention score. They get points for matching cards, concept and asset values, and commendations, among other things. The player with the most VPs after round 3 scoring wins and becomes the Royal Inventor.

I have many friends who should be considered gateway gamers (GGs) and when around me, I force them to dip their toes into gaming waters. To help me with this review, I made many of my GGs play Great Scott! All the players enjoyed it and many wanted to play repeatedly. Because of that, Great Scott! has now usurped 7 Wonders as my card drafting gateway game.

My reasoning is simple; my GGs shied away from 7 Wonders mainly because they were intimidated playing with players who have mastered the game. Great Scott! is fast paced and the decisions are rather simple by comparison to 7 Wonders; draw a card, pick 1 of 11 to play, and pass to the player on your left, and pitch your invention. My gateway friends don’t feel like they’re missing something while playing Great Scott! with seasoned players.

All my GG buds and I really enjoy the social aspect of Great Scott! This game goes beyond the cards laid out in front of you because once you build your invention, you have to pitch it. And if you sell your invention to the other players well, then you’re rewarded with additional VPs in Commendation cards. It’s a nice incentive to put some effort into your pitch because it can directly affect and help you win.

Now, unfortunately with any social game, you do really need to play with the “right” players who like these types of games. If you have any gamer buds who are not into social games then Great Scott! is not for them. If you push them to play, then do it at your own risk. You’ll likely just get frustrated and spoil the game experience for others.

The last big plus for GGs and gamers alike is the level of humor to Great Scott! It will become apparent, when you look at your first ten cards, that the invention you finally build cannot be taken seriously. Maybe not as bad as a toilet mask, but close. And when you present and pitch your invention, you generally become almost a side-show barker trying to convince other players that they need and cannot live without the goofy invention you created. Overall, Great Scott! gives players plenty of humor as they build and present their inventions.

Like any games with decks, the constant negative is that luck can be significant for some players. There’s no way to fix bad luck, but the card drafting and constant hand movement gives players a good sense of controlling their fate (or at least makes them think they can).

Great Scott! is an excellent gateway game for new players, but also has plenty of humor and fun for any seasoned gamers as well. It’s a fairly easy game to learn and play and Great Scott! has become my new gateway card drafting game for my GGs. Players should beware that this is a social game, if you’re not into those types of games then avoid Great Scott!

Misses:
• Need the “right” players to play
• Luck is significant to game enjoyment