We review Grackles, an area control and tile placement game published by Fireside Games. In Grackles, players are trying to get their birds to be in the longest line possible

“The grackle’s voice is less than mellow,
His heart is black, his eye is yellow,”
– Ogden Nash 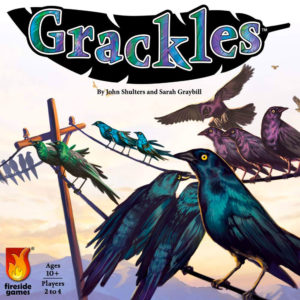 In Grackles, you’ll attempt to place as many of the titular birds on a row before your opponents can cross your wires. Plan carefully though as while they seem to be numberless, only so many Grackles can fit in a space. It won’t be long before you’ve reached the end of the line…

To start, each player chooses a color. The two Starting tiles (they form a black diamond when placed together) are set in the middle of the game space and the rest of the tiles are shuffled and placed face down nearby.

To place a tile, the player draws from the top of the face down tiles. The newly drawn tile must be played adjacent to a tile already on the board, placed in whatever orientation the player chooses, and cannot exceed five tiles long on any side. To place birds, a player lays their tokens covering a straight line of empty spaces between their color circles on the board. Later, the player can extend their line to another empty spot as more tiles fill in (lines can only be extended in the direction they started, however.) Lastly, each player has five opportunities to rotate an empty tile by picking it up and re-orienting it.

After all 25 tiles have been placed in a 5 by 5 grid, players continue laying birds, extending lines, or rotating tiles until there are no more options left. The birds on the board are counted – most birds on the wire wins!

The common Grackle is native to almost all of North and South America. They’re a regular sight for car trippers, lining telephone and power lines across the country. One of the many road games I played as a child involved counting as many birds as you could in the space of a certain amount of mins (or until one’s younger sisters got bored and resumed coloring or annoying dad.)

Like its namesake, Grackles is all about lines and the longer the better. Start building strategy early. Wasting a turn or two for set up or to get a handle on what your opponents are doing will leave your sorely behind or worse, blocked out of the better, more open sections of board.

Grackles also evokes another childhood memory – playing dots in school. And you’ll know exactly what I mean the first time you place a tile the wrong way and you’ll gain one or two spaces and watch an opponent gain several.

Player aids help remind you of your available actions, though the basic actions are simple enough that you should pick them up quickly.

The style is simple, but perfect for the theme – black lines crossing a blue sky make up the tiles and the player colors evoke the iridescent birds themselves. Additionally, the color variance is helpful for those with vision challenges.

While Grackles can be played with two, I think it’s better suited for three or four. Two player can feel very seesaw like but with four players fighting for control being precise and watching every move or placement is far more important. Max players has better engagement and competition.

Grackles is a short, strategic area control game that will appeal to casual gamers and abstract strategy fans alike. Grackles shines at higher player counts, but can be repetitive for just two. The theme and style play together nicely.

Hits:
• Forethought required from the first moves, no early lull in the level of strategic planning
• Lots of competitive interactions
• Great colors and clear game board

Misses:
• Two player can drag a little and feels somewhat less strategic
• Rotation action can occasionally shift other tiles if the empty one happens to be between them
• Tiles are somewhat slick and occasionally the pieces move