We review GoVenture, a set collection board game that features two different themes in one box. You can either play the Entrepreneur version or the Monster version. 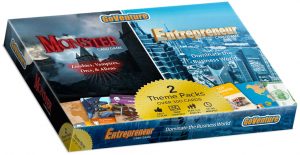 What do monsters and entrepreneurship have in common? A single card game mechanic. And not much else.

GoVenture is a card game that can be played with two themes. If you’re in a workday mood, you can teach your youngest entrepreneurs how to succeed. And if it’s spooky time, maybe the fantasy deck is just right for your little monsters. Learn one game and your family can play either. But does two in one really equal double the fun?

GoVenture is a set collection game for 2-6 players. It plays in about 20-30 mins. GoVenture is best with 5 players.

In GoVenture you can use the same mechanics to play two different games – Entrepreneur or Monster.

Players are attempting to collect costumers by selling them products. You’ll do this by collecting matching products and costumers and purchasing businesses at which to sell your wares. (In Monster, you’ll collect monsters and bounties and finish them off with purchased weapon cards.)

In both games the first player to collect $20 or to complete all three world objectives is the winner.

Less is more, particularly in board games. In the case of GoVenture, it seems like trying to shoot for duality made each game a little lesser. I genuinely liked the entrepreneur theme – for a family game its got a different mechanic for buying and selling that’s less competitive and as such less likely to cause hard feelings. The monster theme seems somewhat tacked on – like someone in marketing said “but gamers like zombies” and stretched that skin over the mechanics to fit.

I did like the game win variation – there are two major strategies that could play into different levels of gameplay as a result. It definitely supports being played as a family, where a younger child might use a more straightforward strategy (earn $20) while and older one might chose to go for world event collection.

Unfortunately, its a let down visually. The monsters, while interesting, are drawn with differing levels of ability (the dragons are very good, orcs not so much.) The Entrepreneur deck is just stock art of everyday items. The dual picture cover is confusing and so, in general, it doesn’t convey anything about the game or who the intended audience might be.

The gameplay itself isn’t wildly interesting, but it’s a nice intro to set collection for younger or new players. Collecting itself is pretty basic (have x, y, and z to complete an objective) but a hard hand limit will keep players rotating whats in their hands. There is a trade mechanic, but none of it was used on any play through, it just didn’t seem necessary. Perhaps with a younger group this would give players more to think about when collecting.

Ultimately, I think GoVenture would have been better served putting all their effort into one good game instead of two dull ones.

GoVenture is a mechanically sound but otherwise lackluster intro to set collection for families with new gamers. The dual themes detract rather than add to the game itself. Less direct competition might be helpful for families with tots struggling with winning and losing gracefully.

Final Score: 1.5 Stars – Double the games does not equal double the fun.

Misses:
• Art detracts rather then adds to either theme.
• Monsters theme feels tacked on.
• Nothing for even moderately skilled players.