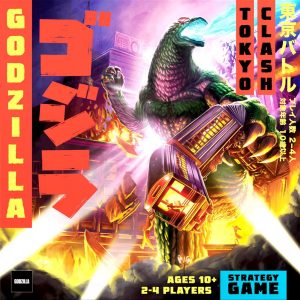 I’m an 80s kid and I loved watching the giant monster movies of the 70s & 80s growing up. Godzilla was, of course, my favorite and I would be glued to the tv as he would smash up Tokyo and other parts of Japan. Some of the movies shifted to Godzilla becoming a would-be “protector” of Japan against other giant monsters… but the jury was out in my book because I think he just wanted to remind those monsters that he was the boss Kaiju.

This brings us to Godzilla: Tokyo Clash from Funko Games. Players chose to play 1 of 4 monstrous Kaiju to battle to be the king and they have chosen Tokyo as their battleground. Does a giant monster battle royale sound like fun to you? If so, then read on!

In Godzilla: Tokyo Clash, players choose a Kaiju and shuffle their Kaiju deck, drawing a 5 card hand. One player will randomly receive the King of the Monsters token and they will be the first player.

A game is played in rounds and each round consists of 4 phases.

Important things to note: to play most Kaiju cards will cost energy and Kaiju will gain energy as they destroy the buildings or Event card tokens.

When a Kaiju is damaged, players discard cards from their draw pile and add them to their discard pile. When a Kaiju damages another Kaiju, the player inflicting the damage selects 1 card with the highest Dominance Value and adds that card to their trophy pile for end game scoring. If a player damages the player with the King of Monster token – they steal it and gain that token.

Also, as small buildings are destroyed those tokens are added to the Damage Track – when the Oxygen Destroyer token passes any small building tokens then the end game is triggered. When that happens, the player with the highest Dominance Value total from their Trophy Pile is the winner (King of the Monsters token provides +2 to the end game total).

I said in the opener that I loved watching giant monster movies as a kid (and still as an adult) and what I loved most was the destruction of the miniature city sets. There is something satisfying about watching buildings being smashed and trashed. Godzilla: Tokyo Clash brings that pleasure into game form as an essential energy-generating mechanic. Depending on the building and token type destroyed, you can generate more energy and even gain additional bonuses that add to the gameplay.

Godzilla: Tokyo Clash does include minis, maps tiles, and tokens but what drives the game’s action are the Kaiju Cards. These cards are excellently customized to each Kaiju and provide attack, movement, and defense actions like what you would have seen in the movies. A cool feature with the Kaiju cards is that you can spend the power cost to complete all actions/effects on it or if you don’t have the power you can use the discard action (each Kaiju Mat has two listed). Some of the cards also can include a Momentum effect that allows you to keep playing other Momentum cards and chain their effects. And finally, some Kaiju cards can be played as enhancements that stay in play until removed. In all great multi-use card system that gives players plenty of options to choose from.

I was impressed with how well the designers tied the gameplay into the theme of Godzilla: Tokyo Clash. All aspects of this game are taken from those 70 & 80 movies (especially the Xilien Invasion event card) and does an excellent job supporting the giant monster attacking Tokyo theme you should expect when reading the rules and playing this game. Overall, all the excellent components and solid rules do a solid job supporting Godzilla: Tokyo Clash giant monster theme.

I really did enjoy playing Godzilla: Tokyo Clash but my only issue was the Range attack rules. The only way to destroy vehicles and buildings was to throw a vehicle, opposing Kaiju, or an attack if your Kaiju was in the same hex. Now, it’s fun don’t get me wrong, but I found it frustrating that I couldn’t just use Godzilla’s Heat ray to destroy any buildings or vehicles because it was a ranged attack. Those only target other Kaiju, making it not an option. So, I think this was a miss with the rules for me.

The last thing that may become an issue for giant monster movie fans and players overall is the base game comes with only 4 Kaiju: Godzilla, Mothra, King Ghidorah, and Megalon. All great Kaiju from movies of old and new (except maybe Megalon – had to look him up). So, as you can guess I want more Kaiju and some of my favorites like: Rodan, Mechagodzilla, King Kong, or Destoroyah. Hopefully, there are expansions in the works and ideally, these will add to the game play but for now, you’re stuck with just the 4.

I love giant monster movies and Godzilla: Tokyo Clash makes that love come to life in board game form. Players will use their multi-use Kaiju cards to level Tokyo and ideally, each other, to prove who is the king of the monsters.

What holds Godzilla: Tokyo Clash back from scoring higher are fiddly range attack rules and the fact that only 4 Kaiju are included in this core set. Ideally, with time some errata and more Kaiju expansions will change this and I would gladly score this game higher.