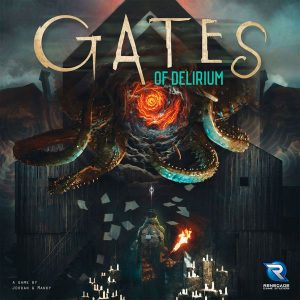 INSIGNIFICANT MORTALS! It is I, the GREAT CTHULHU. The bringer of gaming knowledge is back to deliver more educational information for a me-themed game. I’m glad you have seen the light and forsaken Lord YouTube to read my ancient wisdom. You have chosen wisely.

The human Tony tells me it’s good if I also “plug” my previous works of Cthulhu: The Great Old one, Necronomicards, Pocket Madness, and All Manor of Evil. Apparently, in this universe, when a human “likes” you or “mentions” you or “tweets” you, it is valuable. So I command you to mention the tweets of my liking!

Today I write about another game of interest, Gates of Delirium. An exciting name! Unlike the steaming pile of Mi-Go droppings that I reviewed last “time”, this challenge presented by the human Tony is a game of control of areas with tiny human pawns, collecting sets of thick paper showing symbols, and selecting an action type which others will need to follow. It’s a game for 2 to 4 mortals that takes about an hour. If you are Lord of your gaming group, summon three others to game night for 4 players and it is maximally enjoyable.

Gates of Delirium functions more as a children’s training scenario for the New England Cthulhu Outreach Foundation (my new non-profit organization). Players will take actions to collect map fragments, lost pages, ancient runes, and manipulate followers on the map of New England which is the game board.

At the beginning of each round, the first player chooses whether the round will be a “sane” or “insane” round. This is amusing to me because human sanity is truly a spectrum of how well mortals are aligned with the Cthulhu brand. Misinformation like this is what the Cthulhu Outreach Foundation is all about.

Each card in a player’s hand presents a binary choice of actions based on whether the round is “sane” or “insane”. For example, on a single card, it could have a map fragment for a “sane” round or a rune to be collected on an “insane” round. Depending on the type of round, players will be looking at one half of the card or the other.

For a “sane” round, players can play cards representing map fragments or lost pages as they discover the “cults” of Cthulhu and other old gods. These will score points at the end of the game with different set collection mechanisms. Players can also dispatch “investigators” by placing tiny wooden mortals on the board. Apparently these represent humans in need of Cthulhu re-education and are looking for an Outreach Foundation Education Center. If a player has the most investigators in a region when a gate for that region opens, they score points immediately.

However, for an “insane” round, other play options are available. Players can play cards representing ancient runes which score in yet another set collection style. They can also play cards to construct a gate by placing them in a rondel shaped arrangement. The face of each card shows one section of a colored burst for the gate opening. Since different gates require different numbers of cards, this is the means to control how often regions of the map will score. Finally, players can also convert investigators from other players to their own color.

As for scoring, one of the highest sources of points comes from the opening of gates. When a gate is opened, a “monstrosity” is released. It’s more of a cute pet, but such is the mortal perception. These creatures have a point value which increases as each additional “monstrosity” is released. In addition, they also cause Scroll cards to be revealed which change the game rules depending on the card. After points are awarded for having the most investigators in a region, all investigators in the region are removed from play. I guess the “monstrosity” needed feeding.

When the final “monstrosity” is released from a gate, the game ends immediately. Players will count points from their runes, map fragments, and lost pages, as well as scoring one point per investigator remaining on the map.

Let’s get one thing straight. If unsuspecting mortals out there are looking at this box cover and see the words “A Game by Jordan and Mandy” expecting some friendly flower arranging style game, THINK AGAIN! This product lives up to my brand. The “sane” vs “insane” actions, even if a little gamey, work well. The game doesn’t progress without players taking actions from both sides and often players will constantly be promoting their objectives to the current deciding player.

The other delight that these mortals have brought to this game is quick, interesting play. This often results in confusion over what type of turn it is (sane or insane) since players are often anxious to take a new turn and can’t wait to stop for the first player to decide. But this also creates competition between players pursuing sane or insane goals creating a sort of rivalry and energy at the table waiting for the first player to decide.

The only thing which gets my goat (Black, of the Woods of course), is the removal of cards from the deck causing a hunting for treasure effect. For example, if players have taken all the map fragments except one, players end up wondering if it’s still in the deck or if someone has the card in their hand waiting to use it for the alternate effect. If players aren’t also focused on the main board’s play or other areas, they may cycle cards without much progress.

Gates of Delirium offers solid play with some small caveats. It’s an enjoyable combination of highly competitive area control, card play, and set collection. Gates of Delirium serves as a good advanced filler or introductory game for an evening, despite the thin theme, it’s a worthy representative of my otherworldly (Cthulhu) brand.

Final Score: 4 stars – The Cthulhu name gets a good filler in this light game. As long as players are cognizant of how the set collection play affects overall gameplay, they’re sure to enjoy this training in Ancient One follower management.

Misses:
• Game can stall slightly
• Not much depth