We review Garbage Day, a new dexterity game from Mayday Games. In this family friendly card game, players are trying to take out the trash without spilling any of the cards already placed on the Garbage Can. 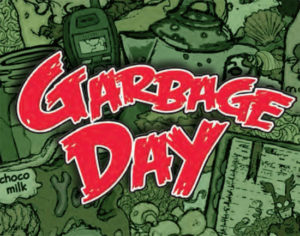 Nobody likes doing chores. It’s even in the name; it’s a “chore” to do. And among chores, taking out the trash has to be one of the worst. It’s smelly, gross and you occasionally get splashed with “garbage water”. Blech.

Despite the unfriendly theme, the designers at Mayday Games decide to pay homage to this ages old chore with their latest dexterity game. Enter Garbage Day. A quick playing, game of skill and coordination, where players must clean out their room and deftly stack cards into the garbage can.

In Garbage Day, players will be placing trash cards onto a trash can, which also doubles as the game “box”. There are no victory points to be earned here, the name of the game survival. You’ll be placing cards into your room, opponent’s room, or onto the can itself. Careful must be taken though, for if you knock too many cards off of the pile, you’re out of the game! Last one left is the winner.

In addition to the plastic garbage can, the only other component is the game cards. The artwork on them has a very odd, cartoonish feel to it. It’s hard to describe, but its gross nature seems to fit the game quite well. The card quality itself is nothing special, but interestingly, each card has two holes punched in them (more on that later).

As with most dexterity games; the game play is fairly simple. Each player starts with a hand of two cards and a room card. The trash can is placed in the middle of the table.

There are a few rules when playing cards onto the trash can:

• One card at a time.
• One hand.
• Cards must be played face up.
• The two holes on the card being played must not be blocked. You must be able to see the table through the holes.
• You may not move cards already on the can.
• You must place cards on top of other cards, not under or in between.

If, during placement, you knock any cards off the trash can, they get placed into the overflow in your room.

After your turn, the next player takes theirs and so on. The last player left in the game is the winner.

I’m a pretty big fan of dexterity games, so I was looking forward to checking out Garbage Day. Despite the repugnant theme, the game is actually quite enjoyable. The rules are very easy to explain and, after a round or two, most players will get it.

When I first opened the game, I didn’t get the point of the holes on the cards. But in practice, it makes perfect sense. The game would be too easy if you could place cards anywhere on the can, so the inclusion of the holes was a genius solution. More than once I was forced to reposition a card due to the holes being blocked. This also ensures that cards placed are hanging off the edge, creating a more perilous trash can as the game plays out.

In addition to being a dexterity game, Garbage Day also includes a healthy dose of “take that”. The “mischief” cards that are played into your opponent’s rooms can be particularly punishing if played at the right moment. Normally I’m not a fan of take that games, but Garbage Day is a casual enough game where we rarely saw a player being ganged up on.

The one thing I wasn’t a huge fan of is the player elimination aspect. This is especially true when you get up to the higher player counts. Unless your players are especially bad at this game, players won’t be eliminated easily.

In most of our games, players rarely knocked off one card or two. Usually we’d build up a large mound on the trash can and eventually a player would knock off about 20 cards. This kicked them out of the game, but also reset the difficultly level. That means that there is another slow ramp up as the cards on the trash can are built up again. It can sometime take an hour for Garbage Day to end. Unfortunately that’s way too long of a play time for this game.

Instead of playing until only one player is left, I think I would have preferred just having one loser. Much in the way Pairs does it, the goal is to not be the first one out. When players got knocked out, after a while they tended to go find other things to do while they waited. For a game as casual as Garbage Day, that’s a miss.

Except for the end game condition, I enjoyed Garbage Day. The dexterity mechanic was fairly unique and the game actually allows for a bit of strategy. Do I try to keep my room as low as possible to avoid emptying it or do I throw high cards in there to try to clean it while the trash can is still fairly empty? I found myself experimenting with both of these strategies during our games. That’s way more strategy than I’ve come to expect from a dexterity game.

If you are a fan of dexterity games, then Garbage Day is worth a look. The take that aspects of the game play isn’t cruel enough to bother even the most softhearted players. The theme in Garbage Day is family friendly, and the game scales well. Just be aware of the player elimination aspect (which can be easily house ruled).

If you’d like to get a copy of Garbage Day, you can pick it up for about $15.

Final Score: 3 Stars – A fun and unique dexterity game that’s held back a bit by its play time and end condition.