We review Galilean Moons, an area control and set collection game published by Fantasy Workhouse. In Galilean Moons, players are trying to earn the most victory points by mining the moons of Jupiter. 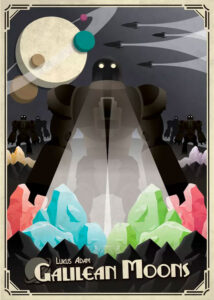 As befits a game with an astronomical title, eager readers will want to know (or may already know) that the Galilean moons (Io, Europa, Ganymede, Callisto) were first observed by Galileo Galilei in 1610 as he observed Jupiter with a telescope. Interestingly enough, the names of the moons come from Simon Marius who observed them one day after Galileo. Galileo and Simon also seem to have been rivals at the time with Galileo describing Simon as a “poisonous reptile” and an “enemy of all mankind.”

Whatever the astro-beef between these two scope-heads was, the name is apt for a game about controlling areas of these four moons to mine them for newly discovered gems of power. Galilean Moons is an area control, set collection game for 1 to 4 players. For the best experience, 3 or 4 players are required.

The game begins with each sector of a moon (4 moons with 4-7 sectors each) receiving a single token representing one of six different resource types of varying rarity. Whenever players wish to take actions (see below) within a sector, they must play command cards of a type matching the sector’s resource. The tokens also represent the colors of gems that can be harvested from the sector.

During a typical turn, players will utilize a hand of 1-8 command cards with suits matching the colors/resources on the board. Additionally, each action requires a number of command cards based on its difficulty. The units for area control are giant robot meeples (similar to the Iron Giant). They’re used for battling and mining depending on the action.

On their turn, players may also establish a base if they control three adjacent sectors. This is helpful to improve defense in case other players are eyeing invasion. The other free action players may take is buying a technology card. There’s a display of three cards to the side of the board, and players can choose to spend gems to purchase them. Their abilities activate once per turn. Part of the overall strategy in the game is purchasing good cards early to maximize their benefit throughout the game.

After the command card deck has been cycled through three times, the game end process begins to give each player an additional turn. The final scoring gives points for area majority control of each moon (based on most sectors controlled), points for gem set collection, points for each technology card purchased, and some points for remaining units, bases controlled, and ruins (destroyed bases) in their supply.

First and foremost, everything in the formula here sounds good. The turn options seem interesting, the options feel like they work, and the progress to victory points feels right. Mechanically, the game functions and the combos to be made by having the right technology cards together.

What could turn off some players is also that the game can be very tactical. Because player options are driven by the cycle of command cards through the deck and what technologies are on offer, players might not be able to pursue a single strategy over the course of consecutive turns. Varying focus between sectors is usually how the game proceeds for each player, trying to amass the right set of command cards to execute actions that are important. And other players will certainly want to hate draft to prevent opponents from being able to execute what they need.

The other functional option missing for this reviewer is area majority competition within a sector. While it’s understandable, it feels like the game lacks some tension driven by the threat of invasion being close. Because a player can invade any sector regardless of adjacency, the operations are more akin to collecting sectors rather than building them up and defending them.

However, the real sigh of exhaustion from this reviewer comes from the lack of theme, or generally, the very lackluster way the theme is implemented. For a lighter weight game with an intriguing theme such as this, some investment could really have gone into additional 1920s or 1930s style art to help bring alive the command cards or the board. The giant robots seem to be only present on the cover. As it is, it’s purely functional with only the palette and font choice to drive the narrative in the game.

Galilean Moons is good. If theme isn’t important to buyers eager for a lighter area control game, Galilean Moons delivers solid gameplay. It isn’t without some minor flaws in execution and some small missed opportunities, especially around implementation of theme, but on the whole it offers a similar feel to an area control version of Ticket to Ride with a little more depth. If players keep focused on their technology card purchases and staying flexible, there’s a good amount to like here.

Final Score: 3.5 Stars – An enjoyable mining trip through the moons of Jupiter as long as players don’t look for the theme too much.