We review Furnace, an auction and economic game published by Hobby World International. In Furnace, players are trying to make the most money buy buying cards and using them to produces resources and money. 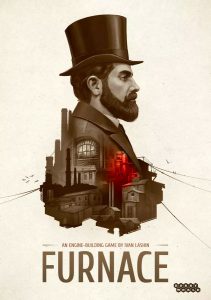 Flashback to 2018. Board game conventions exist (a distant memory, for sure). I’m attending Board Game Geek Con in Dallas, TX. Taking advantage of the vast library of hot new releases, I play Smartphone Inc. And I fall in love with the unique mechanisms and immediately pay about three times the MSRP for a copy that has been imported from Essen. Chastised by my fellow gamers for a perhaps foolish spending of money, it was one of my favorite games of the year and is only very recently making it into retail distribution in the US.

Now it’s 2020. There are no conventions. But the designer of Smartphone Inc, Ivan Lashin, has a new game for us to enjoy. Furnace is another fast-playing economic game. This time it’s built on a unique auctioning mechanism. Unfortunately, it isn’t easy to acquire yet in the US, but let’s find out if it’s worth trying to track down.

In Furnace, players take the role of 19th-century industrialists. As is pretty common among economic games your goal is to make the most money. Each player will start with a company and a capitalist card, giving them a unique ability. And you’ll grow your wealth by purchasing company cards that produce resources, transform resources, or turn resources into money.

Each round, a number of company cards (based on the number of players) will be available for auction. Each player has four bidding discs—numbered one through four. You can place any disc on any available card, but most follow two key rules:

When the auction ends, whoever has the highest numbered disc wins the company card and adds it to their tableau. But all is not lost for the losing bids. Each company card will have compensation at the top of the card, which you get if you bid but don’t win. That compensation could be resources or an ability to transform resources into something else (oil into iron, for example). The compensation you get is multiplied by the disc you used, so if your 3-disc was outbid by someone’s 4, you’ll get 3x the resources or get to perform that transformation 3 times.

After all cards have been awarded, the second phase of the round is the production phase. Each player can activate all of their company cards one time, in any order. Again, all with the aim of making the most money. Each company card is also two-sided (other than your starting company) and can be upgraded to provide additional effects.

Once everyone has activated all their cards the start player passes to the next player, more cards are revealed for auction, and the process repeats. After four rounds, the player with the most money is declared the winner.

I like auction games. I don’t always love them. It depends.

They can be hard to get into for new players. Especially if the game just opens with bidding and new players don’t have any clue what things are actually worth. But in Furnace, you really only have four values to use, so the risk there is pretty limited.

Other auction games suffer from requiring players to math out exactly what something is worth. (I’m looking at you, Modern Art.) But in Furnace, a card that turns oil into money is only good if you also have a way to make oil. And a card that makes oil is worthless without some way to sell it off. Values are different to players and you can never guarantee you are going to get exactly the cards you’ll eventually need.

Auction games that solve those two problems are the ones that I tend to love. (Now I’m looking at you, Ra.) But how many games do you really need? It’s 2020, and pandemic or not we need something to differentiate a game from the pack of Knizia-auction clones that are already sitting on our shelves.

And Furnace brings you the compensation mechanism.

Compensation is the slight twist that makes this game worth getting. You aren’t always bidding to win. Heck, often you are bidding to lose. In the first few games I played, most players would identify the company card they really wanted to win and throw their 4-value disc on it. But maybe you have one of those awesome companies already that convert oil to money, but no oil. And the player before you already used their 4-value on the only oil-producing card. Getting oil as compensation can be just as good. So using a 3-value disc knowing you are going to lose that bid, but in order to maximize your compensation might just be the best play. It also helps even out potential issues with luck of the draw. If you are the last player to bid in a round you may have the last chance to claim a card but you can get more compensation as a result.

The amount of thought that goes into what to bid and when to bid it really makes Furnace stand out. There are a ton of interesting decisions to make and the game can be played in about 30 minutes. I love the focus on efficiency as you’ll need coal, oil, and iron but also need an outlet to make money from all of it. It certainly shares the time-to-depth ratio of Smartphone Inc.

One thing Furnace really needs though—more content. There are 36 company cards and in a four-player game, you will use 32 of them. There are 5 starting companies and capitalists, so in each game, only one isn’t in use. After two games you will have seen literally everything the game has to offer.

There is a variant in which you place newly acquired companies in your tableau on the left or right and then must produce in a chain from left-to-right which ratchets up the intensity a bit. Still would love to see expansion content with more capitalist abilities and more companies. As it is you’ll probably burn out on it after a few plays and it will become an “every now and then” type of game.

There is a reason I opened with a story about Smartphone Inc. While Furnace doesn’t feel at all like a similar game it succeeds in very much the same way. It feels familiar and easy to learn. Plays very quickly. But has enough depth to explore a few different strategies thanks in large part to a unique mechanism. For Smartphone Inc, that was the overlapping action boards. In Furnace, it is the compensation when you close an auction.

While it isn’t easy to acquire in the US, if you live abroad you may be able to find a copy. For those state-side, Arcane Wonders is publishing sometime in 2021. I hope it has a lot of success and we can get a much-needed expansion in the near future!

Final Score: 4 Stars — A great auction-based engine builder. The compensation mechanism adds a lot of depth and interest to the auction rounds.

Hits:
• Lots of depth for a short playing game.
• Compensation mechanism seems simple, but gives players a lot to think about on when to bid.
• Variant to the production round can give you more to explore once you’ve seen everything in the game.