We review Funfair, a theme park building game published by Good Games Publishing. In Funfair, players are building rides and attractions in their very own theme park. 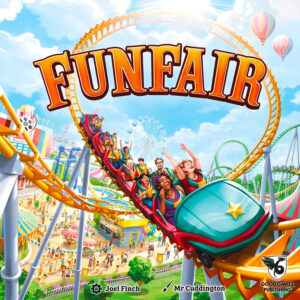 I feel like the last few months I’ve been swimming in copies of board games centered around theme parks. First was the tile-laying game Meeple Land. Then came The Grand Carnival and Danger Park. And today, we have Funfair to check out. If the name sounds familiar, it may be because it’s a follow-up to Good Games Publishing 2017 “take that” game Unfair. With Funfair, they’ve streamlined the gameplay and removed the meanness turning it into an overall quicker and friendlier game. But is it a better game? Let’s find out.

Funfair takes place over 6 rounds, each of which has 4 phases. Each round starts with an event phase, all of which will benefit the players in some way. Then in the park phase, players will take turns completing one action:

Once all players have taken their 3rd action (or 4th if they’ve built their showcase ride), play moves on to the guest step where players earn a dollar for each star on their attractions.

The round finishes with a cleanup step. At the end of the 6th round, the game ends. Players earn points from completed blueprints, coins in hand, staff members, and attractions. Attractions earn points on a sliding scale based on how many icons they have.

I actually played Unfair a few times back what it was released and thought it was a solid game. However, the take that mechanics weren’t a good fit for my group, combined with somewhat lengthy setup/teardown time and it eventually made its way out of my collection. But as I’m a theme park game addict, I was really interested in giving Funfair a chance. And overall, we all enjoyed it.

Funfair is a light game for sure. Your main focus is to build cards with an occasional trip to the blueprint stack. But everything in the gameplay is really streamlined so getting it to the table is a breeze. As there is only one deck (unlike Unfair’s modular one), it’s pretty much just shuffle and play. Even the rules explanation should only take a few minutes.

However, one concern I have with Funfair lies in its replay value. One of the downsides of removing the modular decks is a worry that after enough plays, the variety won’t be there. This is especially true since there seem to be two main routes players go for points: Build a super attraction with lots and lots of icons or collect a few blueprints and try to achieve those goals. Either of those avenues is where the bulk of your points will come from with the super ride being the easier one to achieve in my opinion.

Moving on, one thing I noticed in Funfair is that you get a generous amount of money at the start to get your park going, and then funds become a lot tighter after that. And for me, I consider this a good thing because it allows players to get their feet wet at the start and build a few things here and there. But then players are tasking with some decision-making of where to spend their hard-earned currency each round. This helps make the game fun right out of the game but stops it from staling quickly by flooding the players with income.

I haven’t mentioned the super ride much, but it was an interesting design choice in the game. Each player starts the game with a mega ride to build that costs $20 (expensive in game terms). However, in this version of the game, it gets cheaper by $5 each round. This allows players to wait to build it to save money, but at the expense of losing out on the bonus action it provides for extra rounds.

Overall Good Games did a solid job putting together Funfair. In fact, I really enjoyed the art on the cards and am almost a little saddened that the game requires you to cover up most of the art when you build an upgrade. Obviously, you have to, or the game would be a table hog, but I hated seeing that cool looping element hidden behind my coaster card.

Funfair is a great game that could easily appeal to gamers looking for lighter fare with a fun theme, or even for those looking for a title easy enough to play with their family or non-gamer friends. If you weren’t a fan of the take that in Unfair, then this one is definitely worth checking out. It does replace the higher interaction from Unfair with more of a multiplayer solitaire feel, but that’s not necessarily a bad thing in my opinion. With a playtime of about 30 minutes, the length of Funfair feels spot-on for what you get. I’ve had a good amount of fun with this one and most of my gripes have been fairly minor.

Misses:
• Quick setup and teardown is traded for a lower replay value
• All that art is covered up. 🙁