We review Fuji, a cooperative dice rolling board game. In Fuji, players must work together to escape the erupting volcano with a little bit of dice rolling combined with social deduction. 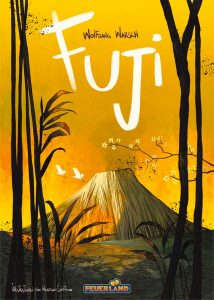 Cherry blossoms and misty blue skies frame towering Fuji. Unfortunately, your expedition chose a bad day to explore the mountainside—the ground shakes and suddenly it’s a race to safety as the sleeping volcano awakens! Get ready work with your fellow players, racing against time to avoid the disaster of the erupting volcano.

Fuji is a cooperative dice game for two to four players that takes about 30-45 minutes to play. It plays best with four players.

In Fuji, players are attempting to reach safety via movement along a series of cards before disaster strikes. Players start with a character card (with a special ability) and several equipment cards based on their character. A scenario card is drawn, and the terrain is built by laying out a path of cards from the volcano to the safety of the village. Players start at the base of the Volcano.

During a round, players will roll dice behind their screen. Then, without revealing what dice they’ve rolled, they’ll discuss who is advancing to what next space. Spaces can only contain one pawn and have a condition listed. When all dice are revealed, you must be the one that fills that condition the best in order to advance. So, for example, if a player wants to advance to the yellow even dice tile, the total of their yellow even dice must be higher than everyone else’s. During each round players can also use items (equipment) to assist with rolls.

Each round the lava will advance at least a single tile, so balancing who is moving where and when is key—if even one player is caught the whole table will lose. If all players make it to the village, you win!

The first thing that struck me was the box art (by Weberson Santiago). Usually, when you see Mt Fuji depicted, it’s an idyllic scene of flowers and blue skies. The arresting yellow and black gives a hint that something is amiss even before you read the box blurb.

There’s a little bit of social deduction here, but not enough to feel frustrating. Players cannot reveal exactly what they’ve rolled in order to choose spaces, but depending on the table that can swing from “Don’t even blink the number” to one of my playthrough’s “I do not have seven-eral of that type but they would form a singing group larger than a duet.” The point is, you can talk so even with broad hints establishing what space is best for whom generally can be determined (though there’s still always the occasional surprise.)

There are several scenario layouts for the ’tiles’, which creates some play variation, but I think it could have used several more. I also really wished the tiles had been actual chipboard and not cards – manipulating them to flip (advance lava) was somewhat annoying and occasionally they’d slide out of place, upsetting the grid layout.

In general, the components seemed a little off – the colored dice didn’t exactly match the color palette of the game, leading me to wonder, why even include colored dice? And the player screens aren’t quite tall enough to obscure a dice roll unless you’re quite some distance from the next player. Like QUITE some distance. Even with poor vision if I glanced at the person on my left, I could usually see half the colors of their pool. The rule book is very easy to follow, has some great example illustrations, and there’s a nice explanation of the equipment cards on the back

Character powers and equipment added some ability to use skills and generally felt like a nice boost. It’s fun to be racing along JUST ahead of destruction and snatch victory from the jaws of defeat by suddenly using a tool to change a dice roll. The only skill I noticed that seemed wonky was the Gatherer character—their skill isn’t directly dice and equipment based like all the others and seemed really out of place.

Overall I enjoyed racing along trying to stave off impending doom in Fuji. There’s just enough balance between danger and movement to get the heart racing and tension mounting, and the social deductiony type “do they or don’t they” isn’t overplayed. Lovely art enhances the theme.

It seems a shame to have to ding it for lackluster components, but they can cause some gameplay issues—is it really a hidden roll if I can see your roll? And spending extra minutes trying to flip and reset the grid pulls you out of the excitement. I’d love to see a ‘deluxe’ version of Fuji with some of these issues fixed as otherwise I really enjoyed this. It is somewhat frustrating to see an otherwise good game let down by a few bits of cardboard.

Final Score: 3 Stars – Fun dice-rolling race style game, particularly for folks that can convey a lot of information with a raised eyebrow. Beautiful art but wonky components take a lot away from gameplay.

Hits:
• Hidden information with the ability to customize to your group
• Beautiful art that enhances the theme