We review Fruit Picking, a farming and set collection board game published by Korea Board Games. In Fruit Picking, players are trying to earn points using a mancala style mechanic to move fruits. 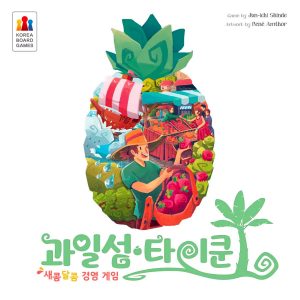 It’s been a while since I got a release from an Asian publisher onto the table! Well, the wait is over and I am super excited to introduce Jun-ichi Shinde’s Fruit Picking to you all. A little bit of research on BGG showed that this is in fact a re-release through another publisher and was originally out in 2014. If you have played that version, you’ll get to see the component changes from Korea Boardgames in my review.

It’s a farming and set collection game with a mancala mechanic for 1-4 players that takes about 30 minutes to play. The best experience is with 2 players to keep game time short but strategic and less like a race.

All players receive a Fruit Island Board, which has seven wells to hold seeds and Farm Cards. The starting player is the one who most recently ate fruit. Their farm Cards are shuffled and randomly placed into each well and all other players will arrange their own board to copy the starting player’s board.

Fruit Picking starts with the starting player and proceed clockwise. A player’s turn consists of 2 phases: Planting Seeds and Using the Active Farm.

When Planting Seeds, the player picks up all the seeds from a Farm Card on their island board and redistributes 1 seed onto the next Farm Card and so on (mancala style) until no more seeds are left in their hand. The last Farm Card that a seed was placed on becomes the “Active Farm”.

Then, when using the Active Farm, the player will choose either to Water Plants or Collect a Market Card.

To Water Plants, the player will take several seeds from storage equal to the number of fruit or raindrops on the Active Farm’s card then add those seeds to the Active Farm.

To Collect a Market Card, as long as the Market Card depicts the same fruit as the player’s Active Farm and they have enough Seeds available in their Harvest House to pay the cost, they can collect the corresponding Market Card. The cost is the total number of fruits depicted on the Market Card plus the position on the board (four positions, from 3 to 0). To pay, all seeds on the Active Farm are returned to Storage and seeds from the Harvest House equal to the cost are also returned to storage. The Market then refills left to right, making older Market Cards more affordable.

Once a player completes any of the Market Card sets shown on the Market Island Board, continue the current round and then the game ends. Whoever completed a set is the winner, and tie breakers are the number of fruit on Market Cards and most seeds on Farm Cards.

Let’s talk about components first, because I am very much in love with the fancy player boards that have inset wells. It’s not as high quality as wooden mancala boards but for this price point, it’s well done. The seeds themselves can be tiny when following through on the mancala mechanics so don’t be afraid to just hold the pile of seeds in one hand and gingerly place them one at a time onto the farms during your turn. The cards are fairly thin and subject to bending and dents so don’t be afraid to sleeve.

During these times, any game that comes with a solo variant is a blessing. I was happy to find that the variant not only makes the game harder but also provides tiers of difficulty to aim for. When it comes to motivation on scoring in solo variants, I have generally preferred to know what the below-average, average, and above-average ranges are so I know whether there is more room for learning. Fruit Picking does this by evaluating your scoring based on how many seeds you have removed from your available storage. The reason why this increases the difficulty is because unlike in the normal gameplay, seeds spent to acquire Market Cards are not returned to storage. Consequently, the mancala mechanic becomes more difficult to work with and planning for Active Farms is not consistent (which I like).

For the base gameplay with 2 or more players, it’s interesting that despite having the same starting setup you can develop wildly different island boards from your opponents. As I mentioned before, being able to learn from a game is valuable so trading notes at the end of the game about starting moves with your opponents can be fun. From there, boards will diverge based on what Market Card set each player is aiming for and really comes down to the luck of the Market Cards drawn. It’s such a bummer when the market stalls and you need to spend several turns just watering plants so you do need to pay a little attention to the progress your opponents are making. However, in my experience with this game, they are also probably spending quite a few turns watering plants too.

That being said the grind of this game can be slightly irritating when the Market Cards do not match up with what is most produced on everyone’s island boards. This forces everyone to start scrambling to pivot and grow different fruit than they intended. Eventually, when someone gets their first market card everyone starts to reevaluate their island board again to determine the likelihood of that player being able to complete a set. From there you rinse and repeat until someone wins.

For the reasons described above, I recommended this game to be two players simply to reduce the amount of whiplash induced by disappearing market cards. I understand that this can limit the chances of purging an unfavorable market but I prefer the chance to aim for something and actually accomplish it. You’re already counting and reverse engineering so much because of the mancala aspects, so to be forced to do that repeatedly is just torture. Don’t do that to yourself.

This game is for those who find joy in mancala but are looking for more challenge in a farming backdrop. If you can get past some of the grind trying to meet market demands and the possible urgency of the race against your opponents, you’ll be playing this solo or with others no problem.

Final Score: 3.5 Stars – Be the first to satisfy the Market Island’s needs for various fruits in this farming and set collection game with variable starting boards and mancala mechanic!

Misses:
• Farming feels like a grind
• Tiresome racing to market cards
• Too random with too many players