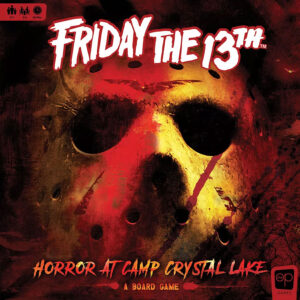 You and your fellow stereotypical teenage friends have decided to take a relaxing trip together to Camp Crystal Lake. What could go wrong? Well, maybe a murderous psycho killer is on the loose, that’s what. So, you’ll have to try to gather supplies but avoid the hockey-mask clad Jason Vorhees and survive five nights before help arrives.

So, let’s dive into the world of campy horror movies with Friday the 13th and see how it translates into a press your luck game for 3-6 of your soon to be hunted friends.

The premise of Friday the 13th is pretty simple. Each player takes the role of one of the trope-y horror characters (the jock, the nerd, etc…) and ventures out of the safety of their cabin to gather supplies. They try to return to the cabin before Jason finds them and forces them to run back without anything useful.

In practice that means most of your turns you’ll draw a chip from a cloth bag. It can be one of the six types of supplies or it may be a red Jason token. If you draw two Jason tokens your round ends and you return with nothing. Alternatively, you can choose to voluntarily return to camp with whatever supplies you’ve gathered so far.

There are a few things to mix up the strategy though. First, everyone starts the game with 5 fear cards and instead of drawing a disc you can play a card from your hand. These have a wide range of effects but generally will mess with the other players or give you additional supplies without the normal amount of risk.

When you return to camp with supplies you’ll earn points based on the supplies, you have—some are worth more than others. There is also a card each round that will earn you bonus points if you are the first person to return with the requested items. Additionally, the players who stay out the longest will earn a bravery bonus that gives them additional points.

After the fifth night, the player with the most points wins.

If anything in the gameplay overview sounds familiar, it may be because you played Quartz. A game about dwarfs mining for various gems. What could dwarven mines and horror movies have in common though? Well, apparently everything. This game is almost a shot-for-shot remake. There are a few differences between the fear cards and the bravery bonus mechanism. And of course, everything in the Friday the 13th version is covered in blood spatter.

Taken alone, Friday the 13th is a pretty good game. I tend to like press-your-luck games. The take-that element of the fear cards can be fun so long as people aren’t taking the gameplay too seriously. The addition of critical supply cards, which are essentially recipes where you get bonus points if you are the first one back with those supplies, adds another layer to the “when do I come back?” equation.

But what drew me to this game was obviously the theme. Battling for your life against a deranged killer is quite the stakes for pushing your luck.

Unfortunately, instead, we are collecting pans and flashlights. Shouldn’t we be trying to escape? Why are we hiding in the cabin to begin with? And why can’t Jason get in here? Why does he give up after 5 days?

Maybe finding plot holes in a light horror-themed game isn’t fair. The point is really the lack of creativity put in place here taking advantage of a great license to make a game that really creates tension and memorable moments. Getting scared out in the woods and dropping the pan and ax you found isn’t exactly the stuff horror movie scenes are made of.

Reskinning an existing game with a licensed property isn’t necessarily a bad idea. Quartz is a solid game and press-your-luck makes a lot of sense for a world where you are trying to fight for your own survival. Friday the 13th: Horror at Camp Crystal Lake even improves on the Quartz game with better bravery bonus mechanisms and critical supply cards.

A little more creativity would have went a long way to really making this a game to recommend though. No special powers for the different characters. The critical supply cards don’t even have a name that tries to tie them into the theme. And instead of fighting off Jason and trying to survive the theme of the game is basically “don’t get too scared.” Overall, there is just way more that could have been done here.

If you want a press-your-luck game, Friday the 13th: Horror at Camp Crystal Lake is fine, but there are better ones. Looking for a great horror experience you’ll likely be disappointed.

Final Score: 3 Stars – A good press-your-luck game but it doesn’t do justice to its source material.

Misses:
• Doesn’t feel enough like Friday the 13th, could really use more love from the license to make it stand out.