We review the card game Friday. Friday is a solo, deck building game that plays in about 20 minutes. Is Friday worth your time or does it deserve to be banished to a desert island. Read on to find out. 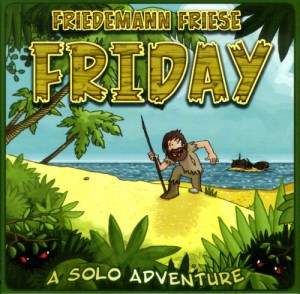 If you were stuck on a desert island, what would it take for you survive? Would you have the necessary skills to combat all the native dangers? What about when the pirates finally attack, will you be ready? These are the questions Rio Grande Games hopes to answer in their solo deck building game: Friday. Inspired by the old Robinson Caruso tale, you take on the role of Friday, trying to make sure Robinson learns how to survive on the island. Is playing a game of Friday an island paradise or does it deserve to walk the plank? Read on to find out!
Friday is a deck building card game for 1 player and plays in about 20-25 minutes.

Friday is a deck building game. For those unfamiliar with the concept, the game revolves around building your play deck as the game progresses (read our review of Dominion for a great entry to this genre). While playing Friday you are trying to add good cards to your deck, while also trying to trash the bad ones. Each round you fight danger cards and, if defeated, get to add them to your deck in the form of upgraded play cards. Fail to overcome the challenge and you will lose your valuable life points. Lose them all and it’s game over. Survive 3 rounds of increasing difficulty to take on the pirates. Beat them both and you win.

Friday actually has a decent amount of components in its small box. As excepted, there is a large quantity of cards. There are various cards that will eventually be worked into your play deck, all with a tropical island theme. The artwork on the cards work fine, but is nothing special. Personally, I found the artwork a little goofy, but not so much as to detract from the game. But it’s nothing that will help sell you on the game.
Along with the cards, you also get a trio of play boards to help keep your game organized during play. Also in the little box are 22 life token made out of wood. Considering the size and price point, I was pleasantly surprised with what came with Friday.

Friday is played over 4 rounds, each more difficult than the previous. Once you have your setup complete, it’s time to play.
Each turn you draw 2 cards from the danger deck, choose one to fight and discard the other. This is actually a harder choice than appears. While it may seem logical to always choose the easier challenge, the card you discard will appear in a later round with a harder difficulty. Discard too many of these and your later rounds will be very hard to win.
Once you’ve chosen your danger card, you draw a specified number of cards from your play deck. If your fight value equals or beats the danger value, you win the combat and take the danger card into you play deck’s discard pile. Each danger card is divided into two halves, you will use the other half when drawn from your play deck. Most of these cards will also have special abilities that will greatly help you in combat.
If you don’t beat the card, you can spend life points to draw more cards. One life per card. Or, you can chose to fail the danger. In which case you must lose life equal to the difference in your fight score vs the danger value. The benefit is that for each life lost this way, you can remove a card from your play deck (of the ones played in that fight). This is the main way to remove those crappy negative value cards.
Play continues along these lines until the danger deck is depleted. Once it is, it’s reshuffled and the next round commences. However this time, the challenges get harder. Once you make it past the 3rd round, you fight a pair of pirates. Beat them and you win. If you ever run out of life, you lose.

It’s a bit odd playing a solo game. I’ve always been a big fan of board games because I really enjoy the social experience they bring. But sometimes you just can’t get another person to the table. I own quite a few games that can be played with only 1 player, but they are really meant for more. Friday is the first game I’ve owned that is truly a solo game.

But does Friday offer a satisfying game experience for someone who is used to the social aspect? I’d say it does. I will never choose to play Friday over a game with another person, but when it’s just me, it’s a great option to have. Friday ends up being a quite enjoyable card game that offers a good challenge to the player.
And challenges you will have. Most cooperative games are hard, but Friday will sit right with some of the big boys in terms of difficulty. I think, on average, I win about 20% of the time. I had to play about 5 times before I even got my first victory. But when it came, it was intensely satisfying. Friday offers different difficulty levels for once you become more skilled in the game, but I’m still plugging away at the easiest.

For a solo game, I was pleasantly surprised as to how much fun Friday is. The game play flows really well and once you get all the special action terms down, you can get through a game in 20 minutes. Because the game is so challenging, I find myself immediately playing again after a close loss. Friday is a game where you can almost feel it taunting you when you lose.
So yes, Friday is fun, quick and a good challenge. It’s great for those evenings when you have some time to kill, but I don’t see anyone wanting to play this over a traditional board game with another player. And that’s OK. Friday checks in at under $20, so you won’t feel guilty if you only get to play this hidden gem every once in a while.

There are not too many games on the market right now that are strictly for one player. While board gaming will always be a social form of entertainment, it’s nice to have options when you just can’t get people together.
In a crowded deck building market, I think Friday does a great job distinguishing itself from the competition. You will be hard pressed to find a similar game on the market. It also helps that it’s price point puts it in a spot that makes it an easy buy. I’d have a hard time spending $40 on a game I’m only going to play once in a while when I can’t find other people. But for under $20, you get a lot of value for your money. The high difficulty also adds in a decent amount of replay value.
Quick, easy-to-learn game play and hard challenges means Friday will be a permanent staple in my board game collection. Do yourself a favor and pick up this little gem today.

If you are interested in getting a copy for yourself, it’s about $16.

Final Score: 4 Stars – You’d be hard pressed to find a better solo game on the market. For what it is, it works fantastically.

Misses:
• Only 1 player can play
• Artwork is somewhat goofy