We review Fort, a card drafting and engine building game published by Leder Games. In Fort, players are racing to be the first player to earn 25 victory points by drafting cards and using them to build their fort. 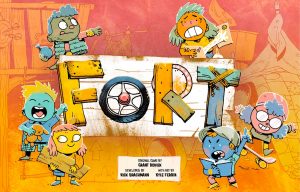 “Here. Review this,” whispered Tony… from behind a tree. He peeked out, holding a copy of Fort in his hand. The other held a Super Soaker.

“SHHHHHHH. I am building a secret Fort!!”

I blinked. Then I understood. “I get it. You are building a fort. You just gave me Fort.”

He just stared at me.

“You know. Fort made you want to relive your childhood.”

I hesitated, wanting to say something, but decide to simply take my Fort and go home.

Fort is a deckbuilding game for two to four gamers that want to build their own forts and be the king/queen of their neighborhood. Games can take between 20 to 60 minutes. For this review, I played games with all player counts.

A game lasts a variable number of turns, with each player taking their turn until the game ends. Each turn consists of five phases:

The game ends immediately when either a player has 25 points, builds a level five fort, or the Park deck is empty. After end game scoring is completed, the player with the most points is crowned the winner!

Let’s start with the game mechanisms. They tie in almost perfectly with the theme: kids building forts. Kids need to work well together to build a good fort. When you play a card, aka play with your friend, you get to perform either their private action, their public action, or both. This allows you to perform various actions, such as collect resources (Toys and Pizza, needed to build forts), score points, store resources in your pack for later use, and improve your fort, among others. Almost every card belongs to one of six kid-themed suits (one kid has two suits). When you play a card with a “per” action, you are allowed to play additional cards with the same suit from your hand to boost that action. Kids playing with other kids.

Once you complete your action(s), your opponents can Follow your public action by discarding a card matching the suit you played. Kids will copy kids. My wife is a teacher. Just ask her. As a side note, the Following mechanism, while not unique to Fort, keeps every player engaged because they have the possibility of performing an action when it is not their turn.

So why is this important? What happens when you ignore your friends, both in real life and in the world of Fort? They look for other friends to play with. The Yard is where all unplayed cards must go (except your two best friends, aka your two starting cards) at the end of your turn.

This brings us to the most loved (or hated) mechanism of Fort. Recruiting. When other players Recruit, they can take any kid from your Yard, thematically representing them being invited over to play. If you have read my reviews in the past, I usually hate direct conflict. I LOVE Recruiting in Fort. It is so closely tied to the theme and, because everyone can do it every turn, it did not bother me at all. It encourages increased player interaction in a genre, deck building, that is usually lacking that.

Boosting actions, Following, and Recruiting are the three mechanisms that drive tough decisions throughout the game. Do you want to play several cards from the same suit so your opponents cannot Recruit them from you? Or do you want to play a different card to score points, knowing that you risk losing cards that are needed for a combo you built during the game? These are the decisions I loved mulling over, turn after turn.

I also liked how fast the game played, especially once all players were familiar with the game. Turns fly, everyone is engaged, forts are improved, and then suddenly the game is over. Similar to other deck builders, the key is to decide when to move from building your engine to scoring points or, in Fort’s case, improving your fort.

Finally, the art brought the whole package together. The cards, the player boards, the scoring track, and the tokens are fantastic. Each kid looks unique (there are duplicates of some cards). They look like they are using their imagination to come up with the most fantastic of forts using the most pedestrian of components.

So, what did I not enjoy? When your fort reaches the first and second levels, you can choose a made-up rule (unique, hidden scoring opportunity) and perk (unique special ability), respectively, from those that are available. These bonuses are included to improve replay value so that there are other factors influencing the game besides the cards. Unfortunately, almost everyone I played with felt these were unbalanced, with some options being clearly superior to others. I know this game was playtested WAY more than I played it; however, when a player reveals their perk or scoring card and the group collectively groans, I think there might be an issue.

Also, after repeated plays, the game started to feel repetitive. Maybe if we found the made-up rules and perks more exciting it would have helped. I have played the game 15 times now. For games I truly love, I find I want to play the game MORE the more often I play it. I did not feel that way with Fort. It does not have the longevity I expect from deck building games.

I absolutely loved Fort the first time I played it. The unique design. The art. The decisions. The short playing time. Unfortunately, the shine started to wear after multiple plays. Some of the Perks and Made Up Rules seemed unbalanced to my group. Unfortunately, the replay value these two mechanisms were supposed to generate simply did not pan out. I found myself wanting to play the game less after 10+ plays. That does not mean Fort would not be a good game for you, it just simply lost its luster for me. That being said, I would happily recommend any gamer that likes deck builders or unique designs at least play the game once. Fort is definitely worth experiencing!

Final Score:  3.5 Stars – A different type of deck builder that is definitely worth experiencing

Misses:
• Perks and Made Up Rules feel unbalanced
• Can feel repetitive from game to game