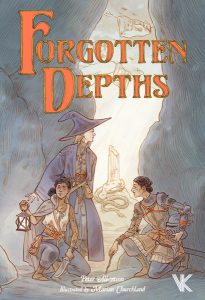 The term “dungeon crawl” has become so embedded in game culture that it has its own Wikipedia page. Either through a tabletop role-playing game, a space-hogging board game, or a first-person-shooter style video game, the concept of a person or group delving into an unknown maze in search of adventure, danger, and valuables is ubiquitous. You can find any genre or theme expressed across the wide landscape of the gaming world that your heart desires, with a variety of mechanics and gameplay options to keep things fresh.

Forgotten Depths from Void Knight Games seeks to explore some new spaces in the dungeon crawl expanse, so let’s see what treasures we can uncover as we delve inside…

In Forgotten Depths, you take on the role of adventurers descending into an ancient dungeon that contains an unknown evil that has risen from its slumber. The heroes, representing the standard fantasy archetypes of the fighter, wizard, and rogue, each have their own unique powers and abilities that will assist them on their journey as they encounter deadly monsters, vicious traps, and untold rewards.

The dungeon is represented and built through the placement of tiles during the Exploring Phase. The goal of the party is to find the exit down to the next level, which is located somewhere near the bottom of the dungeon tile stack. As players draw map tiles, they develop the layout of the dungeon by placing them next to already-placed tiles, so long as all edges of the new tile match up, and a path can be traced from their current location to the new tile. On each tile, various obstacles may block the path of the adventurers, whether they are monsters, doors, chests, or other features of the dungeon. If players cannot place a tile, the game ends with a player loss, so they must work to pass through the obstacles to keep open paths.

In order to achieve this goal, the party enters the Encountering Phase. Doors must be unlocked with keys, or through player abilities or special items the party may possess. Stumbling upon a chest or a feature may provide the party with a helpful boon, and finding a campfire gives the party a place to rest. Some tiles are marked with runes that, when connected in different patterns based on tile position, can reveal a legendary location that provides the players with even more powerful abilities and magic items. If the party’s path is blocked by a monster, combat is instigated to defeat them and clear the path.

Combat in Forgotten Depths is resolved through the playing of combat cards of varying strengths. The values of combat cards of the player and monster are compared, with the higher value scoring a direct hit, but the lower value still dealing damage in the form of the difference between the two cards. Each monster has a certain number of times it must be defeated (representing a pair or group of monsters), with the number of combat cards played changing as the defeats start to rack up. Once all the monsters have been defeated, the path is cleared for players to continue exploring.

As players defeat monsters and overcome obstacles, they earn experience points, which can be used to level their characters up, gaining new abilities and higher hit points. Once players find the end of the dungeon level, they face the boss monster who is more powerful and deadly. Once players get to the bottom of the third dungeon, they have successfully defeated the evil and are declared the winners!

While there are plenty of dungeon crawl games out there, we found ourselves intrigued by the idea of building a dungeon through tile-laying as we explored. Forgotten Depths successfully combines a basic dungeon crawler with a tile-laying mechanic that adds quite a bit of strategy as to how you place the tiles and how you proceed. Much like in Carcassonne, there is quite a bit to think about as you place tiles, in order to ensure that you are not creating a blank space where you cannot place a tile, or blocking yourself off from making any move at all, which effectively loses the game for you. Having to think in terms of the current dungeon state and keeping future paths open definitely can provide a bit of a brain burn.

Another neat addition to the tile-laying aspect is the creation of the legendary locations, which require you to line up runes on tiles in a certain pattern in order to unlock the power and items. There are a variety of arrangements on each level, with more complex patterns granting even more powerful rewards. This pattern matching adds another element of interest to the dungeon-building mechanic.

Combat is relatively straightforward, with monsters predictably becoming more challenging as you delve deeper into the dungeon. The combat mechanic requires some elements of tactics, since once you play a combat card it sits unavailable until after you have rested, which also allows the monsters to repopulate and block your path. The addition of special “power cards” for both monsters and players give some added variation to what could just be a simple card-drawing affair.

Forgotten Depths gives a nice twist on a classic dungeon crawl with a unique tile-laying mechanic that provides a good amount of strategy and brain-burn for any gaming group. While the theme tends to stick to traditional fantasy tropes, we still enjoyed it, per usual. Combat is straightforward and easy to understand after a few rounds.

Forgotten Depths launched today on Kickstarter. So head over to the campaign page for more information, or to become a backer.