We review Forbidden Sky, the newest entry in the Forbidden Series from publisher Gamewright Games. In Forbidden Sky, players are trying to assemble a rocket to escape teh platform before the lightning takes them out. 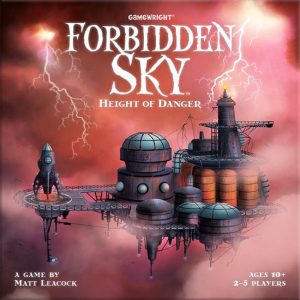 First your team of explorers landed on an island that was sinking into the waters. Next, you were stuck in the shifting sands of a desert. Now the party finds itself on a floating platform high above the earth in the midst of a raging electrical storm.

Seriously, your adventuring group has terrible luck when it comes to exploration. Maybe you all need to go to an ice cream parlor next time…

From the makers of Forbidden Desert and Forbidden Island comes Forbidden Sky, a co-operative game for 2-5 players that plays in about 45 mins. It plays best with 3-4 players.

The object of Forbidden Sky is to complete a power circuit through ‘transformers’ to power the rocket that will lift them off the platform.

The map will be built as you go, with each player having the option to add more to the platform as one of their four actions. The other actions consist of moving around the board, drawing more platform tiles, or attaching wire to complete the circuit.

At the end of a player’s turn, storm cards are drawn. These negative effects include:

The game is over once the circuit is completed and the rocket takes off, or if one of the players die. Players win if they all manage to make it off the platform. Players lose if anyone dies before they can complete the circuit, if the storm reaches maximum intensity, or if the rocket leaves anyone behind.

The Forbidden series has been a solid experience for those that like co-operative games. Forbidden Desert took a leap forward from Forbidden Island by taking away the ability for a turn one loss, as well as varying the special ability cards so that seemed more interesting. Is Forbidden Sky another leap forward for the series? Not really.

A lot of the same mechanics are here. Avoiding the sun has just become avoiding lightning strikes. While you won’t be digging through sand, trying get anywhere with the wind blowing you in the opposite direction is just as frustrating. The adventurers continue to boast similar powers (so seasoned players can immediately start building out dream teams) and attempting to ensure connections are the proper distance with limited tile hands is just as groan inducing.

Is it perfect? No. Is it another fun entry for folks that enjoyed Forbidden Desert or Island? Absolutely. Building out the rocket ship is an interesting twist on the ‘seek and bring back’ of the last couple games. It could additionally appeal to kids just learning about electronics as I understand that once its built, the rocket should light up—mine, alas, did not.

My biggest complaint about the games still exists – this is an easy game for one or two players to really alpha up. I’m not keen on games that have decision making by committee as inevitably these with some sort of ‘timer’ become less about discussion and more about who can shout out the more ‘optimal’ plan. Unfortunately, this remains the same in Forbidden Sky.

Ultimately, I think players that enjoyed the first two games will find this a fun twist on a familiar formula. Those that aren’t keen on co-op (or really need pieces to fit together properly) should probably give it a pass.

Forbidden Sky offers a new twist on the Forbidden formula with a new chassis but not much new under the hood. Players of Forbidden Island and Forbidden Desert will be able to jump right in. Forbidden Sky still suffers from alpha-itis. Circuit building could potentially be interesting to kids if the bits all work. (And they aren’t too finicky about how they fit.)

Final Score: 3 Stars – Fine for countdown loving co-op players, not so much for anyone looking for something new.

Hits:
• Making instead of searching is a fun twist on the Forbidden formula.
• Potential to appeal to kids who like learning to build.

Misses:
• Not the game you want to pull out with your alpha brother in law at the table.
• Not different enough from Fobidden Desert that it seems like you’d keep both on the shelf.
• I wish my rocket had lit up 🙁