Home Game Reviews For Glory Review
Review of: For Glory

We review For Glory, a deck-building and dueling game published by Spielcraft Games. In For Glory, players are recruiting gladiators and fighting it out in an arena, seeking glory for their patrons. 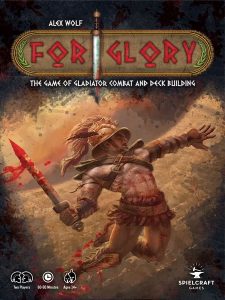 The modern world may see itself as far removed from the spectacles of ancient Rome when husky warriors clashed on the Colosseum floor to the delight of cheering fans. The fact is that our modern temples to sport exceed the ancient Romans in grandeur and significance. The amount of money in professional sports as well as the attention it gathers across the globe in local and international matches reveals just how much we care about the epic of staged conflict.

So, just as modern gamers love to find ways to mangle professional sports into board games, so too will a game designer and/or publisher find the angle to craft a game about the original gridiron conflict: gladiators in an arena dueling For Glory. The next game up is publisher Spielcraft Games’ first production. It’s a two-player game that clocks in at a satisfying 60-90 minutes depending on how close in score players are. Is it worthy of laurel wreaths or gold coins thrown at its feet? Let’s take a look.

For Glory is billed as a deck building game. Seasoned card flingers will recognize the mechanisms of deck cycling, playing cards for money, and taking various actions with the dealt hand of cards. The twist in this iteration is the two-phased approach to gameplay. For Glory begins each round with a Machinations Phase and then switches to an Arena Phase. The Machinations Phase is there to let players build up their contenders and support infrastructure while the Arena Phase basically executes on the plan allowing players to experience the arena battles.

The cards players will be using to build decks come in 4 main types:
• Income – These are straightforward cards that generate in-turn money for the player.
• Patrons – Investors which provide the support for gladiators are the Patron cards. Some warriors need extra resources and the patrons represent the provision of that. They also act as a balancing mechanism for some of the more powerful cards in the game.
• Gladiators – The heart of the game are these cards. Each represents a single warrior assigned to do battle in an arena.
• Scheme / Tactics – These cards represent assisting actions during the Machinations and Arena phases respectively. Players can think of these like “Sorcery” cards in Magic the Gathering. They take effect and the card leaves play. During the Machinations Phase, the effects primarily generate money or card selection abilities. In the Arena Phase, these represent maneuvers to attack the opponent, enhance defense, or even heal.

In addition to the different card types, the play structure between the Machinations Phase and the Arena Phase is also different. When machinating (definitely a thing in ancient Rome), players are playing a game similar to most deck building games. The cards available for purchase are grouped into separate decks by card type, making it easy to form an overall deck strategy. Three cards from each deck make a market and are replenished after each turn. Meanwhile, the Arena Phase is a phase with a static hand where the players allocate their gladiators to battles and use card play to affect the outcomes of a series of engagements with attacks made and damage dealt.

All of this moves toward the main goal which is for one player to have their gladiators be the last ones standing in an arena. Each round, there are two potential arenas for combat: the “Lasting Glory” arena and the “Fleeting Glory” arena. The former gives 1 Glory token while the latter gives 2. The catch is that winning in a Lasting Glory arena also awards a “Boast” card. While it is funny to play these cards and speak the flavor text, in game terms they do nothing. Once one player has 6 Glory tokens from arena victories, they win the game while the loser, according to the rules, will be forgotten.

It’s not uncommon for game reviewers to sit down and learn a game from the rules. Some fairly complex games will need a complete rules read-through before play, but at other more head-scratching times a game throws curves in the middle of what seemed to be a fairly straightforward play formula. Such is the case with For Glory. Depending on how readers like their deck building, this will be a welcome twist or an aggravation of unnecessary complexity.

The conceit of most deck builders is that they ask for card reuse in an engine type metaphor. The repetitive card play generates the optimization and edge that one player has over an opponent. In For Glory, the Machinations phase acts like this. The engine mechanisms with temporal money fuel a sense of urgency of purpose while making choices. Since players are also strategizing which gladiators to put in which arenas, they might also hesitate on allocation and see what an opponent wants to do first. There is also a mechanism to set aside cards from hand, but this comes at a cost. Overall, the excitement in the planning is clearly there.

Now, when the game shifts to the Arena Phase, it feels jarring. Players must now focus on a game where tactical attacks are made in just the right order to defeat opponents. Here the game feels very reminiscent of a game of Magic the Gathering in miniature. The cards attack and defend, taking damage and activating certain effects. However, much of the time, the effects here feel appropriate for a magical battle game and not a gritty hand-to-hand combat. There are even some cards that affect all combatants in an arena. When these are played, it feels like the theme goes right out the window, not to mention the fact that each player could field a gladiator who is seemingly the same person (non-unique names).

Where this specifically breaks the flow of play is in those first few plays when a player realizes the uber abilities of certain gladiators. When activated, the slack-jawed opponent has nothing to say but “That can’t be right.” In a game like this, it would be wrong to totally balance all the gladiators for strength, defense, and activated abilities, but sometimes, a particularly strong character can dominate a game and a flat-footed opponent is unable to react.

Luckily, the game is not tremendously long, and players will learn fast how different gladiators available for purchase can affect play. There is also a specific card that clears a market in case a player really wants to deny certain cards. All in all, this is a game that evaluates not only how well players know their own decks, but how well they know what gladiators and tactics an opponent will use.

It might be unclear from the meat of this review, but For Glory is a solid game. It has a unique mixture of game mechanisms that lets players who are fans of deck building and tactical combat flex their mental calculations in a new way. However, this reviewer feels that the gladiator theme is ill-suited to the card effects given how powerful they can be. The mechanisms are clearly crafted with attention to balanced effects, but it’s also not uncommon for players new to this mixture to completely miss the power of what this can do. It’s not enough to have a strategy for building a strong engine. To do well, players will need to have a focus on how to get that power to succeed in battle.

Final Score: 3.5 Stars – An exceptional mixture of deck building and card tactics, but feels like the theme could use some alteration given the nature of some card abilities.