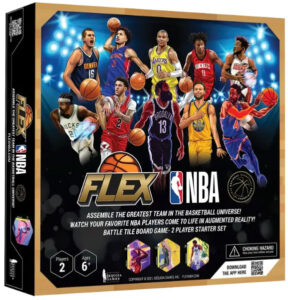 Basketball can be exhilarating with fast-paced, back-and-forth action. In video games, it was faithfully recreated in the EA Sports series and, far less faithfully but spectacularly, in NBA Jam. There haven’t been many widely available modern basketball board games and, like hockey, it’s a tough sport to find the balance between simulation and fun.

My first impression of Flex NBA was that the AR animations of the players was a cool gimmick and was curious how that would translate into the overall gameplay. Was this going to be like Trick Shot or Breakaway Football for basketball in being a great translation of a fast-paced game? Let’s hit the hardwood with Kurtis Blow ‘cause we’re playing basketball.

Each team can be comprised of up to 10 FX tiles and 10 individual basic player Flexagons plus any higher tier versions of those players. Five players start the game and your bench makes up the rest. In the set provided by Sequoia Games, there were a total of 11 tiles, so I opted to draft teams and FX tiles with my opponent and start with 3 players on the court and two others on the bench. That 11th tile, much like Skee-lo, was put aside and just kicked a rock while quietly complaining about never being picked.

The goal of this game is to reduce your opponent’s active players’ Confidence Points (CP) to zero like a basketball-themed ‘Yo Mama’ battle. Or Scottie Pippen telling Karl Malone the mailman doesn’t deliver on Sunday.

There are six steps to each player’s turn starting with

Some flexes allow you to roll the orange ball die to do additional damage or put a status condition on the defender or other players. The five different statuses are dazzled (stun, loss of CP), schooled (DOT/bleed), shook (can’t flex or be subbed), overmatched (loss of CP and is automatically the target of future flexes), and ice cold (can’t flex, be subbed, and must be the target of future flexes).

FX tiles allow for special actions such as healing CP, allowing a substitution, or taunting an opponent.

First team to have no active players on the court loses.

What about the AR? It doesn’t affect the gameplay. With the tiles I was provided, it just creates an animation of the players standing, waving, and clapping occasionally. So it’s a neat and cool idea but it’s ancillary to the whole game’s experience.

And while I expected a sports game akin to NBA Live it’s closer to Mortal Kombat with more flexing than a Mr./Ms. Universe pageant. Flex NBA is an abstracted dueling game, unlike Unmatched, and a lot like Magic: the Gathering including in the random draw aspect of blind buying packs hoping to get better tiles. And while I personally try to avoid games with this type of business model, the dopamine rush of opening packs and getting that rare tile is probably part of the game’s allure. Financially, it’s not that different from buying models for Warhammer or decks of Magic cards and especially in the case of the latter—the more money you spend, the better your team is going to be.

There is an easy mode but it felt like a random war of attrition where you roll to hit and calculate damage, which might be the right fit for younger or inexperienced gamers but, in basketball terms, it was air-balling a dunk in my one play of it.

But as I read and played the advanced mode, I started to appreciate this game. It’s quite good and has more depth than you might think at a passing glance. Player experience and specifically their memory matters to defend with someone their flexing opponent is soft against. The status effects and player types will be familiar to fans of RPGs, MMOs, and other dueling games although with some new basketball-themed names. Team construction, including the FX tiles, is also a large part of a team’s success.

A few of the players I had worked well together with flexes that triggered taunts and others that triggered healing abilities forcing my opponent to whittle down my 80 CP tank, which protected my more offensive and fragile players. This type of synergy between players was something I missed in my first few plays but once it clicked I started to see how this game could be awesome with more flexagons to play with.

Strategy is great but luck can swing this game with both the action and ball dice. Unlocking abilities can be a surefire way to win but you also have to hit your target with some flexes requiring extra ball die rolls so picking a lesser ability that always hits may be a better path if you are the type of person who hates dice.

Finally, I do have a few qualms with the overall game production. The box didn’t contain printed rules (you can download them here). Some statuses are tracked by rotating the flexagon’s position, while others are tracked with tokens and there’s nothing for tracking which abilities have been unlocked. Tokens for all the statuses and for tracking unlocks would’ve been nice and a clean way of presenting critical game information.

I’m team LCG in the battle between LCGs and CCGs and my final score reflects that bias. If you’re a huge NBA fan and a fan of dueling games, this could be your jam. The production missteps in Flex NBA partially overshadowed a fun dueling game and a far better one than I was expecting, especially after my first play on Easy mode. Ultimately, this isn’t a game where the core box provides you with all the content you’ll ever need. But for those who want to buy more of it, they’re likely to find a deeper gaming experience.

Final Score: 3 Stars – Beneath the AR and cool-looking art, Flex NBA is a solid dueling game with a lot of potential for those willing to take a deeper dive into the product line.

Misses:
• Not provided with tokens for each status or tracking unlocks
• Power mismatches possible depending on how much you’ve spent on expansions compared to your opponent
• The AR, while cool, didn’t really do anything