We review Flash 8, a real time board game published by Scorpion Masqué. In Flash 8, players are racing to match a puzzle card as quickly as they can. 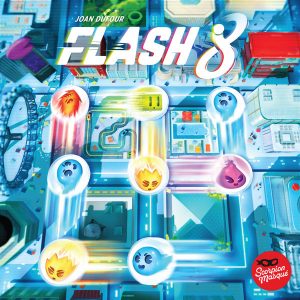 I first got to try this game out at PAX Unplugged, and let me tell you I haven’t been disappointed by a Le Scorpion Masqué release yet. So, when we were given the opportunity to write about it, of course I jumped on it!

Flash 8 is a real-time puzzle game for 1 to 4 players that takes about 15 minutes to play. The best experience is with 3 players for more options and better competitive atmosphere.

Setup is incredibly easy. Each player gets a tablet with a specific number of electron disks and stacks of 10 cards are placed in the middle of the table equal to the number of players (e.g. if you have 3 players, three stacks of ten cards each are placed for a total of thirty). The cards depict configurations you must get your tablet to mirror and are also the game timer. The game rules state that “you must always reproduce the configuration on your board according to your position” so you don’t need to do any mind tricks in real time.

From there, all players play at the same time, trying to match configurations on the cards as quickly as possible. Each card is one point unless it has the double star seal in the corner of the card. If you believe you have matched a card, you simply say “Flash” to pause gameplay and have opponents confirm your work. Once confirmed, you take the card—which reveals a new configuration underneath it—and gameplay resumes immediately.

The game ends when there are no cards left on the table.

This doesn’t have to do with gameplay but I did want to note that it was really satisfying to sticker the game pieces myself. It has been a while since I have had to do any stickering for a game, and the plastic disks that sit in the player tablets are inset to house the sticker. Carefully placing those stickers in the middle was a great start.

With regards to actual gameplay, if you cannot handle both the real time aspect of this game and the potential hit to your ego, this game may not be for you. For everyone else, including myself, it was loads of fun. Every time I missed out on fulfilling a configuration on a card, my mind immediately went to “How can I do this faster?” and I honestly got better over time. I wasn’t too great at slide puzzles growing up but seeing how fast one could set them to a specific state motivated me to understand techniques.

The potential to understand techniques also holds true in the solo variant included with the game. There are no extra pieces or significant setup required, and there isn’t an AI to have to maintain. It’s just you versus the deck of cards, going as slow or as fast as you can manage. The beauty of this is in the opportunity to slow things down to your own literal pace and to ease the tension of the real time component to the game. Scoring is dependent on prioritization rather than probability, so it keeps the game fresh when you’re not able to get another person to the table.

To be fair, sometimes you can stumble into a configuration and just automatically qualify to take the corresponding card. There is nothing in the rules saying that this wasn’t allowed and I felt a little awkward taking two cards in a row when this happened. However, points are points and if it doesn’t say you can’t… well, just do it.

Despite all this, I do have a couple of complaints. The game timer setup is such that this could go on forever if no one is good at this type of puzzle. Since the timer is dependent on folks actually matching configurations on cards, that means the timer is also assuming that the players are capable enough to do it. While I like the vote of confidence, I am personally pretty slow at this game on average despite some solid wins. I would also rather have a standard setup than luck into fulfillment. “Place your 8 electrons randomly on your tablet” could mean failure or could mean success. It doesn’t make sense to me that we wouldn’t all start the same and have the playing field leveled.

Flash 8 is for those who enjoy competitive puzzling and like the thrill of a race. If you can ensure that your opponents are about the same level as you, this game goes by quickly and you learn a lot. However, if you’re not fortunate enough to have even competition, Flash 8 might stretch a bit past the time on the box.

Final Score: 3 Stars – Get your electrons zipping through the city on your tablet in this real-time, competitive slide puzzler!

Misses:
• Variable end game is unpredictable
• May lose appeal over time
• Components can fly off board