We review Fillit, an abstract strategy board game published by Big Cat Games. In Fillit, players are trying to be the first to get all of their pieces on to the game board. 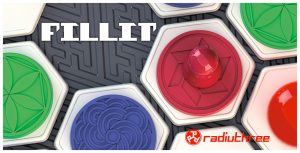 This has been a great year for me of getting exposed to Asian market games. I like finding titles that don’t seem to get a lot of attention here and finding the hidden gems. It has been interesting to see what they bring to the table and how they differ from what most hobby board gamers are accustomed to. You know, like IPs and tons of minis.

Fillit is one of three abstract Japanese board games looking to enter the broader market. It along with two others are currently being funded on Kickstarter. Fillit was designed by Ryo Nakamura, originally published by Radiuthree with English publication from Big Cat Games. It plays 2-4 players in about 20 minutes.

The goal of Fillit is to be the player or team who places all of their chips before anyone else. On a player’s turn, they must move their pawn and stone, which can be done in any order. The pawn moves in any single line directly from their current location until it reaches either the edge of the board or an obstacle, such as the center hex, stone, or another pawn. It’s in this movement that the player is placing their chips along the way and when you’ve placed all your chips, you win. Moving the stone simply means moving it one space from its current location, swapping places with whatever is in that hex.

One component not considered an obstacle is a color chip. As players forge their paths around the board, any time they pass over an opponent’s chips, they are returned to the player, allowing you to lay your chips down in their places.

The game allows for a few different setups. You can play with two or three players, with four players being played out in 2 vs 2 teams. The board is also double-sided, allowing two and three-player games to be played in a shorter or longer length.

I have always appreciated games when they are simple to learn, but reveal deeper layers of strategy with more plays. These games have usually offered very delightful experiences. I found that to be so with Fillit. Whether that was changing up the order of my actions to set up myself for laying more chips or finding ways to obstruct my opponent the next turn, having those key moments was fantastic. No matter what the player count was, the games felt simple yet strategic. My niece and I even tried the 4-player setup where we each controlled 2 pawns, which gave a sort of grander 2-player experience. Even though this setup was meant for 4 players, we very much enjoyed this matchup.

The game includes setups for shorter games, which I think provides a nice way for you to teach and play a fast game with a friend when time is limited. The “longer” games aren’t truly much longer, but it’s nice to have this versatility. And when time is a factor in deciding to play a game, you’ll be happy to know that teaching this game is pretty simple and straightforward. In fact, you can use my overview from earlier and you pretty much have all the rules. A shorter teach and a short playtime usually means more time to the table.

Something to note: although the game can be played with up to four players, this is limited to a team matchup and not a 4-player, every person for themselves. What’s a little confusing as both the cover to the game and the included components imply that you could play a straight-up four-player game, which would be neat. The instructions don’t offer a setup for this type of play. In fact, it doesn’t even tell you that you have yellow stones or chips, just a yellow pawn, when in fact they are included in the box. It’s a minor thing, but since there are other setups and play modes, it’s not like there’s a shortage of ways to play. This just would have been a nice addition.

Less is more. Life is busy. Time is a valuable commodity. I don’t have a lot of time to block out for gaming. When I find a game that’s not only able to be fit into quick sessions but also offers different ways to be played that are equally different yet satisfying, it’s likely to get played more often than my $100 minis games. For those reasons, I think Fillit makes for a versatile addition to anyone’s collection.

Hits:
• Easy to teach, quick to play
• Has a fun tug of war feel to it
• Versatile setups and player compositions mean more play opportunities

Misses:
• Would have liked to see a setup for four players taking on each other, not just a 2v2 team match