We review Fast Sloths, a racing game published by Stronghold Games. Fast Sloths is a family weight racing game that will have players trying to get their sloths to be the first to collect all of their leave tokens. 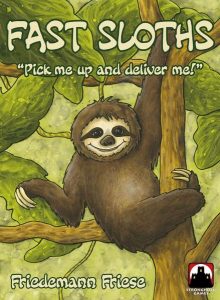 It’s hard to expect a normal game from the board game designer with green hair. He’s had games about monsters, a landlord, cats, cavemen, and fish markets. And now, Friedemann Friese has released a racing game focused around an animal that needs 15-18 hours of sleep and moves at a speed of two meters per minute. Yes, I am talking about the sloth.

Fast Sloths is indeed a racing game, where the competing sloths are trying to be the first to gather eight of their leaves that are spread about the board. But, as expected from sloths, they aren’t one to move very quickly, or even at all. The players, who are represented by sloths, are using a variety of animals to carry their sloth about the board to each of their leaves. Yes, it’s as weird as it sounds.

Players pick their own color of sloth and seed the board with nine leaves that match their color. They’re placed in the trees spread about the board. The game goes with the six chosen animals. Fast Sloths comes with 12 other animals that will actually be carrying the sloths from one leaf to the next. These range from elephants all the way to unicorns.

Turns in Fast Sloths are played in three steps. The first step is adding cards, with the number decreasing when leaves are gathered. When taking cards, they must be of three different species. Step 3 is to discard down to the hand limit denoted by the number of collected leaves. As for the optional Step 2, this is where the meat of the game happens.

A player can play cards of the same animal and add up the number at the top of the cards. This equals the movement points that the player can use to move and activate animals. Some animals, like the human, have one token that can be moved. Others can have as many as ten tokens, like the ants. The job of these animals is to move on or adjacent to a sloth, which allows them to pick up the active player. Movement points are used to carry a sloth or activate an ability, then the sloth is dropped either on or next to the final hex. Sloths can pick up leaves as they are moved through or dropped on. The first sloth to collect eight of their nine leaves wins.

Fast Sloths is a simple game with a lot of variability. The game comes with two double-sided boards that are used to form different maps. With 12 animals to select out of the box, the six used each game will be different and create different strategies each game. And like many games from Friedemann Friese, the art is penned by Harald Lieske, giving Fast Sloths a light-hearted look that matches the funky theme.

As you can tell from the overview, the actual game is quite easy to grasp. Draw cards of different types, play cards of one animal if you’d like, then check if you’re not over the hand limit. In many aspects, it feels quite like the classic family game Ticket to Ride. Now that’s a high bar to match, but just like Ticket to Ride, you’re gathering cards that best fit what you want to do on a turn and playing them all at once.

There are a couple of things that prevent Fast Sloths from being another hit to introduce to families. While boasting simplistic turns, there is a lot to keep track of in terms of rules. The hex board has seven different terrains, and each animal can only go in certain spots. Some of them make thematic sense, like the dolphin can only move in water. Other times looking at the correct terrain an animal can walk through is required due to a thematic disconnect. Rabbits can only run on grass, elephants can’t walk through forests, humans can only travel from village to village. Why? Because the cards say so, and because of that, a player can accidentally make a mistake and move an animal through a hex they can’t travel to.

The particular animal abilities must be taught upfront, and that’s also a bit intimidating for non-gamers. Remembering the symbology for six different cards that may be different from their previous play isn’t the best style of game for those not used to a game’s variability. Some of the symbology isn’t the clearest, particularly the ones that offer additional movement when playing that card. The symbol used on those cards is a plus or minus and a number over a few cards. Even experienced gamers were questioning if that was a one-time bonus or was a bonus for each card (it is a one-time bonus, FYI). The game also only includes one overview for the animals, and it is a large, double-sided sheet as opposed to something small that could be easily passed between players.

While minor complaints in terms of teaching this to inexperienced gamers, Fast Sloths suffers from a couple of flaws that keeps me from wanting to explore more of it. First of all, the game has a balancing mechanic that can bring the game to a crawl. In the racing genre, players want the feeling of zipping around the board, drifting through corners, and taking risks that could even damage the chances for victory. As more leaves are found, less cards are drawn, and at times you are required to discard before being able to move animals. After playing a large number of one animal and claiming your sixth or seventh leaf, you might be left with very few cards in your hand. This means for multiple turns, you will be keeping one card to build up for a move. That really isn’t fun and, coupled with the shrinking hand limit, it’s used to keep those falling behind from still being in competition.

The game can also feel repetitive. Draw cards, play cards, repeat. The same can be said for Ticket to Ride, but even then, there is tension due to the changing market, dwindling number of connections, and limit of one action per turn. The name is both correct and incorrect. Yes, you play as sloths, and yes, you feel like you’re playing sloths. But on half of the turns, you don’t feel fast. I understand why the second step is optional, otherwise animals would barely move. Then again, drawing cards for an entire turn in a racing game doesn’t allow it to feel like a race. There are occasional bursts of speed, like from the dolphin or the rabbits. But there will only be a couple of instances like that in an entire play.

I love the idea of Fast Sloths on paper. Different animals moving one of the slowest creatures on planet Earth? What a neat idea for a board game. Coupled with an easy turn structure and fun art, this should be a winner. But there are too many things working against Fast Sloths to feel like a winner for family games or the racing genre.

Final Score: 2 Stars – Repetitive gameplay and frustrating balancing system get in the way of a fun theme and goofy art.

Hits:
• Fun art and theme
• Lots of variability from boards and animals
• Easy to understand steps in a turn

Misses:
• Dull decisions and sluggish turns
• Descending draw and hand limit slows the game in the last third
• Not enough meat for a seasoned gamer
• Sluggish for a racing game