We review Fantasy Defense, a solo or two player board game published by Sweet Lemon Publishing. Fantasy Defense will have you trying to defend your castle against a horde of invading monsters. 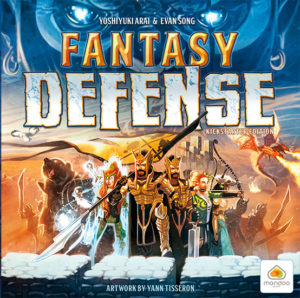 When gamers talk about niche player count games, it hardly gets more niche than 1-2 player games. These are specifically games that work well solo, or, if gamers manage to trick a Tinder date into playing board games, also work with two. The next game up for consideration is aptly, if unimaginatively, called Fantasy Defense.

This wall defense game has stalwart defenders of human and elvish heritage keeping out some bad hombres… invaders of the goblinoid and dragon persuasion. It’s a quick game. Not nearly as quick as the 15 min described on the box, but certainly less than an hour.

A row of wall tiles sets the stage for the game. In the two-player version, each player has their own wall to defend and their own deck of defenders. One player takes the elvish deck, the other, humans.

In addition to a deck of defender cards, each player receives two spell cards face-up at the beginning of the game and adds to their starting hand an extra powerful hero card. The spells are one-time-use abilities, and the hero can be played along with any other defenders drawn from the deck. The hero’s special ability is meant to be used strategically throughout a game.

Finally, an invader deck features all the nasties who are arrive attacking each section of the wall. These are drawn and placed either to the left or right positions based on the arrows on the card. If an invader card should be placed but another invader already occupies a position, the new card shifts over until it can find an empty wall section.

After each new draw of invaders at the beginning of a turn, the next phase has the players allocating defense units to the various sections of the wall. Players can play as many units as they like to each section with the aim of the total defense values of defenders equaling or exceeding the combat value of the attacker. Units which are already on the table at the beginning of the turn can move one position left or right. In addition, other unit abilities from played cards and spell abilities can also take effect during this phase.

After a wave of “Underling” invaders has attacked, a Boss appears who is MUCH stronger than the regular invaders. Even if this Boss is defeated, a wave of Elite invaders then attacks, followed by another Boss. If the players manage to survive all of this and still have defenders at the wall, they win. If at any point they run out of morale points, then invaders win.

Fantasy Defense, despite the ridiculous name (really? they couldn’t come up with anything better?), is a good game. It’s got strategy and engagement with each turn; it just doesn’t have a very long shelf life. Once the game is enjoyed a few times, it quickly wants to be gifted to a friend.

Additionally, unless you’ve traveled through time and just arrived in 2018 from 1990 when Klondike first made its appearance on Windows, Fantasy Defense will feel a bit tired. There is certainly strategy and some interesting activity here, but the overall feeling is one of playing solitaire. Gamers who enjoy that play format but have been looking for a fantasy will be the main gamers rewarded.

The other noticeable thing is that despite the attention paid to the art, which is excellent, the same cannot be said of the rules. They are very good, but a few key bits of information are oddly placed or are missing. In addition, the game assumes the two-player mode is the optional way to play. In this reviewer’s experience, the two-player game should be the default and the solo play should be the alt-play style. For a gaming couple, this is definitely a good casual choice of game.

Finally, some comments need to be made about the expansion provided via Kickstarter. While it does earn marks for packaging itself like a legacy game, it really isn’t. There’s not enough story or modifications in play from session to session. Without spoiling it, some of the content that really shines occurs halfway through the pack and gamers who really don’t care much about the “story” (a pretty weak story in this type of game) would do well to just open all the packs.

Fantasy Defense, which should really be called Heroic Defenders, is a good product, but small misses and a relatively tired play style take it down. Enjoyed once or twice and regifted, it’s rewarding. As for long term ownership, there’s not much here that a standard deck of cards can’t achieve as well. Unless gamers were desperate for themed solitaire, they’re better off with other theme and story heavy solo play games.

Misses:
• Often feels like solitaire
• Not a huge amount of replay